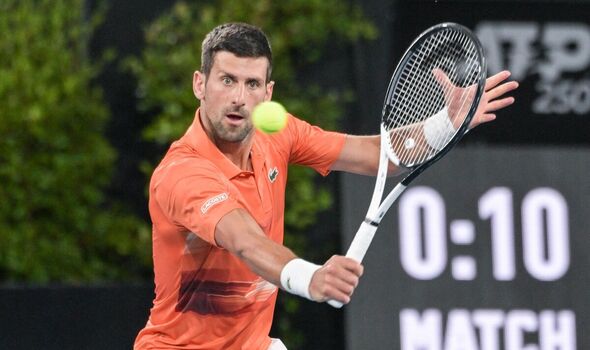 Novak Djokovic defeated Daniil Medvedev 6-3 6-4 to reach the Adelaide International final and send a clear message to his rivals ahead of the Australian Open. The top seed needed a medical time out for what appeared to be a muscle tweak but stayed strong and was able to topple one of his biggest rivals in recent years after just an hour and 30 minutes.

Djokovic and Medvedev were renewing their rivalry with a 13th meeting and their third in the space of three months as they took to the court for the Adelaide International semi-final, with Sebastian Korda already awaiting the winner in Sunday’s final. It was the top seed who appeared to be on cruise control as he took an early break to go 3-1 up.

But the mood shifted as the 35-year-old could then be seen stretching out his legs between rallies as Medvedev tried to impose himself on the struggling Serb. The third seed set up his first break point of the match at 2-4 down but failed to take it as Djokovic held to go within a game of the first set when he suddenly called the physio to court.

The doctor opted to take the world No 5 off court for a medical timeout after several instances that saw him continue to lunge and stretch out his left thigh as commentators suggested that he may have slightly tweaked a muscle. Djokovic returned and was able to serve out the set 6-3 in 45 minutes but continued to stretch between points and could be seen gesturing to his team in frustration at the change of ends.

Although Djokovic didn’t appear to be at 100 per cent as he threw in serve and volleys to keep the points short, Medvedev couldn’t take advantage of his opponents physical concerns and grew frustrated as he failed to get a look in on the Serb’s serve. And the top seed started to get back to his top level with a love-hold to level things at 3-3, with his off-court treatment finally kicking in.

And he was able to create the first break point of the set a game later, as a costly error from the Medvedev racket gifted the top seed the game and Djokovic took a commanding set-and-break lead. It was the Russian’s turn to step up as he earned two break-back points but the world No 5 pulled off the escape and managed to put himself within a game of the match at 5-3 as Medvedev appeared to mock Djokovic’s previously stretching movements.

The 26-year-old responded to his failed attempts to break the Djokovic serve with a quick love-hold, forcing the 91-time title winner to serve out the victory himself. And despite a late resurgence from Medvedev, the top seed was able to close out a 6-3 6-4 victory to extend his head-to-head over the Russian to nine wins against four losses.

It was something of a statement performance from Djokovic ahead of the Australian Open, with Medvedev one of the few players many believe could stop the nine-time title winner in Melbourne from adding to his trophy cabinet. With even the former world No 1 unable to dismantle a physically hampered Djokovic on Australian soil, his impending rivals will need to do a lot more if they want to beat him.

Djokovic will now face Korda in Sunday’s final, in what will be a first meeting between the 21-time Grand Slam champion and the 22-year-old. Korda advanced after Yoshihito Nishioka retired from their semi-final clash earlier in the day, with the American already leading 7-6(5) 1-0.

Speaking about the prospect of facing Djokovic for the first time, the world No 33 said: “Yeah, I mean, it’s massive. Playing either against Novak Djokovic, one of the greatest of all time, or Medvedev, who in the last couple years has been on the top. I’m really excited for it.  It’s going to be a great learning experience for me no matter what the outcome. But I’m going to go for the win tomorrow and I’m going to give it my all.”