After winning her Roland Garros semi-final to become the youngest grand slam finalist in 18 years, Coco Gauff’s first action was to take her pen to a TV camera and write: ‘Peace. End Gun Violence.’

It seems eons ago that such an action would have brought reprimands and bans for a player sullying the purity of sport with a political statement. Here in 2022, Gauff’s gesture was wholly supported and endorsed, not just for its sentiment – who, aside from a handful living under rocks, wants to prolong gun violence? – but also as an expression of freedom.

“I woke up this morning and I saw there was another shooting [in America], and I think it’s just crazy,” Gauff said later. “I think that was just a message for the people back at home to watch and for people who are all around the world to watch. Hopefully, it gets into the heads of people in office to hopefully change things.”

Gauff, a young African American still of school age, had recent personal experience, with friends who had been terrorised by a school shooter in Florida. But the uprising against American gun laws has unified all ages and races. Days earlier, basketball coach and former player Steve Kerr, a 56-year-old white man at the opposite end of his career from Gauff, wept and thumped the table as he pleaded at a press conference for his NBA team, the Golden State Warriors. “When are we going to do something?” a distressed Kerr asked. “I’m tired. I’m so tired of getting up here and offering condolences to the devastated families that are out there.”

Is it the place of sportspeople to make political or social statements? It hardly matters: that ship has long sailed. What is more arresting now is if such interventions are becoming so normalised and so acceptable that the market becomes flooded and, as freedom of speech spreads, the impact of such speech is diluted and social causes fall into the consumerist blah, just another part of the ritual.

The influence of social media cannot be underestimated or, in this case, necessarily derided. Everyone from an 18-year-old tennis player to a 56-year-old basketball coach is so acclimatised to the free exchange of words thumbed onto their electronic device that to speak freely in public is a natural and possibly unconscious extension of those conversations that have filled their heads. Rules imposed from above by sports administrators are barely relevant. As events in Australia over the past week have illustrated, hierarchies of information have flattened out to such a degree that communities have advanced well ahead of policy-makers on the most important issues. For sporting authorities to clamp down on the likes of Gauff and Kerr would expose them to ridicule. How far we have come, so fast. 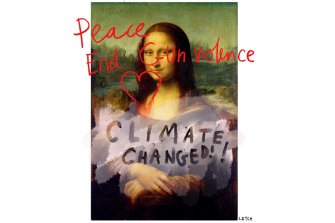 But the natural endpoint of these statements will also be a dilution in their impact. Audiences consume these statements as if they are watching the home shopping channel. Thousands of public voices with every ounce of influence have spoken against gun violence in America for decades now. Those voices have had no impact on either the shooters or those who put guns in their hands. More voices, expanding into sports and entertainment, are unlikely to staunch the wound, and the greater their proliferation, the smaller their individual impact. Which is no reason for them not to speak up, but the economics of speech – the greater the supply, the lower the value – work powerfully against the possibility of those words sparking actual change.

Perhaps the sharper question to ask is not so much about the issue as the principle. If the mainstream is happy to hear sportspeople condemn gun violence, is it because we endorse their freedom to speak, or just because we agree with them?

What if the tennis player wrote on the camera, ‘Don’t get vaccinated? Or ‘I am a proud Russian’? Is free speech such a beautiful thing then?

We know those answers already because those messages have been scrawled, figuratively, this year by Novak Djokovic, Daniil Medvedev and others, and firmly adjudicated and sanctioned. When the message is unacceptable, the principle of free speech is not so cherished. 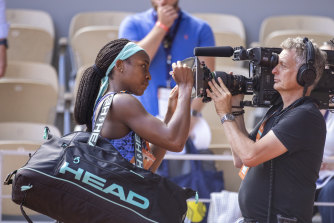 Coco Gauff writes an anti-gun-violence message on the camera.Credit:Corbis via Getty

This is not new either: there have always been limitations on free speech even in the most liberal societies. But in the sporting world, literally a globe with an audience of eight billion, the idea of a ‘truth universally accepted’ is a western construction, every bit as fictitious as a line from Jane Austen. The line of acceptable versus unacceptable speech is constantly shifting and splitting in different places around the world, and it is dangerous and frankly imperialist to make assumptions about what we ‘all’ agree on.

It is to be celebrated that an African-American teenaged woman can freely send a message to the world from a tennis court in Paris and receive nothing but congratulations and support. Not very long ago, she would have been muzzled. Not long before that, she would have faced too many obstacles to reach that level of her sport. It’s hard not to see all of these as markers of progress over time.

But feeling good about these things is not the end of the story, much as we would like it to be. Tennis fans feeling good won’t stop the next shooting. A raised consciousness can give as much pleasure, and be of as much consequence, as a product safely purchased online.

It also feeds a comforting groupthink that is quick to set rules about what can and cannot be said. The road to intolerance, as Orwell wrote in 1984, is paved not with controversy but with words that we all agree upon.

The most powerful statements, in that world, are those ‘that tell you what you already know’. The test is how we tolerate being told what the groupthink doesn’t endorse, what we don’t think we already know, and what takes us out of the warm bath of consumption.

Watch every match from Roland Garros ad-free, live & on demand on Stan Sport, with courts streaming in 4K UHD.