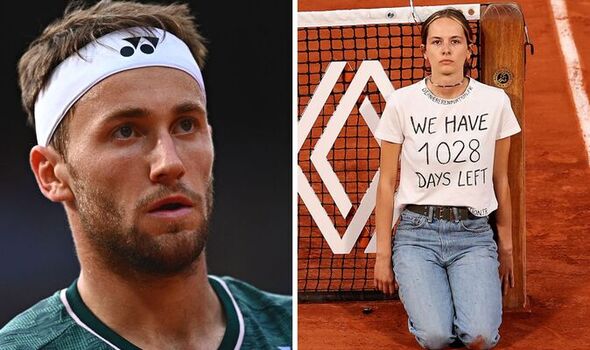 Casper Ruud has admitted he was left “scared” after a protestor managed to get onto Court Philippe-Chatrier and chain herself to the net midway through his semi-final with Maric Cilic. The Norwegian reached his first-ever Grand Slam final after recovering from the incident to close out a four-set win and will face his “idol” Rafael Nadal on Sunday.

It was a bizarre men’s semi-final day at Roland Garros on Friday after Alexander Zverev suffered a freak ankle injury and was taken off court in a wheelchair, retiring to Nadal. And things became more unprecedented as a 22-year-old girl managed to get onto the court and chained herself to the net during Ruud and Cilic’s semi-final as part of a climate protest.

Ruud was serving at 4-1 in the third set, with the pair having split the first two, when play had to stop as security removed the girl and the players were taken off court. The 23-year-old closed out a 3-6 6-4 6-2 6-2 victory when they returned to Philippe-Chatrier to book a spot in his maiden Grand Slam final but admitted afterwards that the situation “scared” him.

“[I was] a bit scared, honestly. I didn’t really know what was going on,” the eighth seed said. “When it comes to this protest, it was a little bit…what should I say…nasty is maybe a good word. I didn’t really know how to react to it.” French activist group Derniere Renovation were quick to post to their social media accounts and website as soon as the 22-year-old named Alizee chained herself to the net wearing a t-shirt that read ‘WE HAVE 1028 DAYS LEFT’.

JUST IN: Nadal will ‘try everything’ to be at Wimbledon as withdrawal rubbished

“We are in 2022 and it is time to face reality, the world to which politicians are sending us is a world to which Roland Garros will no longer be able to exist,” she was quoted as saying on their website. “Today, I entered the field because I can no longer take the risk of doing nothing in the face of the climate emergency.”

But Ruud didn’t understand what was going on and couldn’t see what the woman was doing . “I didn’t know if – because I only saw her back – I didn’t know if she was holding anything or what was around her neck. I didn’t get to see too much.”

Roland Garros later released a statement on the incident, confirming Alizee had been turned over to the police. “At 9.12 p.m., an environmental activist managed to get onto Philippe-Chatrier court and attached herself to the net with metal wires and glue,” it read.

“The security team needed to formally identify the objects she used to get onto the court before they could remove her. The players were escorted to the changing rooms. The score was 3-6, 6-4, 4-1 to Casper Ruud against Marin Cilic. Play was suspended for 13 minutes, and resumed at 9.25 p.m. The young woman, of French nationality, entered the grounds with a valid ticket early in the day. She was then handed over to the police.”