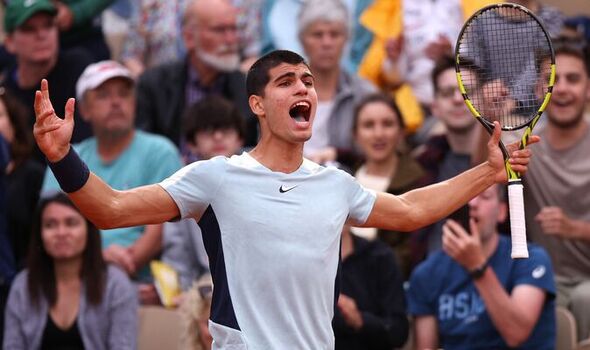 Carlos Alcaraz survived a huge scare as he saved a match point and came from a break down in the fifth set to outlast Albert Ramos-Vinolas 6-1 6-7(7) 5-7 7-6(2) 6-4 at the French Open. The 19-year-old is one of the favourites to win the title alongside seasoned Grand Slam champions Novak Djokovic and Rafael Nadal but advanced to the third round by the skin of his teeth after four hours and 34 minutes.

Alcaraz was facing Ramos-Vinolas for the third time, already holding a 2-0 winning record against his countryman – beating him in his first-ever match on the ATP Tour at the Rio Open in 2020 before downing him in the Umag semi-final last year en route to his first title. Now a different beast as the world No 6 and a favourite for the French Open title, he started strong against the world No 44.

Both men opened the match with a service hold each before the 19-year-old took control, reeling off five games on the bounce to close out the opening set 6-1 in less than half an hour, with Ramos-Vinolas winning just three points on the Alcaraz serve in the entire first set. But the 34-year-old hit back by opening the second set with a hold and settled into the match.

The former world No 17 was then forced to save four break points in his next two service games before causing Alcaraz some trouble by going 0-30 up on his serve at 5-5 before the second set went to a tiebreak. The pair traded mini-breaks, with Alcaraz saving a set point on one, before the elder Spaniard pounced at a crucial moment and took the set 7-6(7) after 72 minutes. It was all Ramos-Vinolas afterwards, with the 34-year-old breaking Alcaraz in the third game of the third set to take the lead for the first time in the match.

The 19-year-old managed to convert his fourth break point in the next to level things for 3-3, but he was broken at a pivotal moment, giving Ramos-Vinolas the chance to go up 6-5 and close out the set 7-5, giving himself a two-sets-to-one lead over one of the heavy favourites for the title. But Alcaraz didn’t go away, instead breaking at the first opportunity in the fourth set to lead 2-0 before his compatriot broke straight back.

Ramos-Vinolas continued to find the right moments to break the 19-year-old’s serve, taking the lead again at 5-4 in the fourth to serve for the match. The 19-year-old gave himself a lifeline with a break point at 30-40 which was saved Alcaraz a match point to give himself a second chance to break, and he converted it to stay alive in the second round by the skin of his teeth.

Alcaraz held on to put himself back in front in the fourth set and guarantee himself at least a tiebreak. The pressure was then on Ramos-Vinolas, who was forced to save three set points in a game that lasted more than ten minutes. Ramos-Vinolas finally held on his fifth game point with an error on return from Alcaraz, with the set going to a tiebreak. Like the second-set breaker, it was the 19-year-old who took the first mini-break to lead 2-1 and he sent a ball long to get things back on serve at 3-2 but won the next four points to take the tiebreak 7-2 and force a decider.

The four-time title winner broke in Alcaraz’s first service game of the decider to lead 2-0 and the younger Spaniard was unable to convert a break point to level things in the game after, giving Ramos-Vinolas a 3-0 lead. But Alcaraz stormed back and won four games in a row to lead by a break at 4-3 and put himself within two games of the comeback victory.

But it was a 14th break of serve in the rollercoaster match as the former world No 17 got back to 4-4 and saved two break points before he started to tire as Alcaraz broke once again to serve for a comeback victory at 5-4 with a netted shot from the 34-year-old, who threw his racket in frustration before Alcaraz served out a 6-1 6-7(6) 5-7 7-6(2) 6-4 victory to love.

Alcaraz will next face the winner of a match between another top young player in Sebastian Korda and seasoned Frenchman Richard Gasquet. Korda is the last player to have beaten the 19-year-old in what was Alcaraz’s opening match at the Monte Carlo Masters and his first match after becoming the Miami Open champion. He then went on to win the Barcelona ATP 500 and a second Masters title in Madrid, beating Djokovic and Nadal en route, and is now on a 12 match-winning streak following his comeback second round victory in Paris.