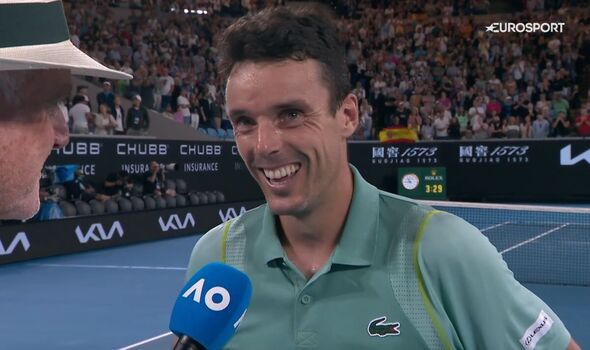 Roberto Bautista Agut ended Andy Murray’s epic Australian Open run in the third round on Saturday as he sent the Brit packing 6-1 6-7(7) 6-3 6-4. The Margaret Court Arena crowd continued to spur the three-time Major champion on but it was the Spaniard who prevailed in the end, and he was praised for showing his “understanding” towards the pro-Murray fans after the match.

Murray’s Australian Open run ended in the third round after two monumental five-set wins in his opening rounds. The former world No 1 played the longest match of his career with his latest finish in his second tie against Thanasi Kokkinakis but was unable to repeat his heroics against Bautista Agut despite taking an early break lead in the fourth set.

The five-time finalist in Melbourne was back playing on Margaret Court Arena less than 48 hours after his five-hour-and-45-minute victory over Kokkinakis and the fans were out in full force once again to cheer him on to another comeback win. While some players would struggle to play against the crowd as well as their opponent, the 24th seed kept his calm and later admitted that he understood why they would want to side with the world No 66.

“Always playing Andy in a Slam is very tough, he knows the game very well,” Bautista Agut said during his on-court interview. “He knows very well how to play a Grand Slam match so I’m very happy how I managed all the nerves and all the tension during all the match and I could play very good tennis and I’m very happy about the win.”

We’ll be bringing you the very latest updates, pictures and video on this breaking news story.
For the latest news and breaking news visit: express.co.uk/sport/football
Stay up to date with all the big headlines, pictures, analysis, opinion and video on the stories that matter to you.
Follow us on Twitter @dexpress_sport – the official Daily Express & Express.co.uk Twitter account – providing real news in real time.
We’re also on Facebook @dailyexpresssport – offering your must-see news, features, videos and pictures throughout the day to like, comment and share from the Daily Express, Sunday Express and Express.co.uk.