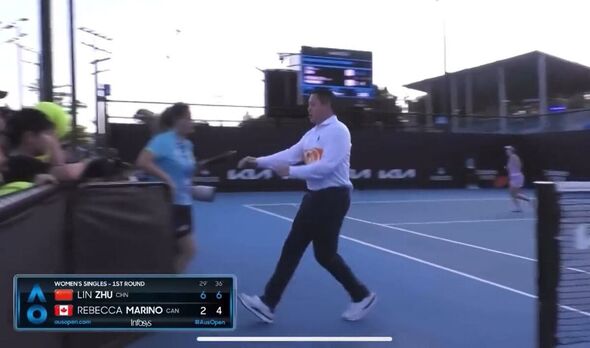 There was bizarre drama on day two of the Australian Open when British umpire James Keothavong chased a fan out of one of the outside courts at Melbourne Park after towels were stolen after the match. Lin Zhu had just registered an impressive win over Rebecca Marino in her first-round tie when she went over to shake hands with the umpire.

But there were wild scenes on the court after the handshakes when Marino held her hands out in amazement and said someone had taken her opponent’s towel. “Somebody just took your towel!” Marino said to Lin.

Keothavong reacted in fury to the news that the player’s towel had been stolen, leaping out of his chair. According to Eurosport, separate fans were able to steal two towels from the court.

The match umpire began shouting “wait” as he ran out of the court to chase after the culprit. Cameras were unable to keep up with Keothavong as he made his way out of Court 14 to continue his pursuit.

It’s not clear whether the British umpire caught up with the offender and if the towels were retrieved. Zhu, ranked No 87 in the world, has never made it past the second round of the Australian Open before.

She could have faced Britain’s Harriet Dart in the next round, but the 26-year-old lost to No 32 seed Jil Teichmann. The Australian Open umpires have already had a busy tournament with numerous on-court debates with players this year.

Rafael Nadal complained during his match against Jack Draper over the floodlights coming on during their match. The lights were turned on at the start of the fourth set, to the annoyance of Nadal.

“Now it is bothering me a lot,” Nadal said to the umpire while pointing up to the floodlights,” Nadal said. “The combination of lights.”

Draper too made his frustrations clear at the lights coming on as there was not a lack of light for the day session. Marie Bouzkova also complained to the match umpire during her clash with Bianca Andreescu for the Canadian’s “screaming”.

The No 25 seed was on serve in the second set and looking to claw her way back into the match when a weak shot over the net was pounced on by Andreescu, who let out a screeching scream just as the ball made it’s way to the opposite side of the court.