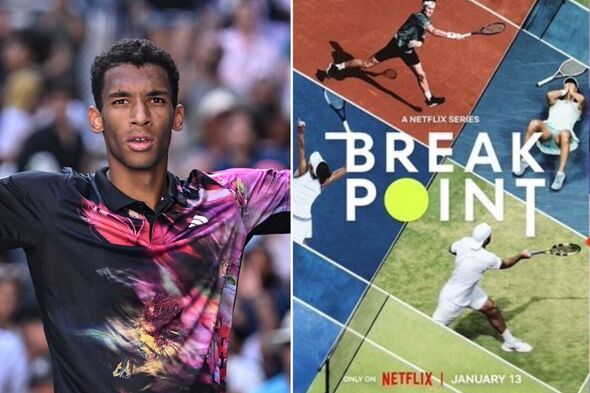 Felix Auger Aliassime is the last of the tennis stars to have featured in the Netflix series ‘Break Point’ left standing at the Australian Open after Maria Sakkari was knocked out by Zhu Lin in the third round. The No 6 seed is the ninth player from the series to be dumped out during the first week amid talk that a ‘Netlfix curse’ has enveloped the competition.

‘Break Point’ was released earlier this month and followed the lives of ten tennis players as they made their way through 2022. However, those involved have not enjoyed the best luck in Melbourne for the first Grand Slam tournament of the year.

Nick Kyrgios, Paula Badosa and Ajla Tomljanovic all withdrew before the tournament began due to injury before Matteo Berrettini failed to overcome Andy Murray in the first round.

Casper Ruud, Ons Jabeur, Taylor Fritz and Thanasi Kokkinakis all saw their progress end in the second round. Sakkari followed in round three with her 7-6(3), 1-6, 6-4 to Zhu leaving Auger Aliassime as the last player standing in Melbourne.

JUST IN: Cam Norrie admits he ‘peaked too early’ after Australian Open exit

The Canadian will face Jiri Lehecka for a place in the quarter-finals on Sunday after the Czech star beat British No 1 Cameron Norrie in the third round. However, the 22-year-old has laughed off talk of a curse despite the fate of his fellow Netflix stars.

Sakkari had been expected to go far into the tournament as the No 6 seed but was not able to overcome the unseeded Zhu despite the vast disparity between the pair in the world rankings. The world No 87 will face two-time champion Victoria Azarenka for a place in the quarters as she enjoys the best Grand Slam performance of her career.

Ahead of the encounter Sakkari had also downplayed talk of the curse but may now feel differently after her defeat.

“I personally have to say that they only bring us luck,” she said. “I enjoyed my time with them because they are nice people. Trust me, they are very, very nice.

“You know, if you let these thoughts and this energy affect you, then it’s when bad luck comes. I would say that because they are all very nice and they are all very respectful, they have only brought me good luck.”