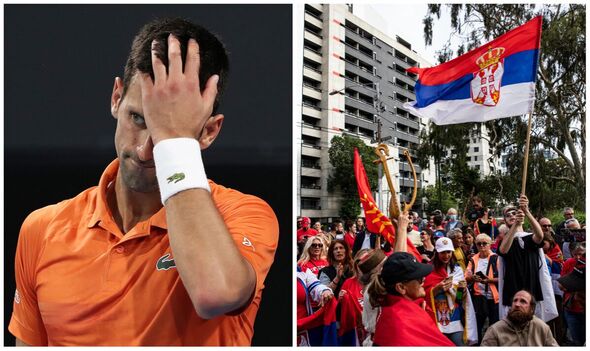 Novak Djokovic caused the 2022 Australian Open draw to be postponed 12 months ago as the vaccine farce that affected his entire year boiled over in Melbourne. The Serb believed he had a medical exemption to play at the tournament and amid a high-profile legal battle, uncertainty over his eligibility to compete rumbled on right up to the start of the competition.

Djokovic remains unvaccinated against COVID-19 and only Australia’s more lenient restrictions mean he can play at the 2023 Australian Open this month. It was initially thought that he might be barred from the country for a further three years having been deported.

The 21-times Grand Slam champion’s vaccination status caused chaos last year and forced the draw to be postponed until it was confirmed that he would not be able to play. Tennis Australia initially planned to host the draw at 3PM local time on January 13, but it was put back until later in the day.

In bizarre scenes, with the live feed already running, The Times reported that the draw had been “cancelled until further notice”. The stream for the draw, which had started just after 3PM, was cut.

JUST IN: Novak Djokovic responds to ‘angry’ Australians making him a ‘villain’

The publication had sought clarity from a steward that the draw would go ahead as planned just two minutes before it was postponed. It was initially unclear why the event had been halted so suddenly, but it was later reported by the Guardian that it had been moved to 4:15PM as the status of Djokovic was unknown.

Tournament rules stated that Djokovic would be replaced by someone who lost during qualifying if he dropped out after the Day One order of play was released. If he dropped out during the tournament, his opponent would be granted a walkover and advance in the bracket.

Then ranked as the world No 1, Djokovic believed he had a valid medical exemption to enter Australia. However, his visa was denied and revoked following a lengthy legal back-and-forth that also saw him detained in an immigration centre.

Scott Morrison, the then-prime minister, slammed the Serb, accusing him of breaching the country’s border rules. Morrison, who lost the top job following a disappointing election defeat just months later, told journalists: “You either have to be vaccinated or you have to have a valid medical exemption and show evidence of it. It’s as simple as that.”

Andrews said that should Djokovic return to Australia with compelling reasons in the future “that may be looked at but that’s all hypothetical at this point”.

Djokovic’s ban has since been overturned, with a new government now in place. The 35-year-old remains unvaccinated and will face trouble getting into the United States later this year, but for now he can compete for a 10th Australian Open title.