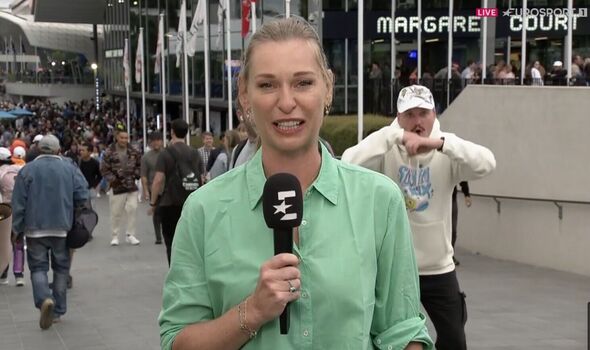 An Australian Open spectator caused disruption on Eurosport’s coverage of day four of the tournament as they were caught live on TV making a lewd sex act gesture behind the back of Barbara Schett. The former world No 7, who now presents Eurosport’s tennis coverage, was standing in the middle of Melbourne Park previewing the days tennis.

Eurosport had just shown a fun interview Schett did with Ons Jabeur, where there was plenty of laughs in the studio. The broadcast then cut to Schett in Melbourne Park with Tem Henman, Mats Wilander and Alize Lim in hysterics at the Jabeur interview.

The funniest part of the chat between Schett and Jabeur saw the Tunisian tennis star trying to guess Chris Hemsworth’s name by looking at a picture of his face. Jabeur appeared to know who the actor was, mimicking the Thor hammer with her hands.

But Schett and others in the studio for the interview reacted with laughter as the gesture looked like something else. Speaking after the interview, Schett joked that she “could barely” stay serious with Jabeur.

However, her broadcast was soon interrupted by a fan wanting his 10 seconds of fame live on TV. The man, wearing a white graphic hoody and a cap, stood behind Schett and began making a lewd sex act gesture with both of his hands and mouth.

It appeared as though the man was quickly told to move by those behind the camera and he soon left the scene. Schett was seemingly unaware of what happened behind her as she continued with her coverage as normal.