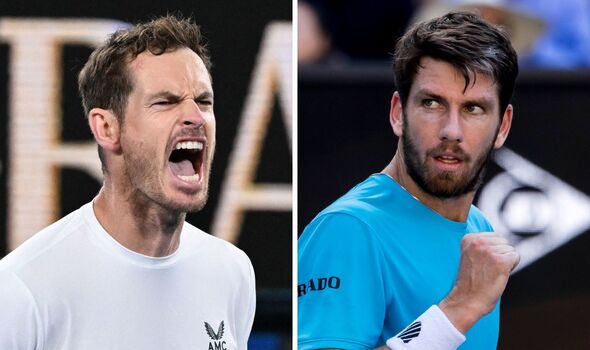 British No 1 Cam Norrie was left surprised to see Andy Murray still inside Melbourne Park past sunrise on Friday morning following his compatriot’s exhausting win over Thanasi Kokkinakis. Most were all tucked up in bed when Murray and Kokkinakis were still out on the Margaret Court Arena for their thrilling second-round match.

Murray looked on the verge of a disappointing exit after going two sets and a break down against the Aussie, but embarked on a miraculous comeback for the ages. It was gone past 4am in Melbourne when Murray finally got the job done against Kokkinakis after five hours and 45 minutes on court.

The Brit still had some media duties to take care of before going off to bed as well as a cool down and it seems as though he was still there after sunrise with Norrie admitting that he spotted Murray inside Melbourne Park as he began his preparations for his third-round match. Norrie was unable to match his compatriot’s feat after losing in five sets to Jiri Lehecka.

The British No 1 lavished praise on Murray for his incredible achievement and even tipped the three-time major champion as one to beat at the Australian Open. “It was amazing watching Andy yesterday,” he said.

“Even thinking today I was down 4-1 in the first, and I was, like, this is nothing compared to what he came back from yesterday, which was really cool to see. Obviously, I didn’t stay up last night and watch that. Yeah, it can be tough to get to sleep after those matches.

“I even saw Andy here this morning pretty early still. Yeah, I think I don’t really look at the clock, but it was maybe 3:30, 4:00. But obviously with all the adrenaline from the match and everything, it’s tough.

“For me I had a lot of time. I had the day off yesterday to practice, and I played a reasonable time today. So, yeah, it can be tough. Andy was finishing at a ridiculous hour. It can be brutal for him. It’s going to be a tough turnaround for him.

“He looks ready, and he is moving well. If anyone can do it, he can keep going.”

Murray will now have to find time to rest in time for his third-round match against Roberto Bautista Agut, but the Brit admits he’s feeling fine physically. “I mean, by far the longest match that I played. The conditions, that’s what’s going to happen,” he said.

“You play in cold conditions, at that time of the day, with balls like that, you’re going to get long rallies, long points. Yeah, I mean, I actually felt better on the court today physically than I did the other day, which is a positive thing. But, yeah, finishing at four isn’t ideal.”