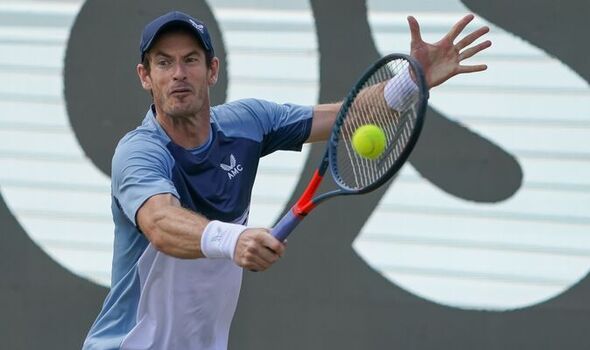 Andy Murray has provided a fresh update on his abdominal injury with Wimbledon just a week away. The two-time champion at SW19 suffered a strain in his recent Stuttgart final and was forced to pull out of Queen’s. He has now claimed the next couple of days will be “important” as he still intends to play his home Grand Slam tournament

Murray had reached the semi-final in Surbiton and the final in Stuttgart, when he suffered an abdominal strain that threw his Wimbledon preparations into disarray. The world No 51 has now provided an update on his injury after training at the All England Club, and still intends to play Wimbledon which begins in just seven days’ time.

“The next couple of days are pretty important for me,” he said of his Wimbledon hopes. “Obviously the plan is still to play. The injury that I had is improving.” The 35-year-old admitted that he was feeling better but had been unable to practise certain shots since picking up the injury and was hoping to reintroduce them in the coming days. “I’m feeling better than I was on the Sunday afternoon, evening. Training has been going well in some aspects. With the nature of the injury, it’s not stopped me from practising. I’ve been able to do a lot of work on the court, but there’s specific shots that I haven’t been able to practice yet,” he admitted.

“In the next couple of days, we’ll start to do that. The positive is that I’ve been able to get on the practice court and hit balls and work on a lot of different things, but there’s specific shots that I have not been able to practise and that has obviously hampered the preparations. In the next couple of days, I’ll have to start to increase that and test it to see where it’s at.”

While Murray tried to remain coy on which shots had been affected by the injury, it appeared that he had been unable to serve over the last week. He continued: “I’ve had it rescanned since then and it’s progressing in the right way. But you can probably work out from the nature of the injury which shots it is that I’ve been struggling with and haven’t been able to practise. In the next few days, I’ll start to increase that and test it out. And hopefully it’s recovered sufficiently.

“I don’t want to go into the specifics of what shots exactly I haven’t been able to do. But based on the injury that I have, there’s some things that are more difficult than others. And I’ve been able to practise pretty well. I’ve worked on lots of different things and it’s not stopped me from being on the court, but it has resulted in me missing certain elements of practice which isn’t ideal. But the next few days are important for me to start to increase the training start to hopefully get to play some points. And things to see where I’m at.”