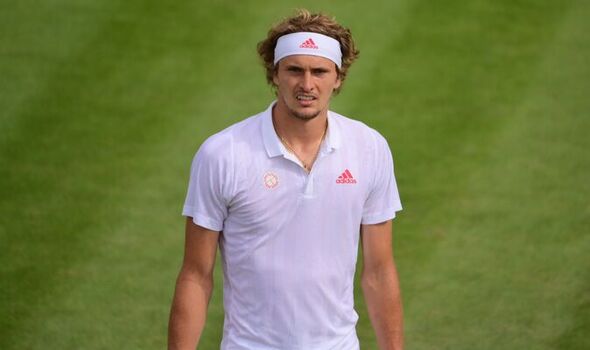 Alexander Zverev has officially withdrawn from Wimbledon following his surgery for an injury he picked up in his French Open semi-final. With Russian world No 1 Daniil Medvedev banned from the tournament and the new world No 2 now forced out after tearing several ligaments in his ankle, it marks the first time in ATP ranking history that the top two players will be missing The Championships.

Zverev was not expected to play Wimbledon following the injury he picked up in his French Open semi-final against Rafael Nadal, as he went down screaming in pain and needed to be taken off court in a wheelchair, retiring the match and later revealing he underwent surgery after tearing several ligaments in his ankle.

The German was set to be the top seed at a Grand Slam tournament for the first time after rising to a career-high of world No 2, with top-ranked Medvedev banned from Wimbledon along with his other Russian and Belarusian colleagues. It means world Nos 3 and 4 Novak Djokovic and Nadal are set to be the top two seeds at The Championships.

With Medvedev and Zverev both out of Wimbledon, it marks the first time since ATP rankings were introduced back in 1973 that the world Nos 1 and 2 would not be appearing at the All England Club.

JUST IN: Nick Kyrgios calls out Nadal as he throws strop and refuses to play

The 25-year-old is set to be out of competition for at least six to eight weeks in an early timeline for his recovery reported by L’Equipe. The world No 2  is reportedly hoping to be back in August ahead of the US Open, where he could get some warm-up tournaments under his belt at the Masters 1000 events in Canada and Cincinnati.

Zverev revealed he had undergone surgery in a recent Instagram post, writing: “We all have our own journey in life. This is part of mine. Next week I’ll reach a career high ranking of number 2 in the world, but this morning I had to undergo surgery. After further examination in Germany, we received confirmation that all three of the lateral ligaments in my right ankle were torn.

“To return to competition as quickly as possible, to ensure all the ligaments heal properly, and to reclaim full stability in my ankle, surgery was the best choice. My rehab starts now and I’ll do everything to come back stronger than ever!”

Meanwhile, Medvedev has been proving he would have been a strong contender at Wimbledon had he not been banned, as he reached the final of last week’s Libema Open and began his Halle campaign with a 6-3 6-2 win over David Goffin.