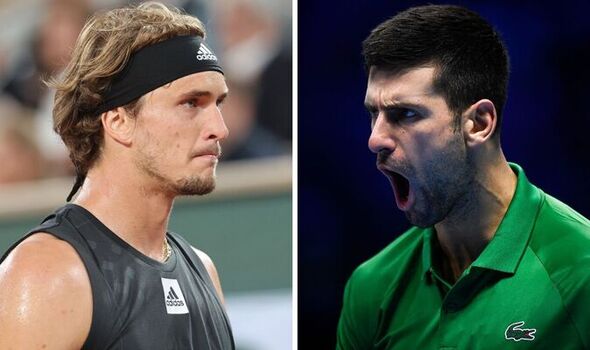 Alexander Zverev has learned his fate at the World Tennis League as the German will face Novak Djokovic in one of the first matches of his comeback next month. Zverev has not been seen on a match court since going down injured at the French Open in June as his season was derailed by injuries when he snapped three ligaments before being diagnosed with a bone edema.

Zverev will finally make his comeback at two exhibition tournaments next month before returning to the official tennis tour for the 2023 season. The former world No 2 was in some of the best form of his life at the French Open earlier this year before he went down screaming in pain during his semi-final against Nadal and needed a wheelchair to be taken off the court in what turned out to be his last match of the season.

The 25-year-old had been set to make a comeback at September’s Davis Cup group stage but revealed he had been diagnosed with a bone edema before undergoing more surgery. But his comeback is now on the horizon as Zverev will play the Diriyah Tennis Cup before heading to the brand new World Tennis League in Dubai, where he will face Djokovic in a tough return to competition.

The mixed-gender team event is a new addition to the line-up of exhibitions in December and will see the likes of Zverev, Djokovic and Nick Kyrgios team up with top WTA stars including world No 1 Iga Swiatek and Wimbledon champion Elena Rybakina to battle it out in round-robin matches for a spot in the final. And fans are already guaranteed to see some blockbuster clashes as tournament organisers have confirmed some of the matches, including Djokovic vs Zverev on day two of the tournament.

Also in the Falcons vs Hawks clash is a match between Sabalenka and Rybakina before Dimitrov teams up with Badosa in the doubles to face the pair of Thiem and Kontaveit. Meanwhile another exciting men’s singles match between Nick Kyrgios and Felix Auger-Aliassime has been confirmed for day one of the tournament when the Eagles take on the Kites.

The Kites’ world No 1 Swiatek will face recent WTA Finals champion Carolina Garcia of team Eagles in the women’s singles match before Holger Rune and Sania Mirza pair up to represent the Kites against the Eagles’ Bianca Andreescu and Rohan Bopanna. Each team will then face each other over the course of the next three days of the tournament before the top two teams do battle in the final on December 24, meaning Zverev will also have to face the likes of Kyrgios while the Aussie will take on Djokovic in a Wimbledon final rematch.

When the new team tournament was first announced, Djokovic said: “This new event is exciting, there’s no doubt about it. I absolutely love playing in Dubai, I’ve had a lot of success there over the years and really enjoy the fans. This is something different, and it’s going to be great being a part of it.”