London: Alex de Minaur has exited Wimbledon in the fourth round, relinquishing a two-sets-to-love lead to fall to Cristian Garin in an epic clash that extended well past the four-hour mark.

It’s now up to either Nick Kyrgios or qualifer Jason Kubler to ensure an Australian man reaches the quarter-finals. 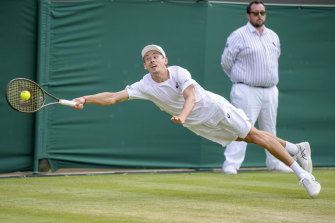 The Chilean ultimately stepped up at critical stages – in the third and five set breakers – to end de Minaur’s dream of a deep run.

World No.27 de Minaur was gunning for his second career major quarter-final after a final eight finish at the US Open in 2020.

But it was not to be against an opponent who should be commended for not throwing in the towel and finding a way to win after more than 4½ hours.

Should Kyrgios defeat the fellow unseeded Nakashima, Australia will have a men’s quarter-finalist in London for the first time since Kyrgios himself in 2014.

Kyrgios holds a two sets to one lead against the unseeded American.

Little-known Kubler is on court against American Taylor Fritz.

It’s 17 years since an Australian man last reached a major semi-final – at Wimbledon in 2005 when Lleyton Hewitt went deep in England three years after he was victorious at the championships.

In the women’s draw, Australian Ajla Tomljanovic is gunning for back-to-back quarter-finals, with a tough round of 16 assignment against Alize Cornet under way.

Watch all the action from Wimbledon ad-free, live and on demand on Stan Sport, with matches streaming in 4K UHD from June 27. Coverage of select matches commences on 9GEM from 7.30pm (AEST) each night.