Carlos Alcaraz beats Jannik Sinner in five-set thriller, with play not finishing on Arthur Ashe until 2.50am after FIVE-HOUR marathon clash… as Spanish teenage sensation sets up US Open semi-final showdown with Frances Tiafoe

This was a match that would not end. Should not end, one might say. Carlos Alcaraz and Jannik Sinner, two of the brightest young stars of men’s tennis, traded shots of the highest quality and countless momentum swings across five sterling sets for 5 hours, 15 minutes until Alcaraz finally won the last point at 2.50am on Thursday, the latest finish in US Open history.

‘Honestly,’ said Alcaraz, who saved a match point in the fourth set, ‘I still don’t know how I did it.’ 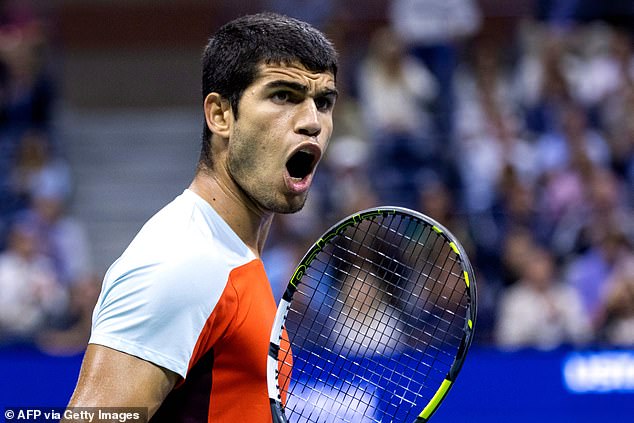 He reached his first Grand Slam semifinal and is the youngest man to get that far at the US Open since Pete Sampras won the title at 19 in 1990. Alcaraz, who has a chance to move up to No. 1 in the rankings next week, will face No 22 Frances Tiafoe of the United States on Friday.

This match began Wednesday evening at about 9.45pm and easily surpassed the previous mark for latest time of finish at the U.S. Open, which had been 2.26am, shared by three matches.

After his much more mundane, three-set victory over Andrey Rublev in a quarterfinal that ended at about 4.45 pm on Wednesday, Tiafoe was rather prescient when asked about Alcaraz and Sinner.

‘I just hope they play a marathon match, super-long match,’ Tiafoe said with a smile, ‘and they get really tired come Friday.’ 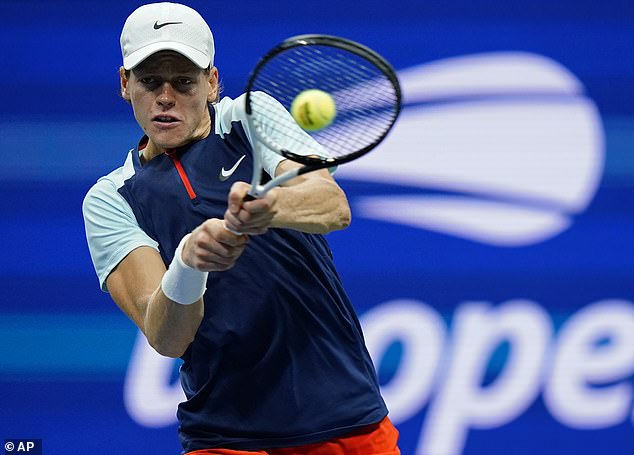 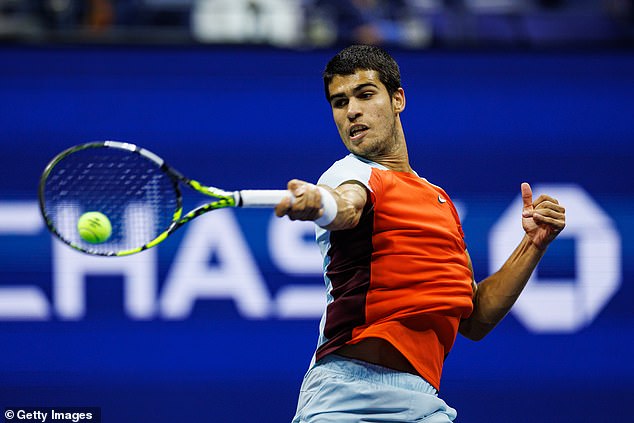 Alcaraz saved that match point and went on to win the fourth 7-5, before winning the fifth 6-3

The clock already was past 2am when Coco Gauff, the 18-year-old American who was the runner-up at the French Open and bowed out in the US Open quarter-finals on Tuesday, spoke for anyone paying attention to Alcaraz vs. Sinner when she tweeted: ‘this match is insane. I leave at 6am for the airport but I refuse to sleep and miss this.’

Still, even with thousands and thousands of empty seats, there were enough who remained on hand to make as much noise as a full house at times. Both players would wave their rackets or motion with their arms to encourage the fans to get even louder. And, naturally, the fans would oblige.

It was as back-and-forth as could be.

After taking the first set, Alcaraz held five set points in the second – but Sinner saved them all. 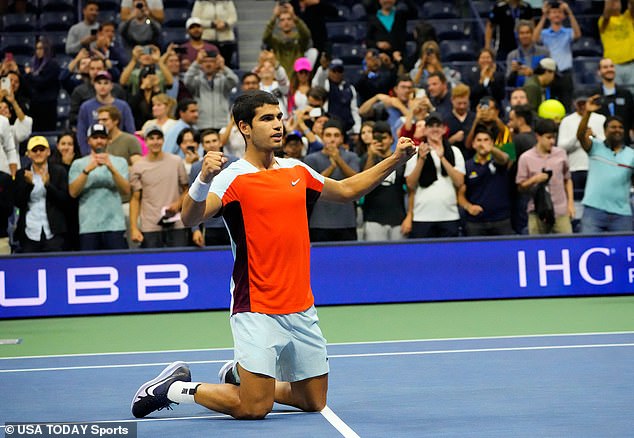 It was a remarkable encounter, which the Spaniard won after over five gruelling hours

In the third, Alcaraz broke to lead 6-5 and served for that set – but Sinner broke to force a tiebreaker that he dominated.

In the fourth, it was Sinner who served for the victory at 5-4, even holding a match point – but Alcaraz broke there and wound up pushing what already was a masterpiece to a fifth.

And in the fifth, Alcaraz pushed through, dropping to his back when it ended, his chest heaving, and covered his face with his hand.