The repeated ‘stay off the pitch’ announcements were well-intentioned, especially in light of the week’s events, but they were always going to be futile.

When the final whistle finally went, joyous York City fans streamed onto the pitch from all angles and mobbed their promotion winners.

There was some goading of the disappointed Boston United support in their section but when the visitors responded with magnanimous applause, a mutual respect broke out. 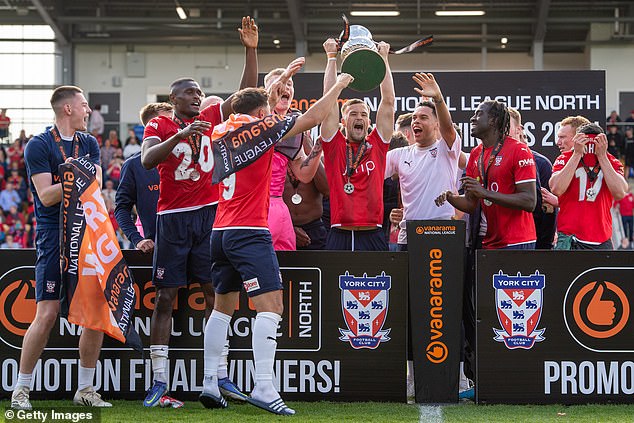 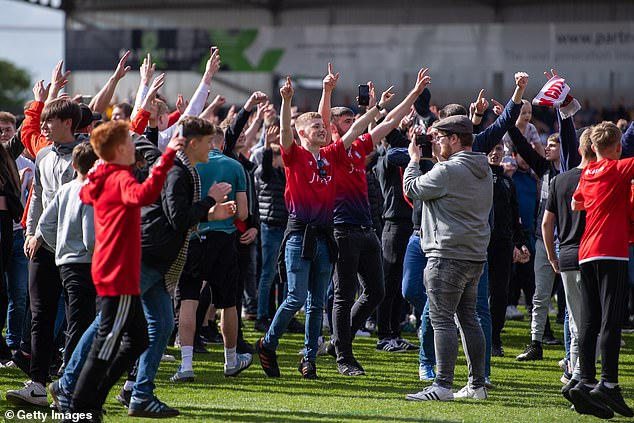 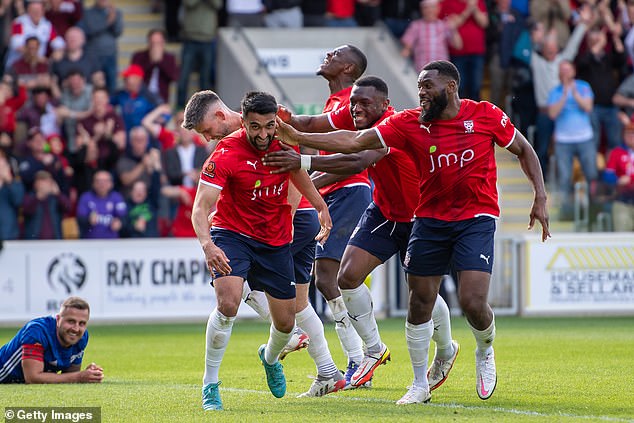 The Minstermen were on their way back to the National League after five agonising seasons in regional football. They’d bottomed out; now the only way was up.

That it happened in their centenary year and in the first season their smart new LNER Community Stadium was allowed to admit fans only made the moment all the more special.

‘I’m really pleased that a football club like this is back to somewhere it should be,’ said York manager John Askey. ‘Hopefully this is a new start.’

You could counter that no club has a divine right to be at any level but let’s consider the facts.

York played in the Football League uninterrupted from 1929 until 2004. Eight seasons in the Conference were followed by another four-season stint in League Two.

All reasonably-minded football followers would consider York a League club but the horrors of 2016 and 2017, when they suffered relegation from League Two and then dropped straight through the National League, left them in the depths of despair. 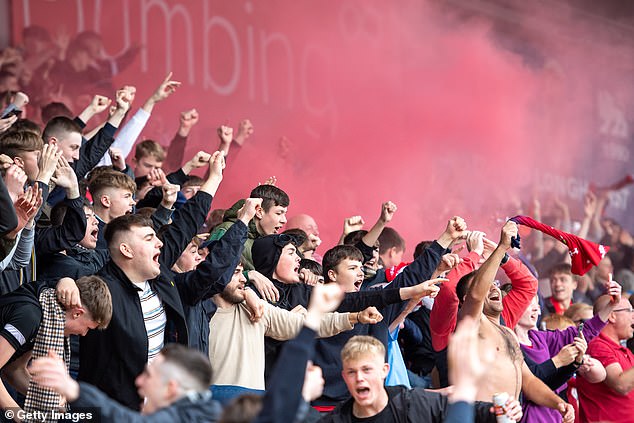 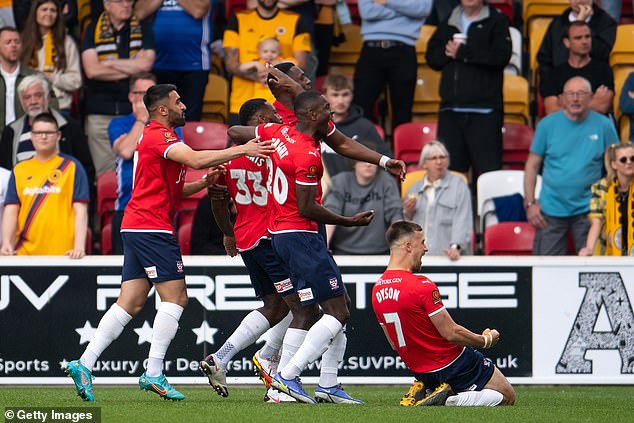 The sixth-tier National League North has become a graveyard for erstwhile League sides – some who went bust, reformed and climbed back up the pyramid, others who have simply sunk.

So it’s far from straightforward to get out of, as York discovered with mid-table finishes as they acclimatised to the lowest level of football they’d ever played in.

This season promised more of the same old frustration. A slow start to the campaign under Steve Watson saw Askey, who took Macclesfield back into the League in 2018, brought in as assistant manager.

With York some way off the play-off places, Watson was replaced by Askey, initially on an interim basis and then  as they gathered winning momentum through March, permanently. 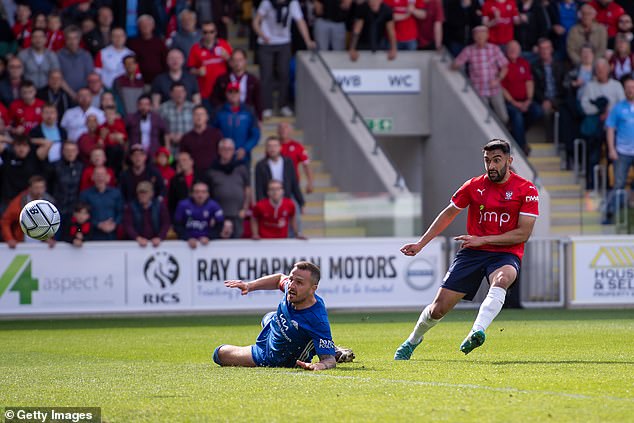 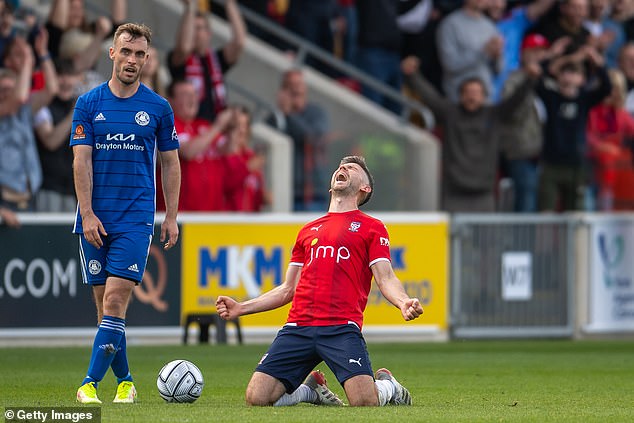 They ultimately finished fifth and play-off wins over Chorley and Brackley set up this special occasion, with the 7,500 tickets available selling out within hours.

It was an atmosphere of passion and colour, with both sets of fans inside the ground and singing an hour before kick-off.

Any York nerves were settled just five minutes in. Boston’s defence failed to deal with Scott Barrow’s long throw into the box and the ball fell to Lenell John-Lewis to sweep home.

John-Lewis, on loan from Grimsby, was a major fitness doubt after injuring his thigh scoring the winning goal at Brackley but the man understandably nicknamed ‘Shop’ was always going to make it.

‘In the second half, he was virtually playing on one leg,’ said Askey.

Boston’s main threat came from corners and long throws but York outdid them for physicality and restricted sights of goal.

Given Boston’s first shot on target came after the 80-minute mark, they could have few complaints at the outcome.

York also rattled the woodwork through Clayton Donaldson late in the first-half but they couldn’t kill the contest off.

Nerves crept around the stadium as the minutes ticked down and Boston pressed York further and further back. Home keeper Pete Jameson made an important stop to keep out a Shane Byrne free-kick.

But with four minutes remaining, veteran 38-year-old forward Donaldson put in a crunching tackle to set York on the counter and Maz Kouhyar – the first Afghan to play professionally in Britain – sparked pandemonium by scoring at the near post. 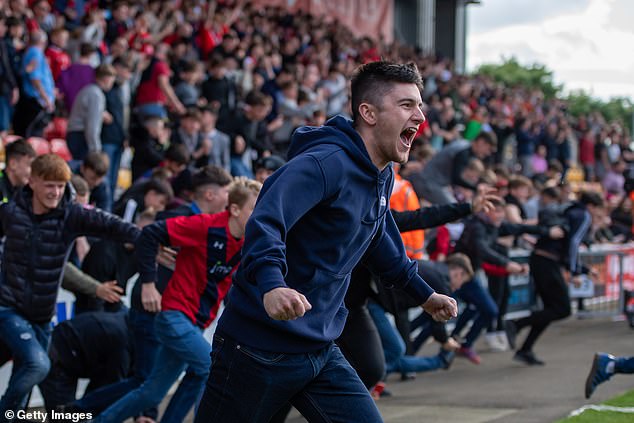 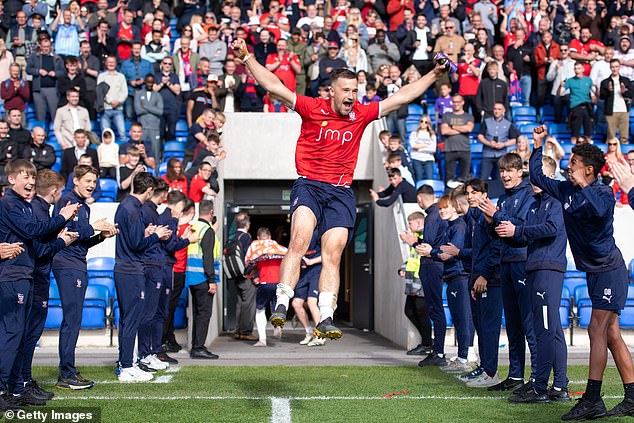 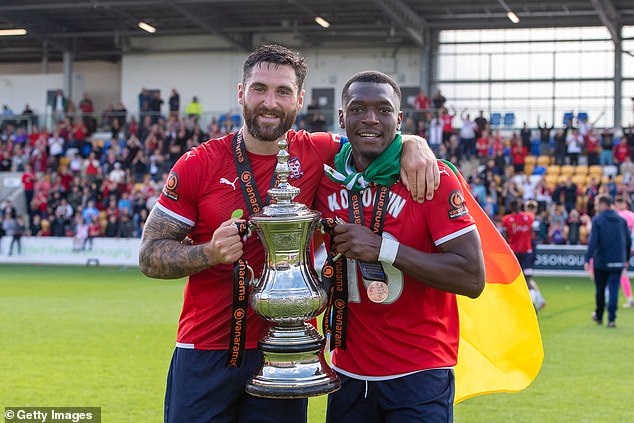 The lifting of the trophy felt cathartic for York, who can look forward to National League football again next season and no doubt will already be thinking how they can break back into the EFL.

‘I know how much it means to this football club,’ added Askey, who spoke to the media clutching a celebratory can of Budweiser.

‘Although I never had any links to the club before, I know how important it is to get to a level where we make the club feel proud again.

‘To do it in the centenary year and in the new ground, it couldn’t have been timed any better.’

Spare a thought for Boston, however, who have now suffered five play-off heartbreaks – two finals and three semi-finals – since they came into this division in 2010. 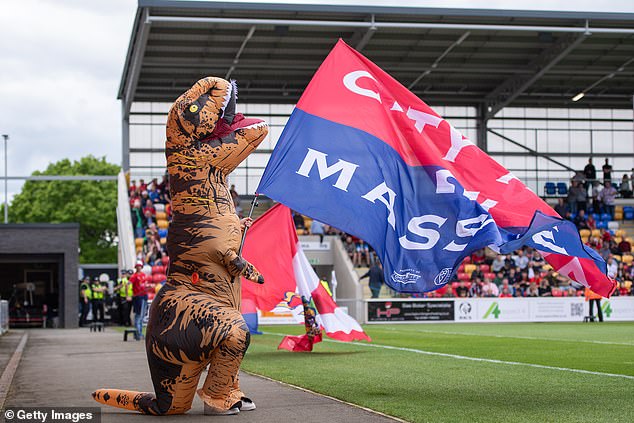 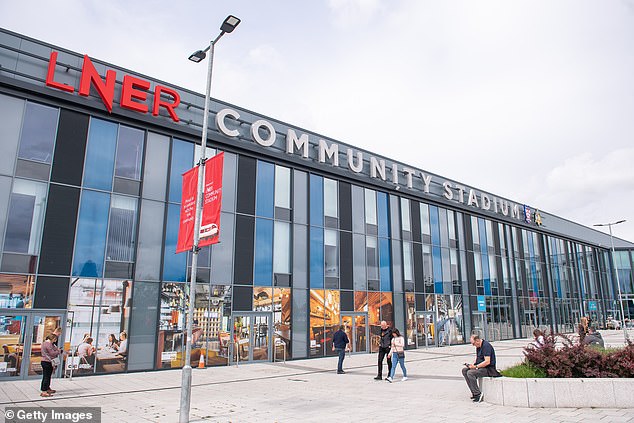 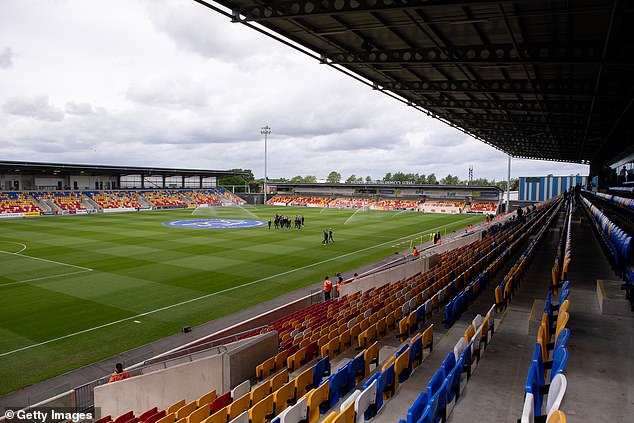 The 8,500-capacity all-seater stadium welcomed fans for the first time this season

They too welcomed fans to a new stadium back in August and swapped managers in mid-season.

Squeezing into the final play-off spot on the final day, their late season insurgency saw them beat the higher-placed Kidderminster and Fylde to get here.

They sold all 870 tickets given them by York and hundreds more watched on a big screen back at their own stadium.

This was one game too far but you can expect Paul Cox’s team to be among the promotion favourites next season.

‘I’ll never celebrate finishing second or losing,’ Cox said. ‘It’s a horrible place when you lose a game like this. I don’t want that again.’