Buy now or it’s bye-bye top four! West Ham MUST bolster their squad this month, despite back-to-back wins, to maintain their push for Europe – with David Moyes in need of a little help from the club’s money men

It was so nearly a marvellous comeback, with Selhurst Park’s Holmesdale Road Stand doing their best to suck Jean-Philippe Mateta’s stoppage-time scissor kick into the net and spark pandemonium.

In the end it wasn’t to be as Crystal Palace failed in their late charge to rescue a point. West Ham manager David Moyes admitted the result was better than the performance and he was right. His team didn’t play that well but took a 3-0 lead by half-time and then held on to win 3-2.

It lifted them to fifth in the Premier League and they’re looking up, not down. And this month we will find out just how serious West Ham are about cracking the top four. 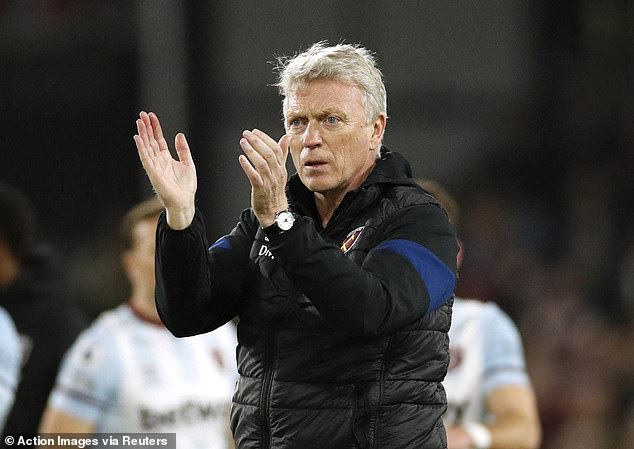 Co-owners David Sullivan and David Gold were at Selhurst Park on Saturday. They have a good track record in this window — Tomas Soucek, Jesse Lingard and Jarrod Bowen were all January arrivals — and a new addition or two this month could make all the difference.

Signing a defender is high on Moyes’s list of priorities. Issa Diop and Craig Dawson are trying to fill in for Angelo Ogbonna and Kurt Zouma but they can look like lambs to the slaughter. As can Arthur Masuaku, who isn’t the most trustworthy footballer to have guarding your goal while Aaron Cresswell continues to struggle after crashing into a post in his last appearance in November.

Up front, too, West Ham could do with adding someone who will guarantee goals. Manuel Lanzini’s ability to control the ball then volley brought the best goal of the game and he followed it with a penalty. Michail Antonio also scored, though if he goes through a dry spell the club’s charge for the Champions League could suffer, given their reliance on him. 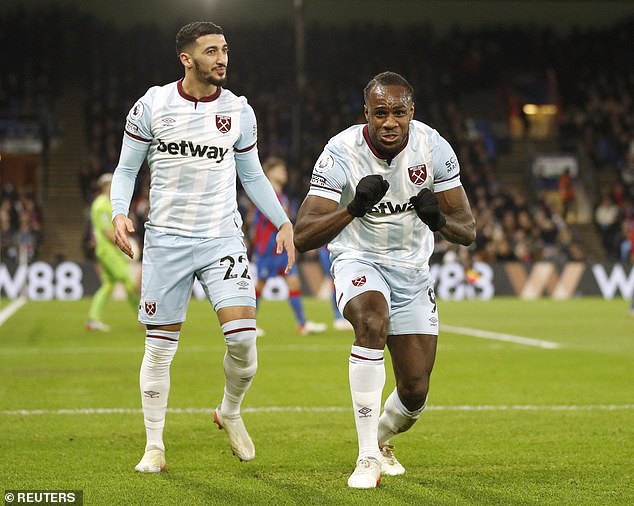 He’s in form with two goals in three games, after scoring only one in 11 before that. Asked what had changed, Antonio said: ‘I had Covid! That sparked me into life. I came back so maybe just having the break away from football to clear my mind. First game back was Southampton (goal), second game was Watford (assist) and then Crystal Palace (goal).’

Asked if he wants help up front or if he’s happy to keep flying solo as West Ham’s go-to striker, 31-year-old Antonio said: ‘I’m a person where I want a challenge. I want someone to be there pushing me.

‘The time I went nine games without scoring a goal, maybe someone could have stepped in and given me that push. I would embrace someone coming in. I’d embrace the competition.’

There’s a maturity about Antonio now which was lacking previously. It was Christmas Day 2019 when he crashed his Lamborghini into a front garden in south London while dressed as a snowman. He started for West Ham the following day, losing 2-1 at Palace. 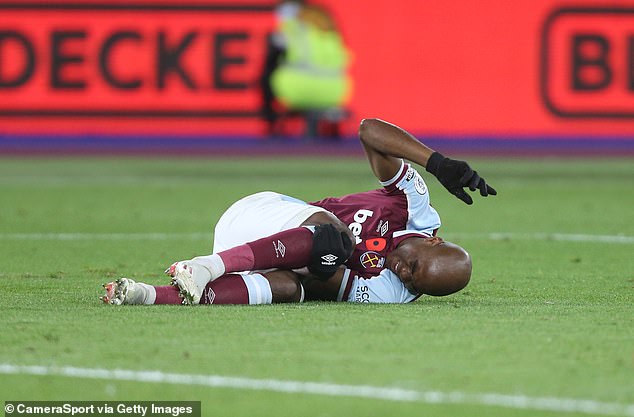 ‘Work rate,’ Antonio continued about West Ham’s impressive form. ‘He (Moyes) showed us stats when he came in that said our work rate wasn’t high enough. Our running stats were about 16th in the league. Now our running stats are fourth or fifth. We’ve got the quality but you have to match the work rate with it. That is what the top boys do.’

Cheekily asked if Moyes lets him wear his snowman get-up now that he’s grafting, Antonio answered: ‘I can dress up whenever I like!’

This wasn’t a happy return to the dugout for Patrick Vieira after his Covid-enforced absence. He was without Conor Gallagher and Wilfried Zaha and wouldn’t divulge whether they had tested positive or were isolating or injured. Likewise he wouldn’t confirm if Zaha would still be going to the Africa Cup of Nations with the Ivory Coast.

Palace still managed to make this match competitive with late goals from Odsonne Edouard and Michael Olise, who made an excellent impression as a 68th-minute substitute.

The scoreline was too close for Moyes’s liking. If they’re to beat Arsenal, Tottenham and Manchester United to fourth, the manager could do with a little help from the money men who were sitting in Selhurst Park’s VIP area.