The Australian Professional Leagues remains committed to completing the season on schedule despite being forced to postpone its 10th game this season, with Western Sydney Wanderers’ match against Western United on New Year’s Day no longer going ahead due to COVID-19 cases.

The looming postponement means the A-League is on the brink of having an entire round rubbed out. Five games have been postponed this weekend due to either COVID cases in teams or travel havoc caused by the Omicron outbreak in Australia.

League and club sources told The Herald and The Age the Wanderers match at CommBank Stadium on January 1 will not go ahead due to a spike in cases within both teams, the majority at the Victorian side.

Western Sydney were eager for the match to go ahead despite having a number of players unavailable, but the rise in positive cases at Western United will prevent them from taking part.

The Wanderers and the APL are set to announce the postponement of the match on Thursday afternoon. The match will be the second in a row involving Western Sydney to be scrapped within days of kick-off.

It leaves Adelaide’s match at home to Wellington as the only game of the round that can still proceed. However, even that has a cloud over it. The Phoenix have reported three positive cases in their squad, two of which were players, and are walking a tightrope before Saturday’s match against the Reds. 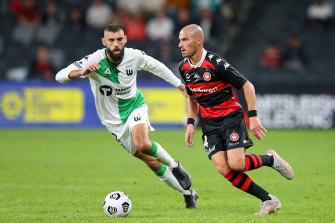 Western Sydney’s match against Western United will be postponed due to COVID.Credit:Getty

NSW recorded 12,226 new cases of the virus on Thursday and the state is grappling with a backlog of test results, the closure of several testing sites and lengthy delays for those seeking PCR tests.

The APL, owners of the A-Leagues, expects more postponements in January if cases soar, but sources said the organisation was confident the season won’t be put on hold or extended beyond its scheduled finish in late May.

APL chief Danny Townsend told the Herald and the Age this week the A-League will likely play through the next two international breaks in January and March to finish on schedule. A-League commissioner Greg O’Rourke floated the possibility of shortening the season to 22 rounds instead of 26.

“The other option we have is the current 26 games per team could be reduced down to 22 if needed without affecting the integrity of the competition,” he told the A-Leagues’ website, Keep Up. “That option has been in our top drawer for the last two years but we haven’t needed it to date.

“In terms of when we finish the men’s season – I’m pretty sure we can complete it by end-May, using the options above, but we haven’t taken the option of working with the FA about June off the table.”

Coverage returns on February 16 for the UEFA Champions League Round of 16.