Wales fans will face police action if they invade the pitch after Sunday’s World Cup play-off final against Ukraine.

Supporters have also been told not to bring pyrotechnics into the Cardiff City Stadium or they risk arrest and a minimum three-year football banning order.

The warning from the Football Association of Wales comes after a spate of disorder towards the end of the season.

Nottingham Forest fan Robert Briggs was jailed for 24 weeks after he attacked Sharp, which seemed to initiate other issues as more fans entered playing fields across the country.

Crystal Palace manager Patrick Viera was also involved in an altercation with a fan when his side lost to Everton at Goodison Park. 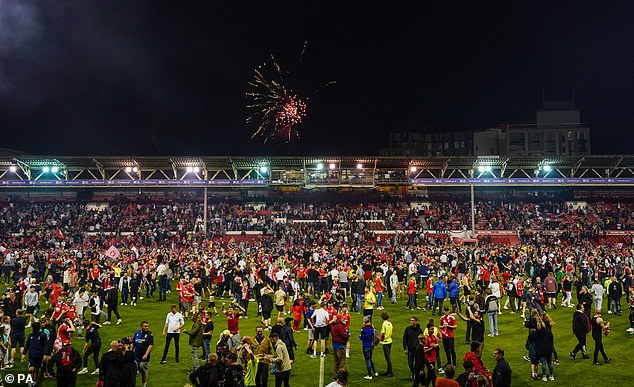 Police investigations are also ongoing in relation to player assaults at the Northampton v Mansfield and Port Vale v Swindon matches, while a 16-year-old boy admitted assaulting a Scunthorpe player during a pitch invasion at Bristol Rovers at the end of the League Two regular season on May 7.

‘Cymru fans are award-winning and respected across Europe but depending on the situation at the conclusion of the FIFA World Cup play-off final; all spectators are politely requested to keep off the pitch,’ the FAW said in a statement.

‘Anyone entering the field of play will be subject to criminal proceedings.

‘It is also vitally important that the condition of the playing surface is protected for the two UEFA Nations League matches being played at Cardiff City Stadium on June 8 and June 11.’

The FAW have also said the use of pyrotechnics will not be tolerated after flares were widely seen at grounds at the end of the domestic season.

‘There is no safe use of pyrotechnics in spectator areas at football events with their use having many health risks and dangers such as loss of sight, limb or digit removal due to their explosive power,’ the statement added. 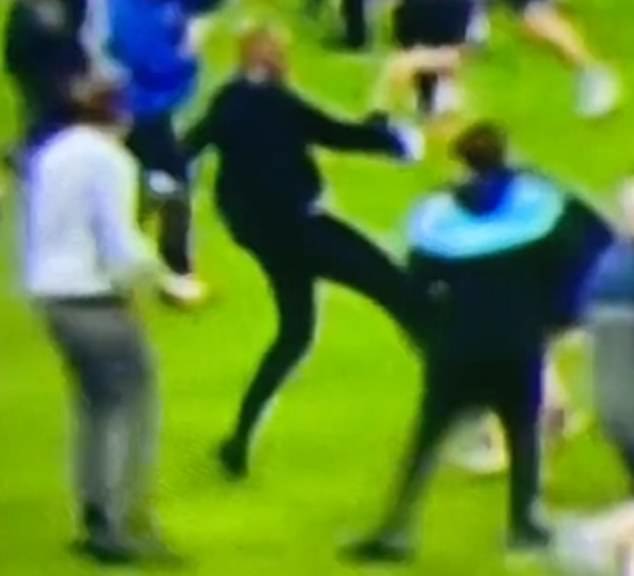 Pitch invasions have also caused issues in the Premier League, with Patrick Vieira kicking out at a fan recently 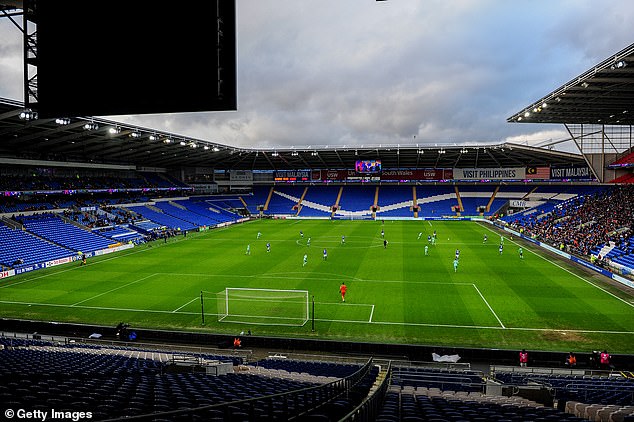 ‘Being in possession of a pyrotechnic device at a football match or attempting to bring such a device into a football stadium, is a criminal offence under the Sporting Events Act 1985.

‘Any person committing such an offence faces an FA Wales ban, probable arrest and a minimum three-year football banning order.

‘Fans are advised not to travel to the Cardiff City Stadium without a ticket and there will be no fan activity outside the stadium.

‘There is no public screening or fan zone showing the match within the city centre and fans without tickets are advised to avoid travelling due to several other events taking place on Sunday, 5 June.’

Earlier this week, supporters of EFL clubs were warned tougher sanctions for pitch invasions are on the way after a spate of disorder towards the end of the season.

EFL chief executive Trevor Birch said that although most people came onto the pitch for celebratory reasons, they were “providing cover for a reckless few seeking to cause harm” and warned pitch invasions simply had to stop.