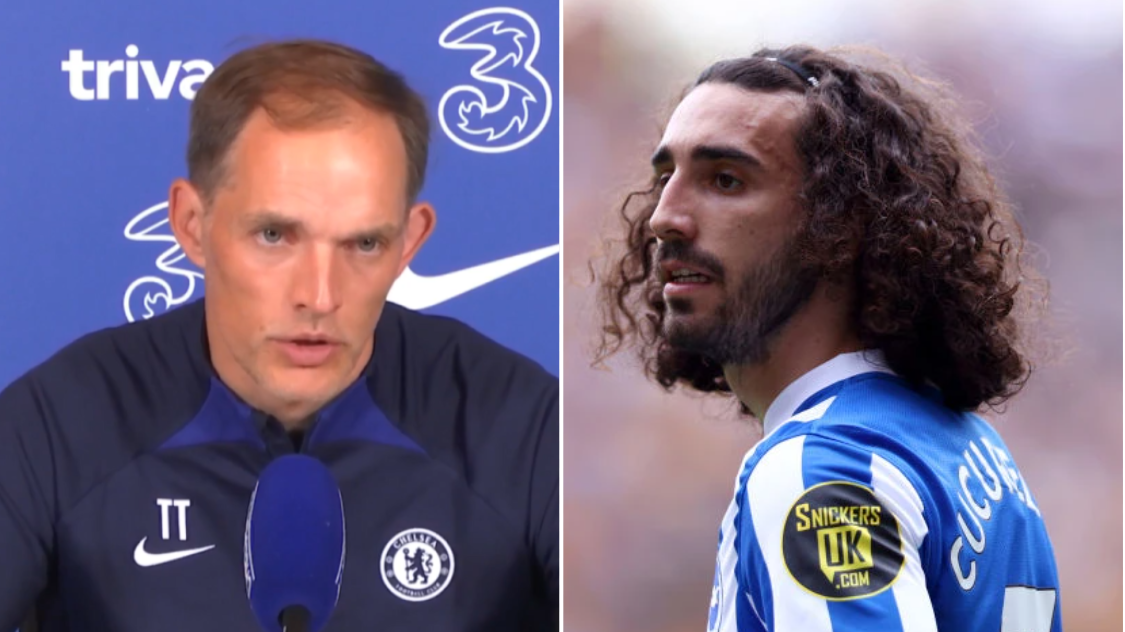 Thomas Tuchel has confirmed that Chelsea are on the verge of completing a deal for Brighton defender Marc Cucurella and is hoping to register him in time to play this weekend.

The Blues have finally agreed a fee worth as much as £63million – with £56m being paid up front – and the Spaniard has already completed a medical, with the final paperwork needing to be signed off before midday in order for him to be involved on Saturday against Everton.

Although usually guarded when talking about transfers, Tuchel says the deal is virtually done – with Levi Colwill going the other way on loan – and is keen for him to be part of the squad this weekend.

Speaking at his pre-match press conference on Friday, the German coach explained: ‘Well it’s not done yet, but I don’t want to tell you that I don’t know anything about it of course.

‘The paperwork is in process and hopefully we can get it finished before noon and that Marc is our player.

‘Marc is a fantastic player, a young player, he’s hungry, mobile and very intelligent. He can play in several positions in our system and that’s why we hope the transfer goes through.

‘And then if it goes through it opens up some options, like for Levi Colwill to maybe find some more game time elsewhere.’

Speaking about the highly-rated Colwill’s looming exit, Tuchel explained: ‘It’s a bit hard to judge him, he came back, there was not a lot of game time in pre-season to give to him because of a little injury he caught in training.

‘So the situation is the situation, for the moment it is very individual always. If there is a possibility for him to have a good loan or a situation where he can develop and improve, then we are open for any talks and any solutions.’

Cucurella is expected to provide cover and competition for Ben Chilwell at left wing-back, though the former Getafe man also played on the left side of a back three at the backend of Brighton’s campaign last season.

That is a position Tuchel also envisages using Cucurella in, likening the defender to versatile compatriot – and Chelsea captain – Cesar Azpilicueta.

He added: ‘Hopefully when things go through, Marc is the option [at left wing-back] but I think he can play very well in the back three. So he’s a bit like the profile of Azpilicueta, but with a left foot, and he gives us many options.’

Chelsea are still believed to be interested in bringing in another defender before the window closes and have been pursuing Leicester City’s Wesley Fofana.