There are now under two weeks left of the summer transfer window and we could be about to enter the most frenetic and unpredictable period of the market as we build up towards deadline day. Premier League clubs have already splashed out hundreds of millions of pounds on new signings – but expect that figure to grow in the coming days.

Manchester United fans were finally given something to cheer as they reached an agreement for Real Madrid midfielder Casemiro earlier this week. But they still want much more, and links to Ajax winger Antony, PSV Eindhoven star Conor Gakpo and Brighton talent Moises Caicedo continue to grow.

Meanwhile, Chelsea also still want at least one or two new faces, and talk linking them with Leicester’s Wesley Fofana and Harry Maguire of United will not go away. Do not be surprised to see movement in the coming hours.

And with Liverpool, Tottenham, Arsenal, Newcastle and Leeds among others still eyeing additions to their squads, strap yourselves in because this summer transfer window is far from over yet. 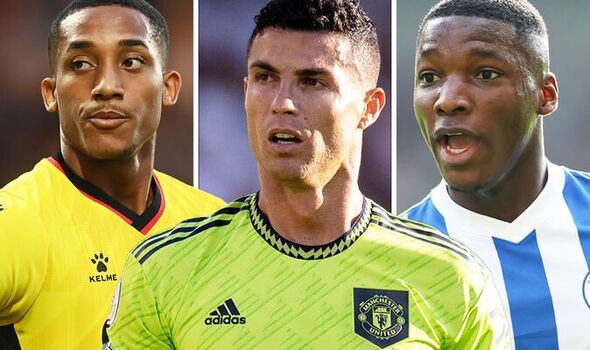 Newcastle are in talks with Watford over a statement double deal for Joao Pedro and Ismaila Sarr, reports claim. Eddie Howe has emphasised the club’s desire to bring in quality over quantity and now two Premier League-proven forwards are very much on his radar.

According to transfer expert Fabrizio Romano, Newcastle are now in discussions with Watford over the signing of jet-heeled winger Sarr in addition to Pedro.

Manchester United have launched a £72.3million bid for Antony, according to reports, while they’re also prepared to stump up £35m for Cody Gakpo.

The Glazers know Erik ten Hag needs more backing if he’s to turn the club around, particularly given their turbulent start to the new season.

And it seems like the controversial Americans are ready to bankroll deals for two of world football’s brightest prospects.

According to The Mirror, United have bid £72.3m for Antony. And though their offer has been turned down, they remain determined when it comes to bringing the Brazil international to Old Trafford.

And it’s claimed they’re also looking to land Gakpo, too, with the PSV Eindhoven star valued at around £35m.