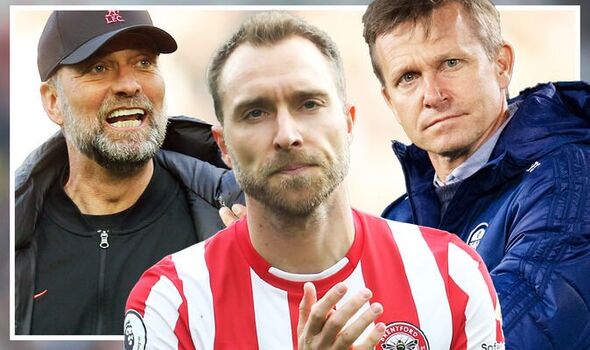 Less than a week into the summer transfer window and some of the Premier League’s biggest sides have already blockbuster deals, while others are working on statement signings of their own. The likes of Liverpool, Manchester United and Leeds United remain hard at work, in the knowledge that getting business done early can often save cold, hard cash.

Liverpool stole the show yesterday by announcing the arrival of Darwin Nunez for an initial £64million. If add-ons are triggered, he will become their record signing, and with Sadio Mane expected to make way over the coming weeks, the Uruguayan will be under pressure to produce instant results.

Man Utd’s window is yet to run so smoothly, with Barcelona still playing hardball over the services of Frenkie de Jong. The Dutchman remains a priority target for Erik ten Hag, but the Red Devils have also submitted a proposal for fellow midfielder Christian Eriksen, who is available on a free transfer.

Leeds, meanwhile, have been mightily busy. Jesse Marsch has already welcomed two new faces, and while a deal has reportedly been agreed for a third, the Whites hierarchy are already getting to work on a fourth signature.

Keep up to date with the day’s latest transfer news and gossip, as it happens, below…

Manchester United target Frenkie de Jong has once again suggested that he would prefer to stay at Barcelona this summer.

It was thought that Erik ten Hag had convinced the Dutch star to make the switch to Old Trafford and help out his current club in the process by banking them some much-needed cash.

But when asked for an update while on international duty, De Jong responded: “You’re always flattered when teams show interest in you as a player. But I think I’m at the biggest club in the world at the moment. I feel fine there, so no news.”

Leeds transfer chief Victor Orta has already signalled the club’s intent this summer by splashing £35million on Brenden Aaronson and Rasmus Kristensen. And another £12m could be on the way out of the Whites’ bank account as a deal has reportedly been agreed for Bayern Munich midfielder Marc Roca.

With three seemingly in the bag, Orta is set to turn his attention towards a new striker to provide cover and competition for Patrick Bamford, who spent the majority of last season out injured.

Liverpool boss Jurgen Klopp is aiming to follow up the signing of Darwin Nunez with another promising youngster. Aberdeen’s Calvin Ramsay has been on the club’s radar for some time, but the Scottish side are understandably holding out for the highest possible price-tag.

The £10million requested, which would be paid partly up front and partly in add-ons, has proven enough to make the Reds stop and think. The 18-year-old made his senior breakthrough last campaign and notched four assists, and has reportedly agreed personal terms on a move to Anfield already.

It remains to be seen whether Liverpool cough up the cash that would obliterate Aberdeen’s record for a player sale.

The Red Devils’ move for Frenkie de Jong certainly comes with its pros and cons. On the one hand, he is a tremendous player with plenty of years left at the top level, but Barca are set to make United pay a premium which could leave Ten Hag with little left to spend.

On Tuesday, The Athletic announced that a proposal had been submitted to bring Christian Eriksen to Old Trafford. The 30-year-old Dane impressed at Brentford last season, and with his short-term contract due to expire, Ten Hag could land the silky midfield maestro for absolutely nothing.

Tottenham are also believed to be among the interested clubs, and Eriksen himself has stated a desire to play Champions League football.