Manchester United, Arsenal and Chelsea are all looking to get more deals over the line as Premier League clubs continue to do business. The new season begins in less than three weeks and teams are urgently making signings to strengthen their squads before the opening day.

United are imminently set to add Lisandro Martinez to their squad and continue to push for the acquisition of Frenkie de Jong. Barcelona want to sell the player but a deal has still yet to get done despite Erik ten Hag’s desire to get him through the door.

Chelsea have signed Raheem Sterling and Kalidou Koulibaly in the last seven days but want more new players, with Thomas Tuchel potentially set to sign two more central defenders. Manchester City’s Nathan Ake will not be one of them, however.

Arsenal are meanwhile set to bring in Oleksandr Zinchenko from City. The Premier League champions are trying to bring in Marc Cucurella from Brighton as the Ukrainian’s successor, with Zinchenko heading to the Gunners for around £30million. 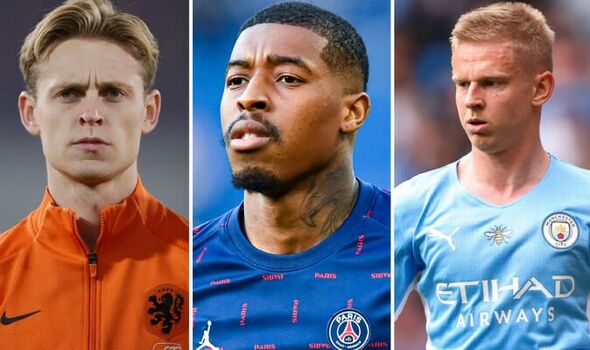 Aston Villa have set a £20million price tag on Carney Chukwuemeka, who has been linked with a whole host of clubs including Barcelona.

Fabrizio Romano says Barca lead the chase for the highly-rated academy midfielder, who is out of contract at Villa Park in 2023.

If no other club signs him this summer, the Catalan giants could wait until January and land the player for a minimal training compensation fee.

The Barcelona midfielder is reluctant to leave the Nou Camp even though his current club want to sell him to raise cash. A fee of around £72million is already agreed between the two clubs.

But per the Daily Mirror, Ten Hag is apparently keen for the United board to continue pushing to get the deal over the line. De Jong is central to the Dutchman’s summer plans and thinks he can help bridge the gap to Manchester City and Liverpool.

Manchester United are poised to confirm Lisandro Martinez as their latest signing but an announcement may not take place until early next week.

That’s according to the Manchester Evening News. The Ajax defender is in Manchester for his medical and will complete a £46million switch to Old Trafford.

Martinez will sign a five-year contract on wages of £120,000 a week and follows Tyrell Malacia and Christian Eriksen in joining Erik ten Hag’s side.

Chelsea are ‘very close’ to signing Presnel Kimpembe as their third addition of the summer, claims Portuguese outlet O Jogo.

Good morning and happy Sunday! It may be the weekend but we’ve still got plenty to update you on from the transfer market.

The rumour mill is very much still in overdrive with just 46 days until the window is closed. We’ll keep you updated throughout the day.