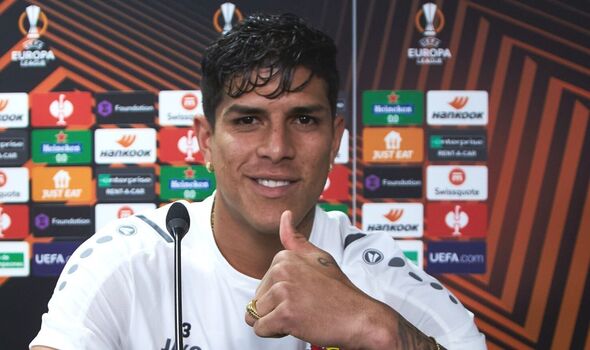 Tottenham look set to lay the groundwork for the summer capture of Bayer Leverkusen centre-back Piero Hincapie in a bid to fend off fellow transfer rivals. Express Sport reported back in November at the start of the World Cup that Spurs hold an interest in signing the Ecuador international, who is understood to have caught the eye of managing director of football Fabio Paratici.

While Ecuador were eliminated during the group stages in Qatar following an agonising showdown defeat to Senegal, Hincapie was one of his nation’s standout performers alongside Enner Valencia and Brighton midfielder Moises Caicedo.

There is now growing interest in his services with Spurs, Napoli and Atletico Madrid all thought to be monitoring his development.

Chelsea have also been keeping tabs on his progression but they’re now unlikely to move for Hincapie having signed left-footed central defender Benoit Badiashile from Monaco for £32.7million.

A left-sided central defender remains a key priority for Tottenham in the summer transfer window, when they are expected to let Clement Lenglet return to Barcelona.

While no final decision has been made as of yet on Lenglet, it seems increasingly likely that Tottenham instead will pursue other avenues in the summer window.

Their interest in Hincapie is concrete following promising initial conversations with his representatives in recent months.

Now Fabrizio Romano has revealed on the Here We Go Podcast that Spurs will be looking to set up a summer transfer with further talks scheduled in the coming months.

The idea is to gain an advantage over fellow suitors by selling the Tottenham project to the player and his agents to bolster the chances of a deal being struck further down the line.

Tottenham would still love to sign Josko Gvardiol from RB Leipzig but a deal is now seemingly out of reach following his exceptional World Cup campaign with Croatia.

Spurs tried to land Gvardiol last summer but were priced out of a move before Chelsea saw a proposal in the region of £77million waved away.

Gvardiol could now stay at Leipzig beyond the summer but with the likes of Barcelona, Real Madrid and Manchester City also showing interest, there’s an acceptance that a deal is not financially viable for Spurs.

The Italian centre-back was one of Conte’s top targets before the start of the 2022/23 season but Inter Milan were not prepared to sell.

Bastoni also squashed all hope of a move to north London when he outlined his intention to remain with Inter for at least another season.

That’s why Tottenham have now started to look at other targets with Hincapie firmly admired ahead of a potential summer swoop.

He is currently valued at around £34m but given he is tied down to a long-term contract, negotiations are unlikely to prove straightforward.

Bayer Leverkusen director of sport Simon Rolfes said last summer: “With him, the situation is relatively simple. I know that many clubs are interested in him. He has a long-term contract here.”