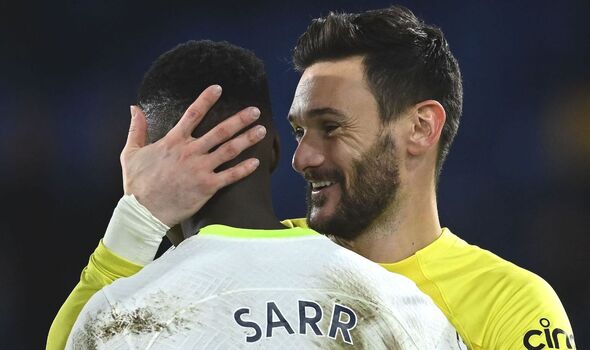 There were few precious victories during the depressingly short-lived Nuno Espirito Santo era at Tottenham but the £14.6million capture of Metz’s exciting midfield prospect Pape Matar Sarr could just prove to be a game-changer for Antonio Conte this January. The fiery Italian tactician is currently weathering a swirling storm laced with fan fury at Spurs that threatens to have damaging implications for the club’s future with Conte still yet to commit to a new contract in north London after 13 months of service.

The former Chelsea and Inter Milan head coach is desperate for some much-needed investment this winter but having now publicly conceded that he may have to settle for mediocrity – as opposed to titles and trophies – in order to remain at Spurs, the 53-year-old has finally become engrossed in some of Tottenham’s most-promising young talents.

All three – plus 21-year-old midfielder Harvey White – were involved in the emphatic 4-0 victory on the road at Crystal Palace on Wednesday and now Conte has confirmed he intends to keep both of Fabio Paratici’s 2021 signings this month – as opposed to sending them out on loan.

“We exploited the period of the World Cup to work with these young players to improve themselves under the tactical aspect and physical aspect,” he said after his side ran riot at Selhurst Park.

Conte is said to have been particularly impressed and enchanted by Sarr’s recent improvements and the dynamic box-to-box midfielder’s ability to absorb information and make changes to his game.

The 20-year-old maestro even took it upon himself to return to Tottenham training early following his involvement with Senegal at the World Cup in Qatar to maximise his chances of learning from Conte and his coaching staff during the mid-season break.

The promising results are clear for all to see following back-to-back substitute cameos in the 2-0 home defeat to Aston Villa and comfortable thrashing of Palace. Yet this was more than just two simple, milestone run outs for Sarr, who took it upon himself to stamp his authority on both matches.

Despite playing just 11 minutes plus stoppage time, Sarr received a 6.67 rating from WhoScored against Villa and was therefore the highest-rated Tottenham player in the frustrating 2-0 humbling on home soil.

He was here, there and everywhere during his Premier League debut, putting out several fires deep into Spurs’ half as Unai Emery’s spirited side looked to kill off the game with a humiliating third goal after second-half strikes from Emi Buendia and Douglas Luiz.

Yves Bissouma has simply failed to deliver since arriving at Tottenham from Brighton for £25million in June and Sarr’s eye-catching outing against Villa suggests the Mali international will have to up his game in order to keep his place in the side in the absence of Rodrigo Bentancur.

Sarr did everything Bissouma is renowned for with great technical quality. He had the self-confidence to help Spurs beat the opposition press and drive up the field. He also displayed assured passing with both feet while making his presence count on both sides of the pitch.

He was at the heart of the action once again against Palace; recovering the ball twice, completing 20 of his 21 attempted passes and winning three of his four duels. Sarr is a physical and technical phenomenon, who is already showing signs of fulfilling his potential at Tottenham despite limited opportunities. That is soon likely to change.

Not since the days of Spurs great Mousa Dembele have they possessed a midfielder willing to receive the ball from the defence on the half-turn before distributing it forwards. The Senegalese diamond in the rough wasn’t just passing the ball from side to side either. He was punching low passes between the lines to the attackers as Tottenham went in search of more goals.

After the bright Villa showing, Sarr could count himself unlucky not to start against Palace but he is unlikely to be denied on Saturday when Spurs host Portsmouth in the FA Cup third round. This is the perfect opportunity for Conte to let the 20-year-old talent off the leash, providing him with a platform to truly showcase what he can do ahead of the second half of the season.

Sarr, who is now going nowhere despite reported interest from both AC Milan and Sevilla, is beginning to acclimatise and adapt to the Premier League after just two seasons at senior level in France with Metz, one of which (2021/22) was spent on loan.

He is a monstrous prospect that could really breathe new life into Spurs’ topsy-turvy campaign in a major win for Paratici and Tottenham chairman Daniel Levy, who will now be licking his lips at the idea of saving millions in the transfer market despite calls for further investment.

Tottenham have a potential Rolls Royce on their hands and if his talent is nurtured correctly, he could have a huge part to play for Spurs moving forward in years to come – whether that be under the tutelage of Conte or an alternative boss in the dugout.