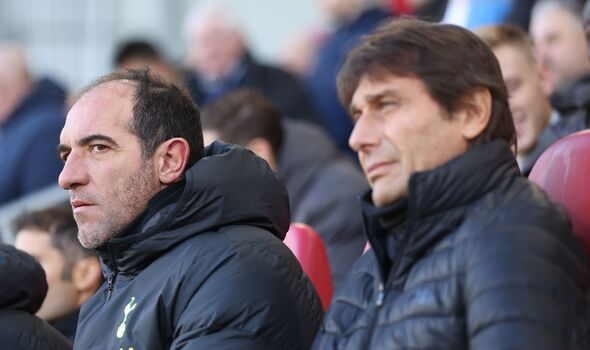 Antonio Conte’s assistant manager Cristian Stellini has revealed they can envisage staying at Tottenham for “a long time” as the Italian tactician continues to stall on a new contract. Serial winner Conte is yet to sign on the dotted line but his right-hand man has now provided optimism they are in it for the long haul in north London, hinting new deals are a formality.

Conte has been forced to battle the frustration of poor results and a lack of funds since arriving at the club.

While Tottenham spent respectably last summer, they have found themselves combating the same old problems after new signings failed to step up to the mark.

Now funds look dry once again this winter and Conte has ruled that he may have to accept for mediocrity as opposed to trophies if he opts to remain at Tottenham.

However, in an unexpected boost, Stellini dropped a major hint that Conte and his coaching staff are in fact prepared to extend their stays with Tottenham beyond this season.

When asked about the prospect of still being at the club next season, Stellini said: “Every time we have confidence on this. It’s not about the contract. It’s about the project, it’s about the future, and we are confident every time.

“Fifteen months is not a big period. We are in the way we expect after 15 months. For that reason we are in confidence.

“We are in the right moment after 15 months, if we compare our period to other periods in the past. We are in a good moment. We have to work. Like Antonio has said many times, we need passion and heart in the work. It’s not the time of the contract that decides. Your behaviour is the work you do to decide the result.

“We are confident to stay here a long time because we are working hard and the players follow us.”

Stellini appeared to be reaffirming that Conte and his team are totally committed to not only delivering this season but also building for the future.

Tottenham are currently occupying fifth place in the Premier League table following a recent slump that saw them take just one point from festive clashes with Brentford and Aston Villa.

Spurs responded well to the wobble though, bouncing back with an emphatic 4-0 thrashing of Crystal Palace in midweek.

Conte’s future is not the only contract situation that is causing concern at Tottenham though.

Harry Kane’s deal is up in the summer of 2024 and so far, there have been no promising signs that Spurs will be able to tie him down to fresh terms.

Bayern Munich are rumoured to be interested but Kane is believed to favour staying in the Premier League as he targets Alan Shearer’s record.

Finishing in the top-four will be crucial to Spurs’ hopes of keeping Kane with Manchester United currently looking for a striker after offloading Cristiano Ronaldo.

There is extra pressure on Spurs to deliver in this season’s FA Cup following their embarrassing League Cup exit at the hands of Nottingham Forest. Portsmouth visit north London in third-round action on Saturday.