‘The same terrible line up against Vitesse’: Tottenham fans left unhappy as Antonio Conte opts to keep Ben Davies and Eric Dier in the XI for his first Premier League encounter against Everton

A number of Tottenham fans have been left unhappy by Antonio Conte’s team selection for his first Premier League outing in charge of the north London club.

Conte, who replaced Nuno Espirito Santo as manager earlier in the week, takes his new side to Goodison Park on Sunday afternoon for a tricky encounter against an Everton side in need of a positive result.

The Italian has named an unchanged starting XI to the side that narrowly overcame Vitesse in the Europa Conference League on Thursday, with the north London club battling to a 3-2 win. 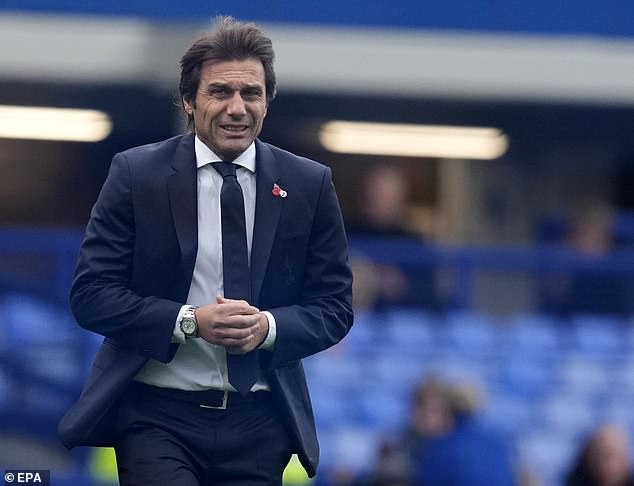 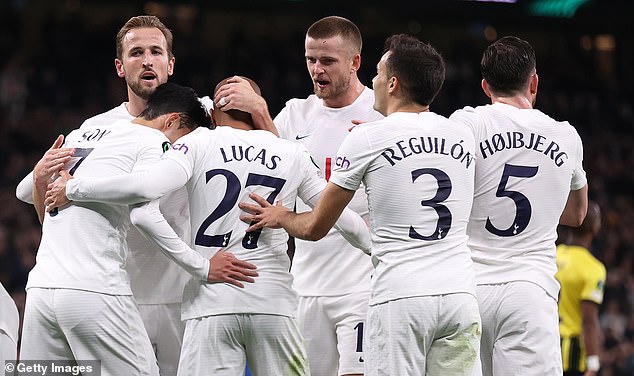 Despite Conte’s immediate switch to his customary back three, and despite going 3-0 up early on after a frantic start, Tottenham’s defence looked typically leaky as the visitors put the pressure on.

New signing Christian Romero, who has generally adapted well to English football thus far, was sent off for two yellow cards, while Eric Dier was beaten to the header from a corner as Jacob Rasmussen pulled one back.

Ben Davies, who was a surprise inclusion in Conte’s side – though not a total shock given his experience playing in a back three for Wales – also received criticism from the fans.

Tottenham are expecting a fast start under the guidance of their new prolific coach, and though many insist in Conte they trust, his first Premier League selection has had some fans scratching their heads.

Reacting to the news of Conte’s first Premier League selection, one fan wrote: ‘Did he (Conte) not see what we saw on Thursday night… Dier and Davies.’

Another wrote: ‘(Japhet) Tanganga and Davinson (Sanchez) on the bench as well but we start Dier and Benjamin Davies.’

Another disconcerted fan wrote: ‘The same terrible lineup (as) against Vitesse.’

Another prevalent concern for Tottenham fans throughout the campaign, particularly under Nuno, is the lack of creativity in midfield, a problem Conte certainly didn’t experience during his first game in charge.

However, one issue noted by a number of fans throughout the contest was the combination of Oliver Skipp and Pierre-Emile Hojbjerg, with many suggesting it’s a pairing simply too limited on the ball, while both players are of similar style and stature.

Tanguy Ndombele worked his way into the side under Nuno after being overlooked initially and impressed after coming on as a substitute on Thursday.

However, the French enigma has remained on the bench once more, alongside Dele Alli and Giovani Lo Celso, with the Tottenham fans again concerned.

One fan wrote: ‘Not the team I expected or was hoping for. No need to play five at the back, and Davies has no place at centre back. We have actually three better centre backs on the bench. Tanganga, Sanchez and (Joe) Rodon. Also, Skipp and Hojbjerg too defensive. This will again be a difficult game.’

A number of Spurs fans are also concerned by Oliver Skipp and Pierre-Emile Hojbjerg’s partnership in midfield. 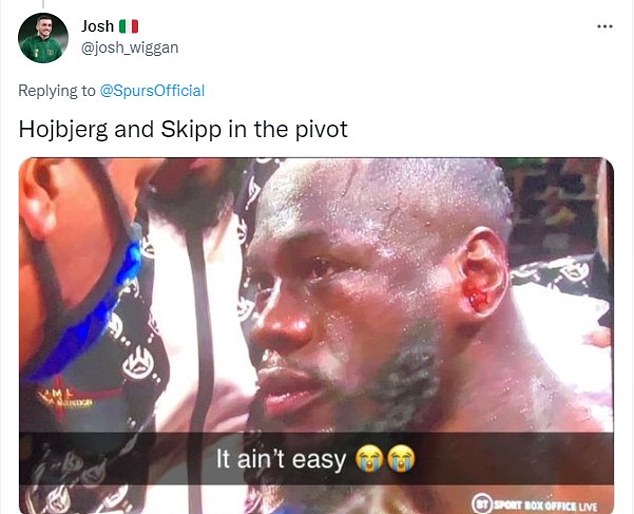