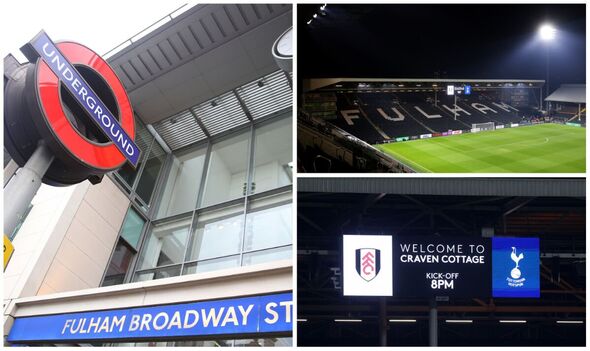 The Premier League clash between Fulham and Tottenham has been delayed after fans were hit by travel chaos in west London hours before the game. Both clubs announced that the game, scheduled for an 8pm kick-off, would be pushed back by 15 minutes as a power failure affected the London Underground District and Circle line services.

Both lines were suspended as fans were left stranded in parts of London after a power failure affected thousands of people travelling to the game by public transport. The Hammersmith and City line and the Elizabeth line were also suspended due to a suspected signal failure.

Fulham’s Craven Cottage stadium is situated around a mile away from the nearest tube station, Putney Bridge, which is on the District Line.

Some fans vowed to walk from parts of central London to make the game in time, with kick-off pushed back to 8.15pm to allow supporters enough time to make their way to the venue. However, the power outage may have caused chaos for Tottenham fans, who would have faced a long journey if travelling from near the club’s stadium in N17.

Tottenham announced to supporters that kick-off would be delayed with a brief statement released via their official Twitter account. Fulham also gave out the same information, blaming the delay on “travel restrictions” in the area.

Spurs’ statement read: “Kick-off in tonight’s @premierleague fixture at Fulham has been delayed until 8.15pm due to transport issues.”

The club had earlier warned supporters to check alternative routes with delays expected, listing ways fans ways could get to the stadium on their website.

Despite the delays in the surrounding areas causing havoc for supporters on their way to the game, it did not appear to affect the Tottenham team bus as it arrived promptly before kick-off.

The likes of Son Heung-min, Eric Dier and staff members were seen walking off the bus into the ground having made it through the traffic.

Fans were waiting for the team to arrive with their smartphones waiting to take pictures, suggesting that not everyone had difficulty on their travels.

Tottenham go into the clash knowing that victory is essential for Antonio Conte’s side after a poor run of form, with Spurs six points off the top-four going into Monday’s night clash.

And if the visitors lose again, they will be overtaken by their London rivals Fulham, who have exceeded expectations so far this season and currently sit in seventh place.