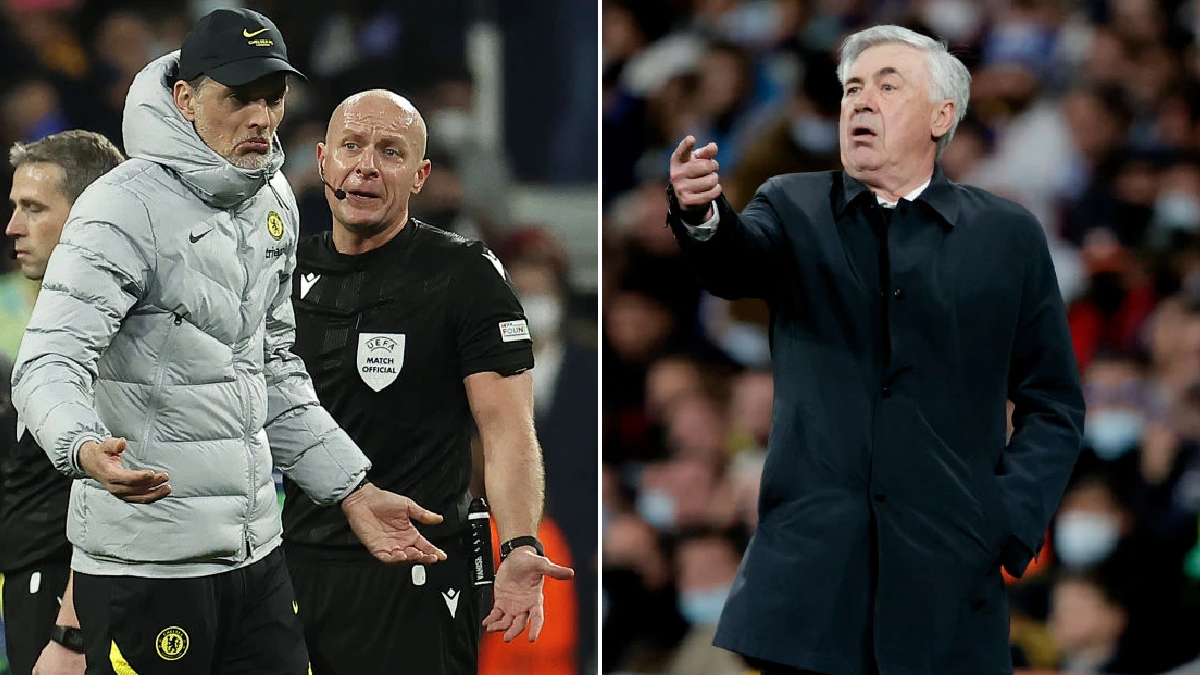 A chaotic contest was finally settled in the sixth minute of extra-time when Karim Benzema pounced to score his fourth goal of the tie and secure an astonishing 5-4 victory on aggregate for the Spanish giants.

Chelsea looked to have completed a remarkable comeback when Timo Werner fired his side into a scarcely comprehensible 3-0 lead on the night with 15 minutes remaining, as the Blues wiped out the 3-1 deficit from the first leg.

Shortly before Werner’s strike, Marcos Alonso had a goal chalked off by the VAR for a minuscule handball offence and Tuchel was annoyed the referee wasn’t invited to check the pitch side monitor.

He told BT Sport: ‘I didn’t see the goal that was disallowed. I’m very, very disappointed for the referee that he does not check it by himself.

‘Absolutely disappointed feeling in both matches that it was 51 on the other side with all decisions made but that’s what it is if you play Real Madrid in the Champions League. Unlucky today.’

Tuchel expanded on his grievances in his post match press conference, and revealed he was particularly irked when he saw Marciniak sharing a lighthearted moment with Real manager Ancelotti.

He said: ‘I was disappointed that the referee had a good time with my colleague, Carlo Ancelotti. I know Carlo is a gentleman and a nice guy, but when I wanted to go and say thank you for the match, I saw him smiling and laughing loudly with the opponents’ coach.

‘I think this is the very, very wrong time to do this after a final whistle and 126 minutes where one team gave all their hearts and fought until the last drop.

‘You go and see the referee smiling and laughing with the other coach. I think it is very, very bad timing. I told him this, and that’s it.

‘Maybe I get myself into a problem. But if you play Real Madrid, you cannot expect that everyone has the courage [to make decisions]. I also felt the little decisions in the first leg and the second leg today.

‘I did not see the goal, but I told him that I was super disappointed that he does not come out and check it on his own. In a match like this where you have a certain line to whistle, you should stay the boss and not give decisions like this to somebody in a chair who is isolated from the atmosphere.

‘He has a certain style and certain things that he allows and does not allow, and he follows a certain line – so I think he should stay in charge and check it on his own then he could also explain it better.

‘It is just my opinion. I thought we deserved more minutes in the end because it felt like we had no minutes to play in the second half of the extra time. Maybe it is too much to ask for in matches like this against this opponent. We had it in our hands, and we were not lucky enough. It is like this.’