Young Socceroos full-back Nathaniel Atkinson accepted responsibility for the goal that gave France the lead and sped them towards a 4-1 victory in the World Cup on Wednesday morning (AEDT), giving himself the alibi that in opposing the brilliant Kylian Mbappe, he was up against a player many grades above his pay scale.

But coach Graham Arnold deflected blame from Atkinson, saying he was part of a three-man plan for Mbappe.

“The kid actually did decently well,” Arnold said. “He did his best against one of the best players in the world. Especially in the first half, we had [Mathew] Leckie and Jackson Irvine to help him. That was the plan: when Mbappe got the ball, the three of them got out there and helped.

“But how do you stop someone so quick? It’s very difficult. It’s a great lesson for the kid. He’ll move on from it.”

Atkinson was both glad and sobered by the experience. “It’s probably the first time I’ve come up against this type of opposition in my career to be fair,” he said. “Obviously, it’s an eye-opener. There’s a reason why he’s earning $200 million a year, and I am where I am.”

Where he is most of the time is Hearts in the Scottish Premier League and this night in his sixth game for his country. Mbappe is at the top of the tree, and his game. 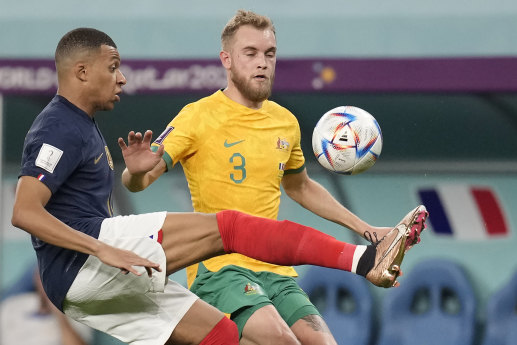 Kylian Mbappe was too quick and too clever for Nathaniel AtkinsonCredit:AP

“It’s not hidden, how quick that guy is,” Atkinson said. “You give him one step, and he’s gone. As a team, you can always come up with a plan. But sometimes if it’s one-v-one, he gets the better of you.

Fellow defender Kye Rowles empathised with Atkinson and Aziz Behich, who had his hands just as full with Ousmane Dembele on the other side of the pitch.

“They’re obviously quality players but Aziz and Natty held a good account of themselves all game,” Rowles said. “It’s not a nice thing to have those two running at you for 90 minutes, but I thought they’d done well, just their quality shone through in the end.”

Mbappe had a hand in three of France’s four goals, but in truth had hand, foot and head in everything that happened on the pitch in a dazzling display. For the goal that put France ahead, he and Adrien Rabiot combined to strip Atkinson after a heavy touch before Rabiot laid on a tap-in goal for Olivier Giroud.

“I’ve played that scenario 50 times over, and I could probably come up with 50 different solutions.” Atkinson said. “But that’s football. I’m disappointed, I’ll take full responsibility for the second goal. The beauty is I’ve got a game in three days to fix it.

“Anything can happen. You see what Saudi did do against Argentina. Obviously, we’ve come against the world champions, and there’s a reason for that – they’re a good football team. We can take confidence from the way we played early on.”

Australia shocked the French with the first goal, scored by Craig Goodwin and made by the sort of robust play Arnold had preached. But it lasted 18 minutes. However physical Australia might try to be, France were their equal and better. “I thought we started the game very well,” Arnold said. “[But] physically, they were just so much bigger, faster and stronger than us today.”

Rowles provided an insight into how it is to square up to the reigning World Cup holders in full flight. “They’re slow, slow … they kind of lull you into this false sense of security,” he said, “and then they just hit you, pretty fast. When they cross, it’s just the perfect ball every time, pretty much – that’s what quality players do.”