The teenager who snubbed Spain for Guinea, Barcelona’s latest wonderkid on the wing and the Nigeria ace Arsenal were desperate to sign… the young stars to look out for at the Africa Cup of Nations

The Africa Cup of Nations has acted as the springboard in several young players’ careers over the years – now it’s time for the next generation to step up.

The last edition saw young Empoli midfielder Ismael Bennacer emerge into the limelight by winning Player of the Tournament, which quickly earned him a move to AC Milan and the dizzy heights of the San Siro six months later.

In 2000, Cameroon defender Lauren won the same prize which was then followed up by a move to Arsenal, where he became one of Arsene Wenger’s Invicibles, while a young Saint-Etienne striker by the name of Pierre-Emerick Aubameyang was top scorer in 2012.

This winter will see an exciting crop of young players demonstrate their credentials of becoming the world’s best in Cameroon, so Sportsmail goes through the top gems aged 23 and under to look out for… 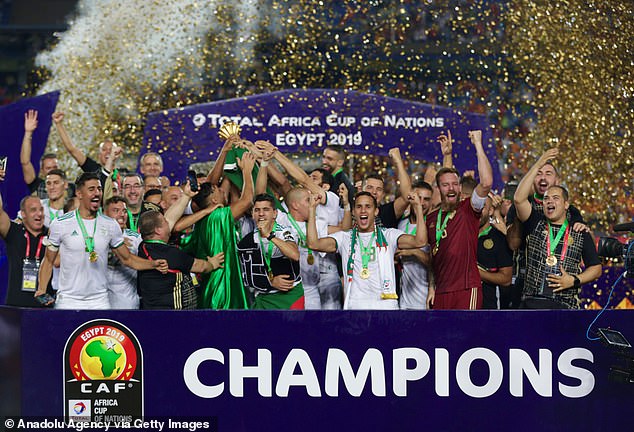 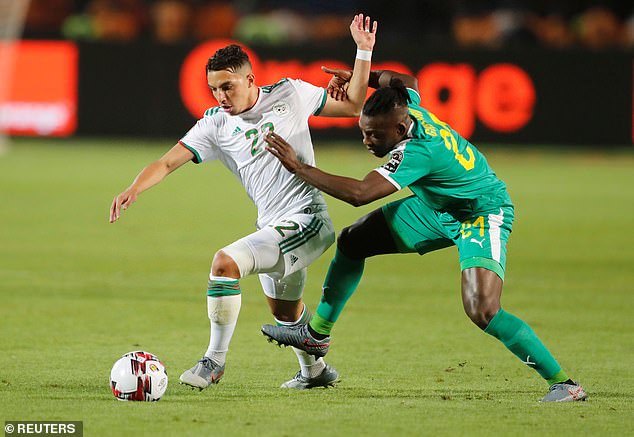 There was some doubt whether Nigeria striker Victor Osimhen would make this winter’s AFCON due to injury, but a miraculous recovery from the forward has boosted his country’s chances of winning the tournament.

Osimhen was in fine form for Napoli, who topped the table at the start of the season, but a shoulder injury picked up in November was set to rule him out for two to three months, effectively forcing him to skip the Nations Cup. 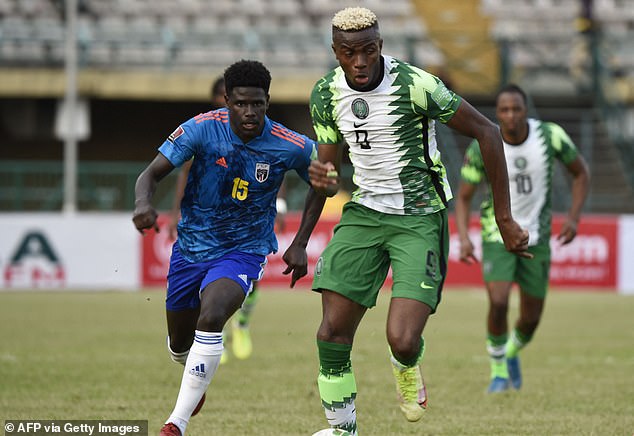 But the 23-year-old came back early from that setback was named in the Super Eagles’ squad for this winter’s competition – and could well form a devastating front line with Kelechi Iheanacho, Samuel Chukwueze and Emmanuel Dennis.

Osimhen was in exceptional form up front for Luciano Spalletti’s Napoli, scoring nine goals in 14 matches for the Partenopei before his injury – including four goals in three Europa League outings.

Fast, strong and possessing a devastating leap, Osimhen will be hoping to emulate the likes of Didier Drogba and Aubameyang by firing on all cylinders at AFCON.

Burkina Faso may be unknown to many having never played at the World Cup – but they love the Africa Cup of Nations.

The nation hosted the 1998 World Cup and reached the semi-finals, before going one step further by playing in the 2013 final – but lost 1-0 to Nigeria. The Burkinians tend to produce some interesting talent – and defender Edmond Tapsoba is one of them. 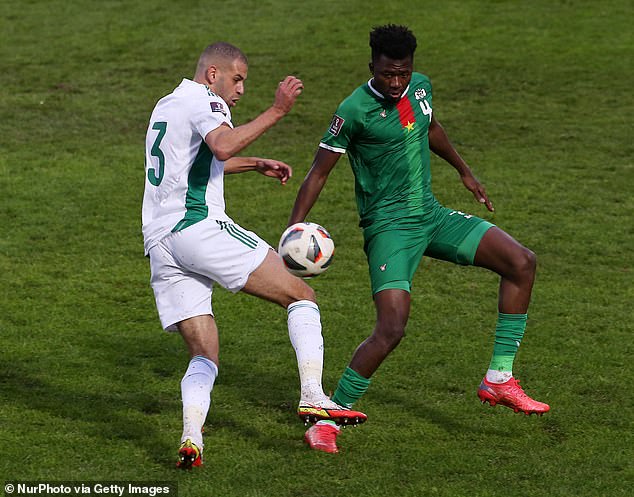 At 6ft 4in, the centre-back is a dominant force in the backline and also possesses a great deal of pace. Tapsoba is also keen on a goal too – and often takes penalties for both his club Bayer Leverkusen and country Burkina Faso.

The 22-year-old has been linked in the past to Arsenal and Chelsea and is definitely tipped to be a star for the future.

The defender has come a long way after growing up in the famine period in Burkina Faso – but this could be his chance to seal a big-money move in 2022.

Achraf Hakimi may be 23-years-old but it feels like the right-back has been around for many more years than he has.

In just four years, the Moroccan has gone from a Real Madrid back-up player to the best right-back Africa has to offer, according to the International Federation of Football History and Statistics who named him in the continent’s team of 2021. 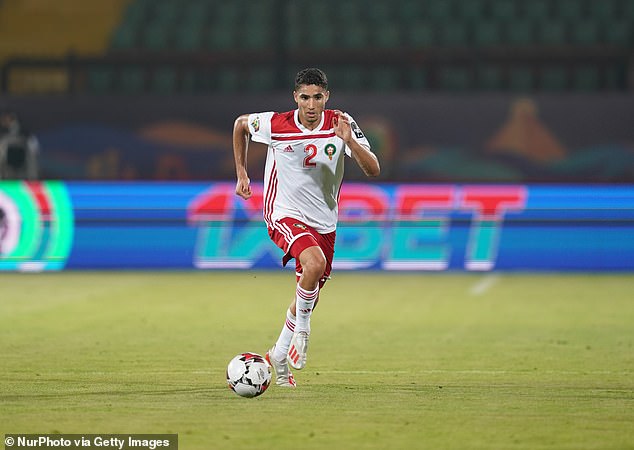 Hakimi is now continuing his game with the world’s best, having joined the likes of Lionel Messi, Kylian Mbappe and Neymar after his £60million move to PSG from Inter Milan over the summer.

The defender is just as good going forwards as he is defensively, with three goals and three assists in France’s top-flight this season.

Capable of playing in the backline or up front on either wing for his country, Hakimi will be a key player for his country at this year’s AFCON, no matter where he plays.

The right-back will also close in on 50 caps for Morocco should they go all the way, a brilliant motivation for Hakimi to lead his nation to glory.

While Guinea’s midfield will mainly be focused on Liverpool’s Naby Keita, the Reds star could be partnered by and up-and-coming teenager in the middle of the park.

Ilaix Moriba was tipped for great things at Barcelona but the Catalans’ financial woes meant the teenage midfielder was pushed out the door to RB Leipzig in a £13.5million transfer. 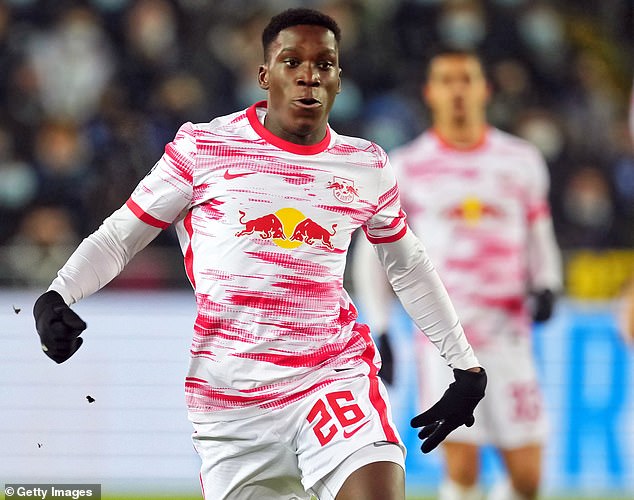 The midfielder is still developing his game in Germany and has been limited to just half an hour of Bundesliga football for Leipzig, but did feature in half of the club’s Champions League group games this season.

Moriba caught the eye in Barcelona’s La Masia academy and scored a hat-trick for the club’s Under-19s team aged just 15. He is uncapped at international level for Guinea, after pledging his allegiance to the country of his birth, even though he is eligible for Spain.

And should Moriba, who recently tested positive for Covid ahead of the tournament, make his debut at AFCON this month, then it could mark the start of something special for the highly-rated teen.

This will be Abde Ezzalzouli’s first Africa Cup of Nations, but the winger has enjoyed a fair share of firsts in recent months.

He became the first Moroccan player to feature for Barcelona when he made his first-team debut for the Catalans in October. 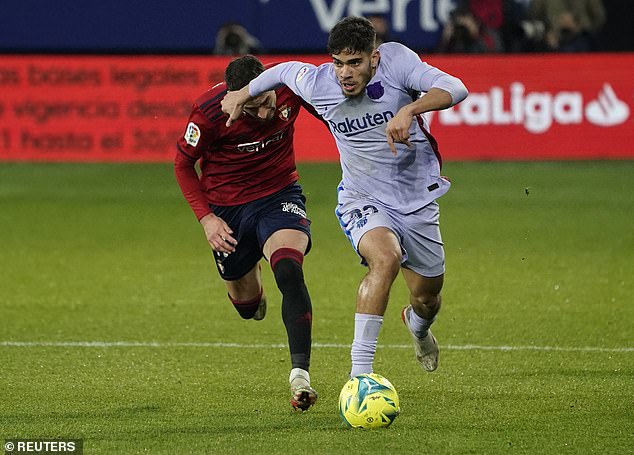 Under new boss Xavi, Abde has become almost a key player on the wing as the Barcelona coach turns to youth in his first half-season at the Camp Nou.

The 20-year-old then found the net for the first time at Barcelona in the club’s 2-2 draw at Osasuna, showing he is more than capable of delivering on the biggest stage.

Abde is a tricky and quick winger but his main attribute is a desire to get down the line and play a final ball. Morocco will turn to Achraf Hakimi for experience and leadership – but keep an eye on this new kid on the block.

If you’re in doubt about whether Samuel Chukwueze will make it at the top, just ask Arsenal’s defenders.

The Villarreal winger ran riot against the Gunners in their Europa League semi-final first-leg earlier this year, helping Unai Emery’s Yellow Submarine to a 2-1 victory that took them through to the final.

Chukwueze suffered a serious knee injury during the return leg in London but has returned in time for AFCON and is starting to get back to his best. 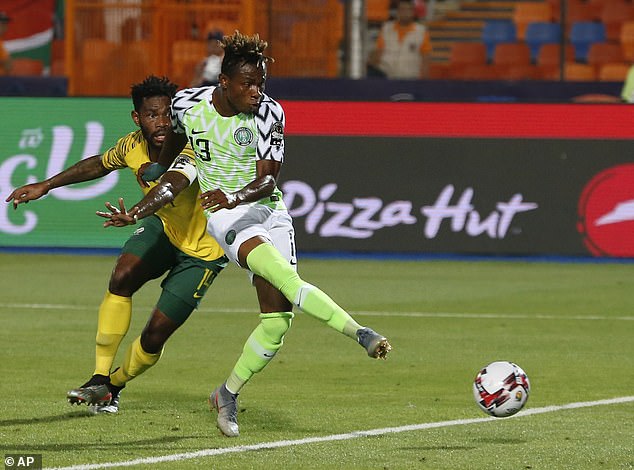 The 22-year-old winger can beat any defender in the game with some great trickery in his locker – and a move to the Premier League appears inevitable for the Nigerian.

Arsenal tried to sign the winger before he picked Villarreal, but the player’s management team thought it better Chukwueze went to Spain.

Now he has one AFCON campaign under his belt and 100 LaLiga appearances at the age of 22, this boy is just getting started.

Big things are expected from Mohamed Camara, who set the bar very high by playing a crucial role in RB Salzburg reaching the Champions League knockout stages for the first time. 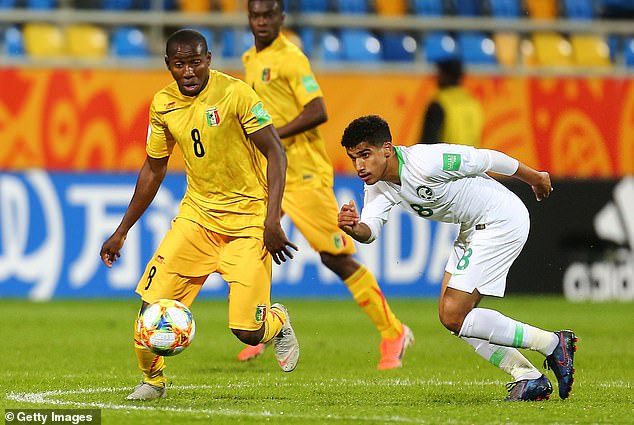 Alongside Brighton’s Yves Bissouma, Camara could help give Mali a real base in midfield that will be difficult to purge and pick off.

The 21-year-old has put a three-mont ban from football due to doping violations behind him and is now set to show Africa what he can do.