Doha, Qatar: The sound of drilling echoes among skyscrapers downtown. At a desert encampment, loaders kick up dust between rows of hastily erected beige tents. Newly planted palm trees, their branches still wrapped in brown paper, line the coastal promenade. And at the water’s edge, the minutes tick away on a bright red, hourglass-shaped countdown clock.

With just a few weeks to go until the World Cup kicks off, Qatar is racing to be ready to host the tournament, which will bring millions of eyes and hundreds of thousands of international spectators to this tiny desert peninsula in the Persian Gulf.

Qatar, the smallest country to ever host the World Cup, has poured more than $US220 billion ($348 billion) into preparations for the event, erecting miles of highways, a metro system, a new airport, stadiums and high-rises.

For the Qataris, the all-out push into the sporting world is an effort to establish an image as a global player and fulfil the vision of the country’s leader, Sheikh Tamim bin Hamad al-Thani, to economically develop the country.

So far, though, that gamble has mostly brought controversy and criticism.

Dire working conditions for migrant labourers in Qatar came under fire after scores of them died on World Cup-related construction sites. The introduction of major labor reforms, welcomed by international monitors, was met with private grumblings among Qatari businesspeople, and there have been criticisms that the rules have been applied unevenly. Advocacy groups have slammed Qatar’s human rights record, including laws criminalising homosexuality and restricting free speech. 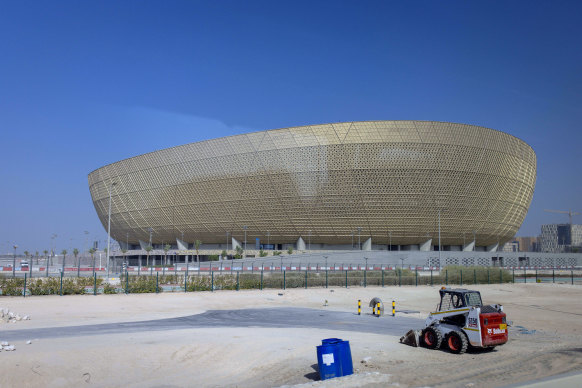 The air-conditioned, 80,000-seat showpiece stadium in Lusail, Qatar, on June 13, 2022. Credit:Tasneem Alsultan for the The New York Times

And influence campaigns by Qatar’s rivals in the region have amplified a deluge of critical press — stoking regional tensions on the heels of a three-year blockade of Qatar led by its largest Arab neighbours, Saudi Arabia and the United Arab Emirates.

As the event draws near, Qatari officials have grown increasingly defensive about critical reports from rights advocacy groups and others.

“Since we won the honour of hosting the World Cup, Qatar has faced an unprecedented campaign that no other host nation has received,” Sheikh Tamim said at a session of the country’s Shura Council earlier this week. That effort, he added, has “reached such a ferocity that many, unfortunately, wonder about the real reasons and motives behind it.”

Through it all, Qatari officials have privately hoped that the decade of scrutiny would be overshadowed by the spectacle of a successful, spectacular and even over-the-top tournament. They have even enlisted fans in that effort, offering them free trips to the World Cup with the understanding they will promote positive messages about Qatar while in the country.

And now, on the precipice of this long-awaited moment, they have tried to drive home the message that Qatar is more than ready to take its place on the world stage.

When it comes to extravagance, in many ways Qatar has already delivered on its promise.

The country has produced eight new stadiums with soccer pitches covered in grass flown in from the United States and outdoor air conditioning systems that can lower the temperature by more than 20 degrees Fahrenheit (11 degrees Celsius). Last month, Qatari officials announced the addition of 30,000 rooms to meet the surge in demand for accommodation, including some on cruise ships and traditional wooden boats known as dhows.

They have announced entertainment, including beach clubs, carnivals, futuristic light shows and two-month-long music festivals. One involves DJs performing on a 50-foot-tall, flame-flowing mechanical spider borrowed from the Glastonbury Festival in England and reminiscent of a futuristic alien tank from the video game Halo. 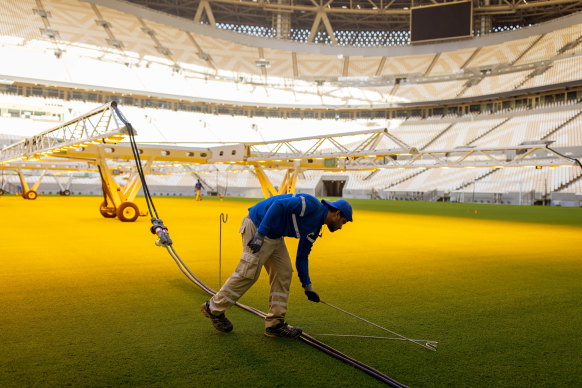 Lusail Stadium, which will host the World Cup final, in June. Qatar has built eight new stadiums with soccer pitches covered in grass flown in from the United States.Credit:Tasneem Alsultan for The New York Times

In the not-too-distant past, this extravagance would have been almost unimaginable in Qatar, a sun-parched sliver of a country that for much of the 20th century was little more than a barren backwater for pearl divers and pirates. But as the country’s fortunes transformed with a natural gas boom in the 1990s, so, too, did Doha’s landscape as it sprouted skyscrapers, sprawling malls and a pearl-shaped artificial island off its coast. Winning the World Cup bid accelerated that development at a dizzying pace.

“What is this tournament about for us? What does it help us achieve?” Hassan Al Thawadi, secretary-general of Qatar’s World Cup organisation, the Supreme Committee for Delivery and Legacy, said in an interview. “We’re using this tournament as a vehicle for change.”

But many international fans, teams and spectators remain sceptical about how well that newly minted infrastructure will hold up during the tournament. An estimated 1.5 million international visitors — around half of Qatar’s total population — will pour into the country over the month-long event, which is typically hosted across multiple, major cities. Qatar is about the size of Connecticut.

Some fans will be staying in basic accommodation, like refurbished shipping containers and glamping tents, constructed only weeks before they arrive. Motorcades for the teams and VIPs, private cars and thousands of free buses to transport fans will flood the roads — bringing the spectre of bumper-to-bumper traffic. The city’s new international airport will not be able to handle the crowds on its own, so its predecessor has been put back into service. 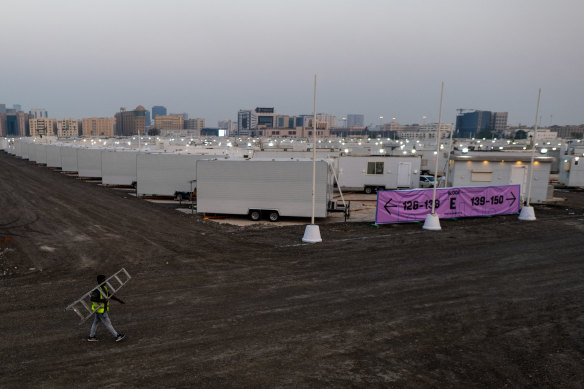 A worker walks at the Caravan City, an ongoing project to host fans during the Qatar 2022 FIFA World Cup football tournament.Credit:Jewel Samad/AFP

Housekeepers in one ritzy hotel in West Bay, one of Doha’s upscale neighbourhoods, will be tasked with cleaning 80 rooms a day — up from the usual 20, they say. When asked if he thought the newly minted metro could handle thousands of drunk fans, the station agent at a stop in the neighbourhood smiled, shook his head and muttered, “No way,” between exaggerated coughs.

“It was just a cough! Nothing else!” the agent said, laughing. He said he was not authorised to talk to the press.

The sheer size of the event means there will be unexpected logistical challenges. But some questioned Qatar’s preparedness even for the inevitable, after spectators who attended a match in a World Cup stadium in September complained of stands running out of water by halftime and huge lines outside the metro as people left the stadium.

Qatari officials and FIFA, soccer’s governing body, have framed those issues as growing pains and assured people that despite the cranes, scaffolding and drilling still scattered across the city, the major infrastructure needed for the tournament was complete. But even they admit that with setbacks and delays from the COVID-19 pandemic, the country has not been able to fully test its readiness.

“The full-blown stress test where you put everything under complete stress, to my satisfaction, hasn’t been achieved,” Al Thawadi said. But he added that in test events, “as issues started arising, I could see the teams being able to fix them quickly and react to them very quickly.” 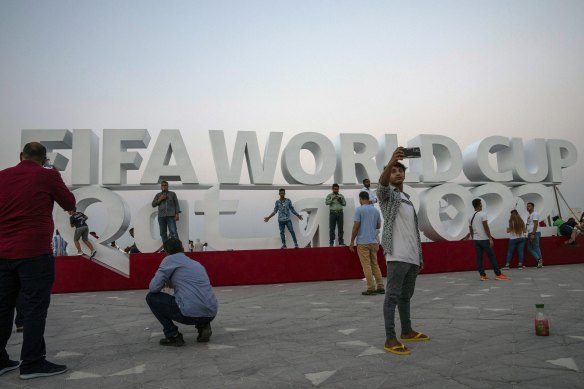 People take photographs in front of a sign representing FIFA World Cup 2022 in Doha on October 21, just 30 days away from the event.Credit:AP

Human rights groups have also raised concerns over how Qatari police will handle violations by foreigners of local laws in a country that has criminalised homosexuality and sex outside of marriage, and where victims of sexual assault have been liable to face charges themselves if they report the incident.

Unofficially, Qatari authorities say that the country has begun training police officers on how to respond to cases of sexual assault — the risk of which increases at any large sporting event — and that police will not interfere with LGBTQ activists who wave rainbow flags or stage small protests unless someone is at risk of physical harm.

But many fans say authorities have not gone far enough.

“There has been very little concrete commitment” on these issues, said Ronan Evain, executive director of Football Supporters Europe, an umbrella organisation of fan groups.

Qatari officials are under pressure from within as well. Many Qataris lean more conservative than their country’s top leadership. Eyeing neighbouring Dubai, United Arab Emirates, the so-called Las Vegas of the Gulf, some Qataris have bristled at the Emir’s grand economic development scheme, which they worry risks erasing Qatar’s cultural heritage.

One recent evening in Souk Waqif, the city’s celebrated traditional marketplace, crowds of locals and tourists pushed through the winding alleys lined with shops hawking household goods, artisanal jewellery, clothes and spices like saffron and cardamom. The souk was founded more than a century ago, but like so much else in Doha today, the actual building is new. Most of the market was destroyed in a fire in 2003 and later rebuilt to mimic the appearance of the old souk. 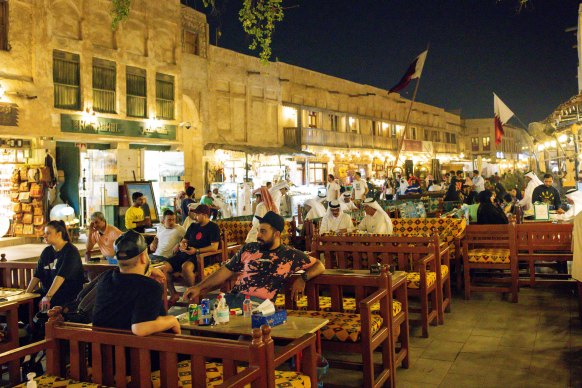 Souq Waqif, a traditional marketplace in Doha, in June.Credit:Tasneem Alsultan for the New York Times

Abdullah Abdulkadir, 38, sat with a few friends on the wooden benches of a small shop tucked into a narrow alleyway, the smell of tobacco filling the room. A few of the other men had purchased tickets to a game or two of the World Cup, and they flashed grins as they imagined seeing soccer stars like Lionel Messi and enjoying their city-turned-carnival. One man said he had bought a scooter to whiz past any gridlock lest he miss his game.

But Abdulkadir refused to join them. He griped about the traffic and the crowds inundating the otherwise sleepy city. But more than anything, the event had come to embody his grievances around the rapid pace of change in Qatar.

As a child, he said, he lived about 1 mile away from the souk. When the neighbourhood was taken over by new developments, his family moved to an apartment in Al Wakrah, a coastal enclave south of the city. Their new apartment was large; since the gas boom, Qatari citizens have enjoyed some of the highest average incomes in the world, free land and cushy jobs. But he missed the sense of community in his old neighbourhood. Driving through it today, he said, it is almost unrecognisable.

“Qatar is like another country now,” he said, taking a short puff from the wooden pipe of his hookah.

A few blocks away, a swarm of fans of the Tunisia men’s soccer team poured through the main thoroughfare screaming club chants, their bright red jerseys standing out against the souk’s beige walls. The watershed moment for Qatar had already begun.

This article originally appeared in The New York Times.