Chelsea could be tempted by young talents Lewis Hall and Harvey Vale, and Robbie Savage’s son Charlie may feature for Manchester United after a pep talk from Ronaldo… the 10 kids who are in line to play on the final day

Sunday’s Premier League final day is set to stage a hat-trick of mouth-watering affairs, including a title showdown between Manchester City and Liverpool, a top-four skirmish in North London and a relegation scrap between Leeds and Burnley.

Yet for the clubs whose Premier League fate has all-but been decided already, the last day of the season offers a golden opportunity to hand valuable minutes to bright, young stars.

Sportsmail has compiled a list of 10 youngsters in contention to feature on Sunday. 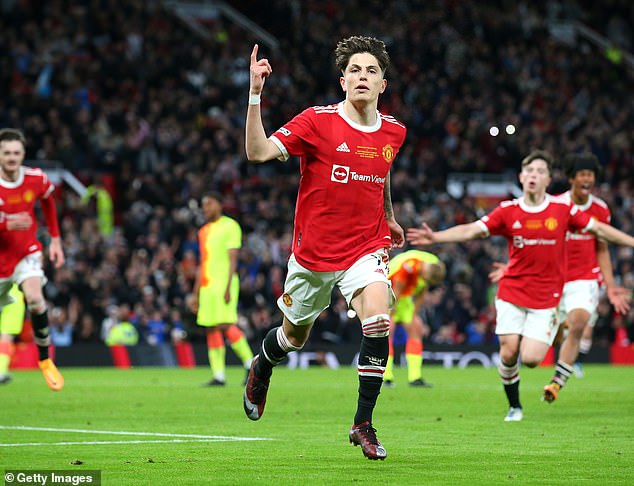 Thanks to Arsenal’s disappointing defeat to Newcastle on Monday, Chelsea have retained their position in the Champions League next season and face already-relegated Watford at Stamford Bridge on Sunday.

Blues boss Thomas Tuchel may not find a better opportunity to introduce to the fold central midfielder Lewis Hall , who featured on the bench against Liverpool and Brighton in January.

Although Hall, 17, has yet to make his Premier League debut, he did become the youngest ever player to start an FA Cup tie for Chelsea during the 5-1 win against Chesterfield.

Whilst operating predominantly as a midfielder, the versatile youngster is capable of playing at left-back, which boosts his chances of an appearance.

Having entrusted Marcus Alonso to deputise consistently for the injured Ben Chilwell these past months, Tuchel may decide it’s time to offer the Spaniard a rest and hand the youngster his Premier League debut. 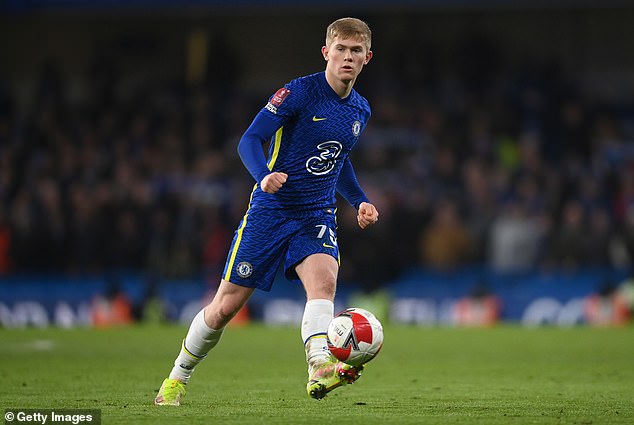 Another Blues teenager gunning for an opportunity, Harvey Vale made three FA Cup and two EFL Cup appearances for Tuchel’s side after impressing at youth level.

The attacking midfielder scored four goals in four games at the start of the Premier League 2 campaign and was subsequently introduced to the Champions League squad, featuring on the bench four times before Chelsea’s exit to Real Madrid.

The homegrown 18-year-old could emerge as a long-term deputy to Mason Mount, and Tuchel may be tempted to hand him a chance against Watford before making a decision on his involvement with the senior squad next season. 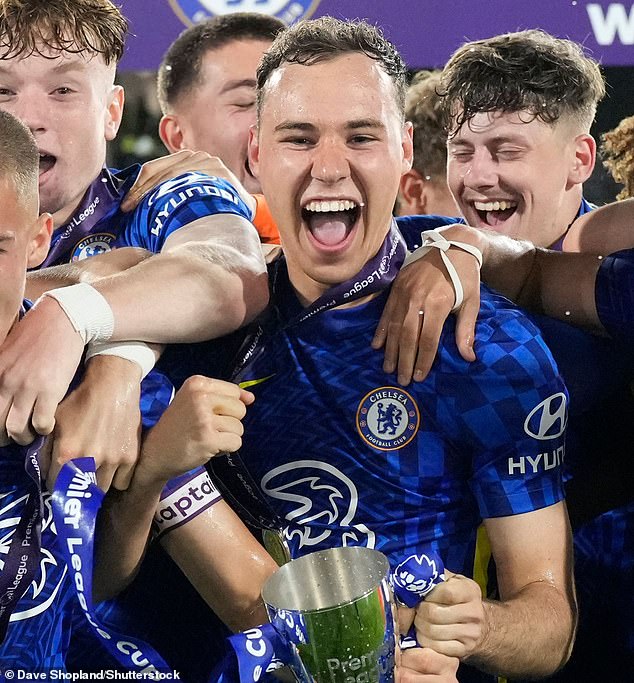 Defensive midfielder and son of former Red Devils academy graduate – and Wales, Leicester, Birmingham and Blackburn midfielder – Robbie Savage, Charlie Savage has been a regular at under-23 level this season.

He won a cameo appearance in the Champions League against Young Boys in December but has yet to earn his Premier League stripes.

Ahead of Manchester United’s trip to Selhurst Park, the club tweeted videos of Savage, 19, in training with the first-team squad and listening intently to advice from Cristiano Ronaldo.

United’s defensive frailties – 56 goals conceded in the Premier League – will need addressing next season and Ralf Rangnick may feel compelled to offer the young midfield anchor an audition ahead of Erik ten Hag’s arrival. 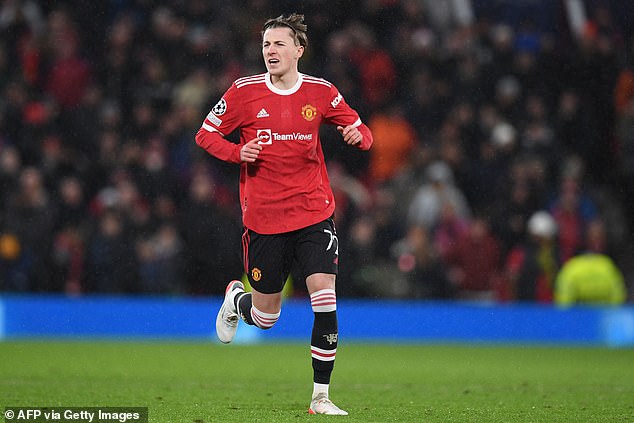 The 17-year-old Argentinian made his Premier League debut for the Red Devils against Chelsea in April and has been a regular fixture on Rangnick’s bench for the last six matches.

Ever since the renowned class of ’92, there has been a romance at Old Trafford for nurturing young players into the first team and Rangnick may make that his lasting legacy on the final day against Crystal Palace.

Winger Alejandro Garnacho may be one of the youngsters called upon by the German boss, as the club continues to search for the right formula on each flank.

In the FA Youth Cup this campaign, Garnacho provided seven goals and three assists en route to the trophy.

After navigating through an exhausting schedule of back-to-back games and having secured European football ahead of next season, Hammers boss David Moyes may feel his senior players deserve a break on the final day against Brighton.

The Scottish manager has shown he is not afraid to trust the youth ranks, having handed eight youngsters an appearance in West Ham’s Europa League loss to Dinamo Zagreb in December.

Although striker Armstrong Okoflex was not selected on that occasion, he has since found a spot on the bench nine times in the Premier League, most recently against Manchester City last Sunday.

Ahead of next season, West Ham are still without a recognised centre forward to play back-up to Michail Antonio, and with Okoflex managing two hat-tricks and a total of 12 goals with the under-23s this season, Moyes may feel he is worthy of an opportunity. 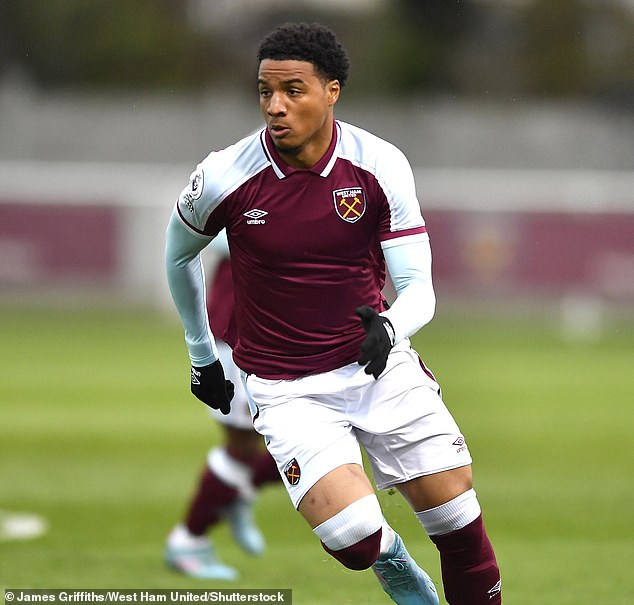 Two draws and three defeats in the last five games has put Wolves in a poor run of form ahead of their trip to Anfield on Sunday.

As European football has slipped through the fingers, Wolves chief Bruno Lage may feel obliged to shake things up against Liverpool – and this could be excellent news for 19-year-old Welshman Chem Campbell.

The attacking midfielder has scored nine and assisted eight in 18 appearances for the under-23s, and won his Premier League debut against Newcastle in April. 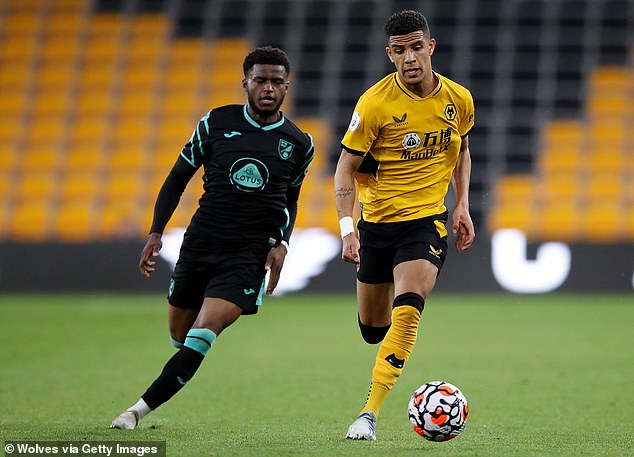 In what has been a strange and rather disjointed season at the King Power Stadium, Leicester have managed to unearth a hidden gem at the heart of midfield in Kiernan Dewsbury-Hall.

The emergence of the 23-year-old, who won Leicester’s Players’ Player of the Season earlier this week, may give boss Brendan Rodgers confidence that there are more talented young midfielders in his ranks.

Central midfielder Lewis Brunt, 21, was handed his Premier League debut against Spurs on May 1, having impressed during Leicester’s 4-1 win against Watford in the FA Cup third round in January.

Brunt has been a stalwart for the under-23s this campaign, making 20 appearances and scoring three goals. 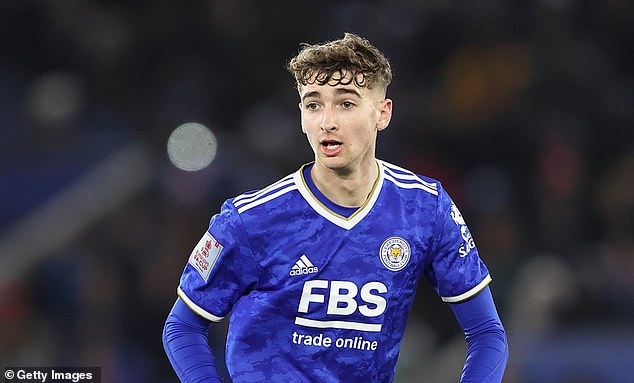 Despite sitting in the top half on the table ahead of Sunday, Brighton have the fourth-worst attacking record in the league behind Burnley and Championship-bound Watford and Norwich.

The need for a fresh goal-scoring striker at the Amex is what’s needed to push Brighton to the next level, and the club may prefer to dive into their youth ranks than empty the pockets in the transfer window this summer.

Therefore, with little to play for on the final day, Graham Potter might turn to 17-year-old striker Evan Ferguson, who has scored eight goals in Premier League 2 this season.

The Irishman has been a stalwart on Potter’s bench since December and earned his Premier League stripes against Burnley in February. 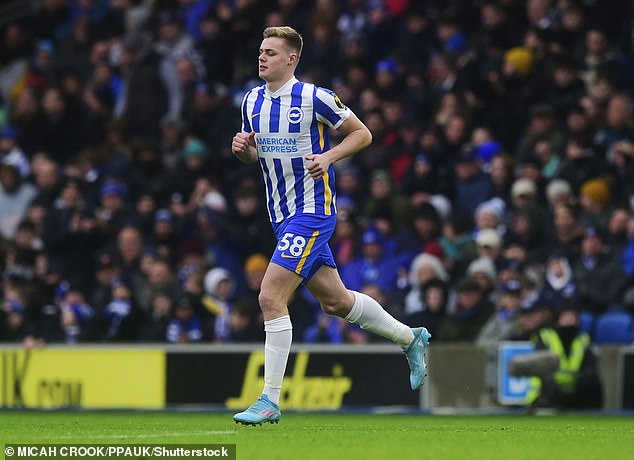 Having comfortably secured their top-flight survival, Brentford have the luxury of testing out new players free of risk on Sunday.

Manager Thomas Frank has had versatile defender Fin Stevens on his bench 22 times this season, despite calling on the 19-year-old just once during that period.

Stevens is capable of operating at right back, left back and right midfield, which boosts his chance of an appearance should Frank choose to switch up the first team against Leeds.

In addition to his Premier League cameo feature against Southampton in January, Stevens played twice in the FA Cup and once in the EFL Cup this campaign. 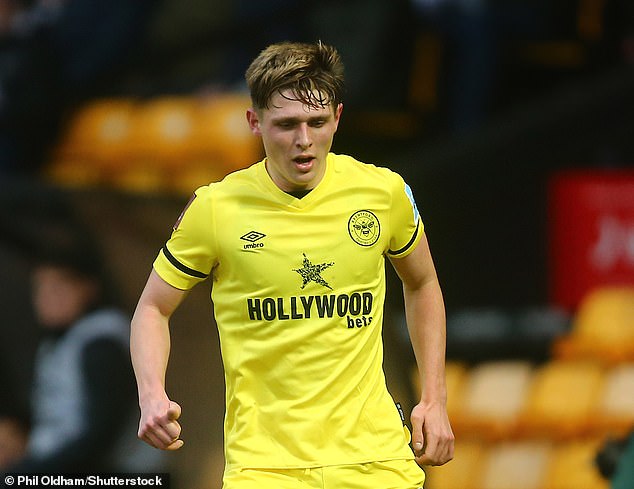 The 19-year-old earned his fourth call-up to the senior squad against Aston Villa last Sunday but hasn’t won any minutes since his Premier League debut against Chelsea on the opening weekend of the season.

With a mid-table finish inevitable, boss Patrick Vieira could offer Rak-Sakyi a reward for his performances with the reserves by playing him in front of the home fans against Manchester United on Sunday. 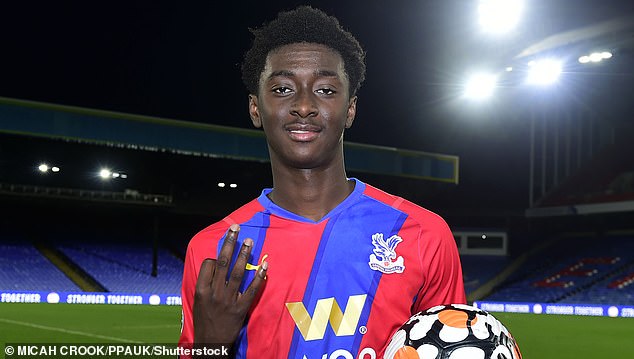