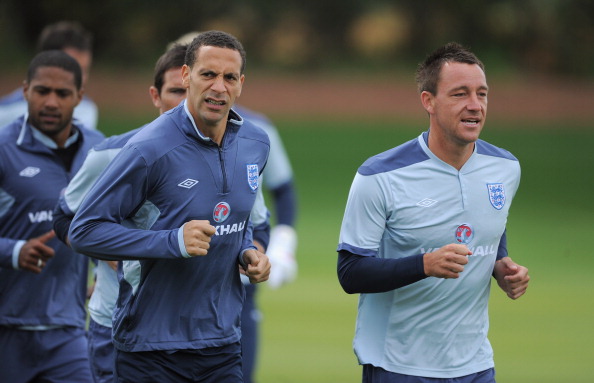 Chelsea legend John Terry has hit back at Rio Ferdinand after the former Manchester United ace named Virgil van Dijk and Jaap Stam ahead of his former England team-mate when ranking the best defenders in Premier League history.

Speaking to Van Dijk on his YouTube show ‘Between the Lines’, Ferdinand and the Dutchman discussed how the Liverpool star compares to the best centre-backs in the history of the league.

Van Dijk put himself up there with the greats after transforming Liverpool’s fortunes since his £75million arrival from Southampton in 2018.

However, he has won just one Premier League, which pales into comparison to the likes of Ferdinand and Terry.

Nevertheless, when deliberating over his top five, Ferdinand selected himself in first place with Nemanja Vidic in second and Van Dijk in third, ahead of Stam and Terry in fifth.

After putting Van Dijk in third, the Dutchman disagreed by saying: ‘I’ve only won one Premier League!’ but Ferdinand responded: ‘Yeah I know but I think the impact you have on the team is massive and your attributes will put you right in the top tier.’

Speaking about Terry, Ferdinand said: ‘In terms of his longevity at that club, what they won, body on the line, a much better footballer than people give him credit for, could play off his left and right foot.’

But that wasn’t enough for Terry, who wasn’t happy with his placement in Ferdinand’s rankings.

The former Chelsea skipper posted an Instagram story with a number of graphics to put his case forward, including the number of times he made the World XI and his win percentage being higher than any other defender.

Terry accompanied his response with the comment: ‘Opinions are great but stats don’t lie…’