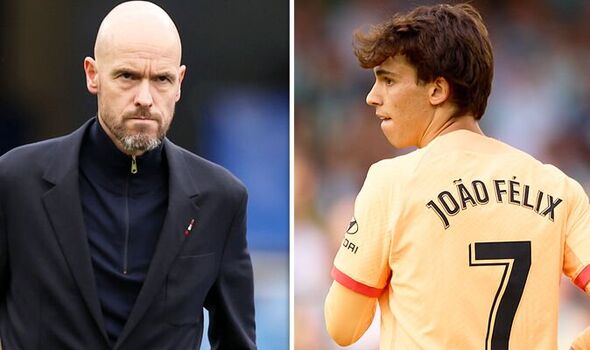 Manchester United manager Erik ten Hag would reportedly prefer to sign three different strikers ahead of Joao Felix. Atletico Madrid star Felix has been linked with a move to Old Trafford as a potential replacement for Cristiano Ronaldo.

Ronaldo’s future at United looks increasingly uncertain. The Portugal superstar was banished from first-team training last week and left out of the squad to face Chelsea after refusing to come on as a substitute in the win over Tottenham.

Whenever Ronaldo does leave, Ten Hag will need to bring in reinforcement up front. Anthony Martial has struggled with injury this season, while Marcus Rashford prefers to play out wide.

French outlet Jeunes Footeux has reiterated previous reports that Felix is one player United are looking at. However, he is not the top attacking target for Ten Hag.

Felix is not an out-and-out centre-forward and often plays either as an attacking midfielder or a second striker. Jeunes Footeux says there are three other players Ten Hag would prefer to sign.

They are Lille’s Jonathan David, Bayer Leverkusen’s Patrik Schick and Lyon’s Moussa Dembele. Ten Hag would prefer a profile of forward who is more naturally suited to the role.

David has been linked with a move to the Premier League following fine back-to-back seasons in Ligue 1. He has netted 32 times across the last two campaigns for Lille and already has nine goals to his name in 11 appearances this term.

The Canada international still has two-and-a-half years remaining on his contract. Schick, meanwhile, was prolific for Leverkusen last term.

Only Erling Haaland scored more Bundesliga goals than the Czech Republic star last season. He has just three strikes to his name so far this term though, in 15 appearances, and has four-and-a-half years remaining on his contract.

The last of the trio Ten Hag has an eye on is Dembele. The 26-year-old has long been linked with a move to United.

Alexandre Lacazette’s return to Lyon this summer has restricted Dembele’s game time so far this season. The former Fulham and Celtic striker has two goals in nine outings, five of which have been as a substitute.

He scored 21 times in Ligue 1 last term but will be frustrated by his lack of minutes this season. Dembele will soon enter the final 18 months of his contract so could be the easiest deal for United to complete.