Steve Cooper is on the brink of taking Nottingham Forest back to the big time. His courage and attacking brand of football have seen them rise from rock bottom to vying for automatic promotion… and now only Bournemouth stand in their way

When a new manager takes charge of a struggling club, a standard move is to make a rabble-rousing speech to inspire a group of faltering players.

On his first day at Nottingham Forest, Steve Cooper opted for a different approach.

Cooper arrived at Forest in September with the club bottom of the Championship after their dreadful start to the campaign led to the sacking of Chris Hughton. Yet after saying a few words to his players and staff, Cooper simply listened.

We can be fairly sure that in those initial conversations no one was predicting that come May, Forest would be preparing to face Bournemouth at the Vitality Stadium with automatic promotion to the Premier League up for grabs. 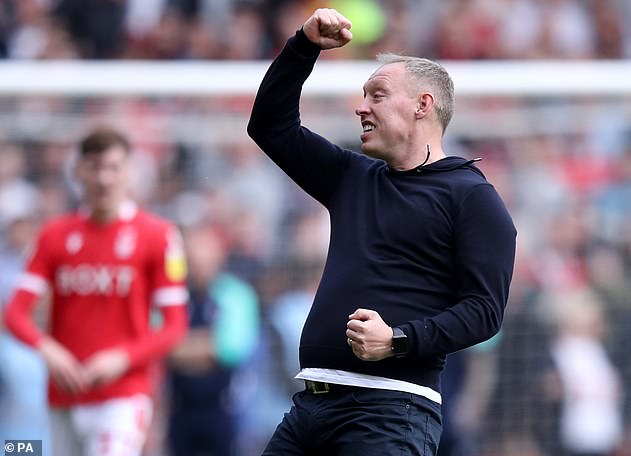 However, having heard what they had to say, the Welshman was even more convinced of his original plan: he was going to set Forest up to play attacking football.

It was a bold move but Cooper understood that with Forest in such trouble, courage was the way forward. Training was altered so Cooper could make the most of his players’ attacking potential, rather than stifling the opposition.

The move has worked a treat: if Forest win at Bournemouth on Tuesday night, they set up a thrilling final day on which promotion could be decided on goal difference or even goals scored.

Should they triumph, Forest will return to the Premier League for the first time this century. 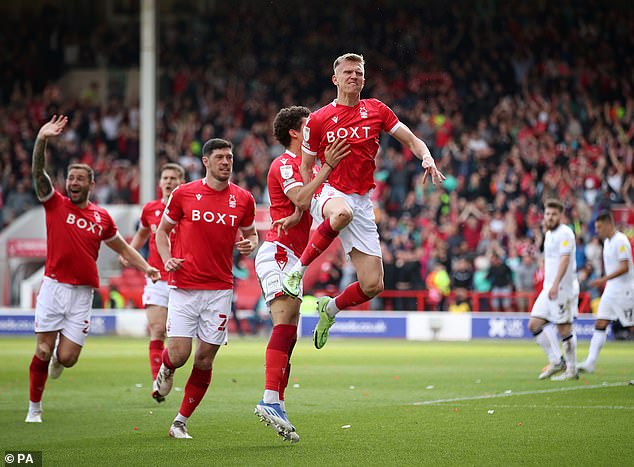 ‘Our ambition is to play a certain style of football,’ Cooper said. ‘It is not easy because I am asking for us to play a brave, positional game which is about trying to be creative and exciting.

‘Those are things that are hard things to do in the game. Sometimes we get it right, other times we don’t. That’s football.’

Cooper has also given greater responsibility to his players, with Lewis Grabban and Jack Colback among the senior stars part of a dressing room leadership group. The manager encourages players to bring any issues to him when they arise, rather than allowing them to fester within the squad – and it is not only the senior stars who have benefited from Cooper’s arrival. 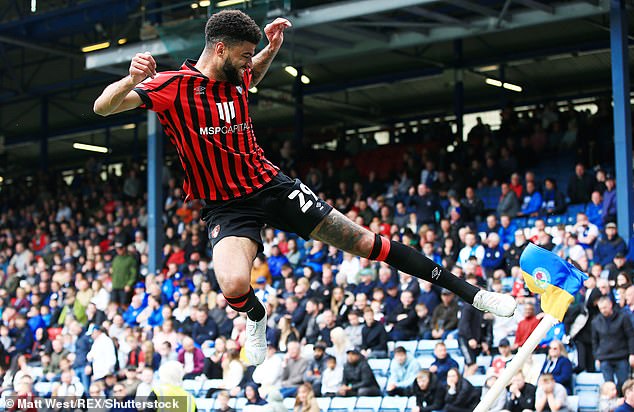 Forward Brennan Johnson was the subject of a substantial offer from Brentford in January but was so settled at the City Ground that he made no push to leave. Tying the 20-year-old to a new deal might be a little trickier if Forest do not

Since joining on loan from Middlesbrough, full-back Djed Spence, 21, has looked every inch a Premier League player and has attracted interest from Arsenal and Tottenham. The 21-year-old midfielder James Garner, borrowed from Manchester United, is another to have flourished under Cooper, as have homegrown pair Ryan Yates and Joe Worrall.

‘I have been coaching professionally for 20 years now and most of that has been in youth development where you are drumming that into young players that they need to take the ball in difficult positions when they are under pressure,’ he explained.

‘You want them to be free, to be creative, to express themselves, to play with team-mates, all these sorts of things. That is my belief. All we are really trying to do now is to do it at a more senior level. It is a bit different, of course, but those principles remain.’ 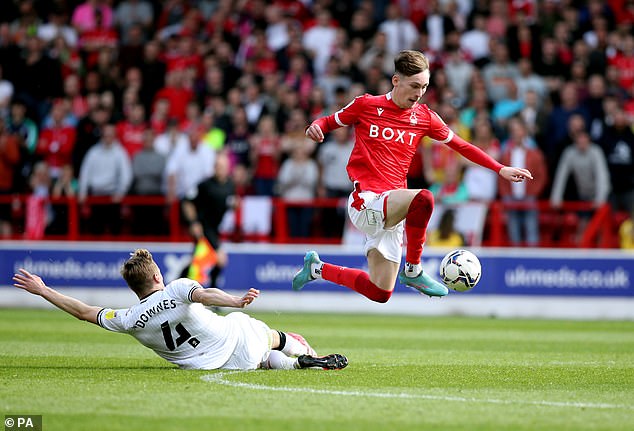 Despite reaching the play-offs in consecutive seasons with Swansea, it was no particular surprise to see Cooper depart in July.

There was a feeling on both sides that a natural conclusion had been reached and with little room for manoeuvre in the market, repeating Cooper’s achievement would have been a tricky task for any coach.

Russell Martin, Cooper’s successor, has taken the Swans to 15th in the table, eleven points adrift of a play-off spot after Forest thumped the South Wales outfit 5-1 at the City Ground on Saturday.

Cooper is at his happiest on the training ground, working with players. While he is not afraid to give his opinion in debates with the hierarchy, Cooper’s forte is his coaching and attention to detail. He used his brief break to spend time watching coaches in other sports, as well as observing bosses in other industries. Five years ago, he led England Under-17s to World Cup glory in India, with a squad including Phil Foden, Jadon Sancho and Conor Gallagher. 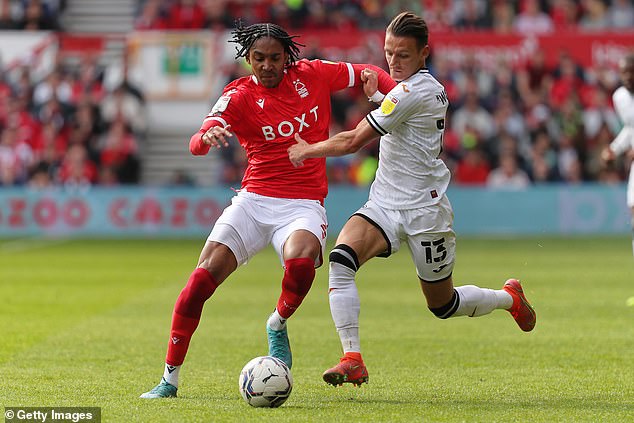 Djed Spence, 21, on loan from Middlesbrough, has been playing at a Premier League level

Cooper was named the Football Writers’ Association’s Manager of the Year for the Midlands thanks to his stellar work at Forest. But he knows this is no time to reflect.

After a few stumbles during April, Bournemouth bounced back at the weekend with a 3-0 win away to Blackburn Rovers, ending the Lancashire club’s playoff hopes, and the Cherries will be ready for the Reds.

But the chant at the City Ground on Saturday was ‘AFC Bournemouth: We’re coming for you.’ And you can be sure that Cooper and Forest will be doing exactly that when the whistle blows in this promotion blockbuster on the south coast on Tuesday night. After all, they’ve been doing it since September.