Cadiz have demanded a nine-minute replay – and threatened legal action – after a missed offside call cost them two points against Elche on Monday.

The hosts led with less than ten minutes remaining in the match when Elche’s Ezequiel Ponce equalised with a header in front of the penalty spot.

But moments before the finish, Ponce came back from a clear offside position to retrieve the ball and get his team’s attack going – a mistake that was left uncorrected by the linesman and VAR. 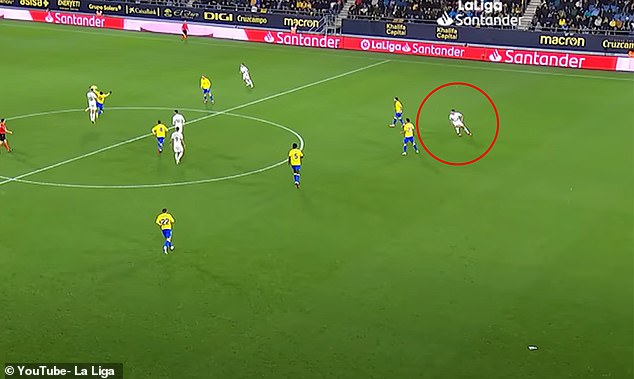 Now relegation-threatened Cadiz have issued a statement requesting the annulment of the match from the goal onwards, calling the mistake ‘resounding and flagrant’.

‘That said request is based on what, in the opinion of this entity, cannot be called a mere human error, but a serious and manifest technical arbitration error, motivated by the negligent and non-excusable action of the arbitrators of the VOR Chamber designated by the RFEF who, in the opinion of this entity, not only breached the applicable Laws of the Game, but also disregarded the current regulations regarding the principles and procedures regulated in the VAR Protocol,’ Cadiz said.

‘That, as it can be deduced from the images of the match itself, and even from the acts that have taken place since then, some coming from groups dependent on the RFEF itself, there is no doubt that the refereeing team made a manifest material error, serious, inexcusable and not justifiable, from which irreparable damage is derived for Cadiz. 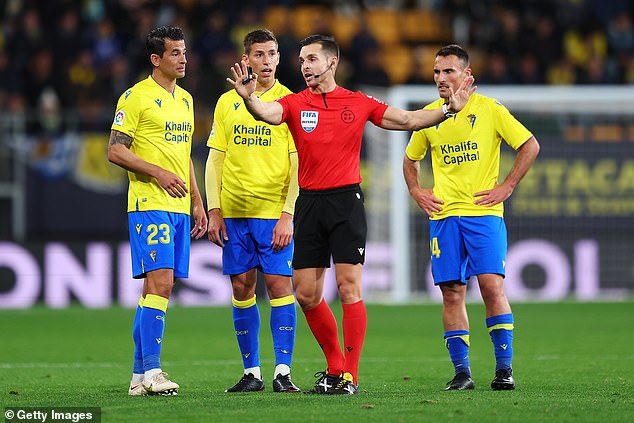 ‘Quite the contrary, if necessary at the end of the season, depending on the sporting and economic damages that may be inferred from the final classification of CÁDIZ, C.F., S.A.D. In the First Division category, this entity will evaluate the exercise of as many legal actions that assist it in law, including the action of patrimonial responsibility against the persons, physical or legal, that in the last instance must respond for the damages and losses caused to CÁDIZ , C.F., S.A.D.’

Cádiz coach Sergio González said referee Carlos del Cerro Grande talked to him after the game and apologized for the mistake, according to the AP.

And the club’s president, Manuel Vizcaíno, told Radio Marca on Tuesday that the apology didn’t do much for his club.

‘It was hard to sleep last night,’ he said. ‘There is nothing that can be done for my club now, I just hope it doesn’t happen to someone else.’

The notion that the goal was wrongly given has not been disputed by other Spanish referees.

In fact, they’re now calling for VAR to be aided by semi-automated offside technology after the costly mistake, with the referee’s technical committee making the request in a Tuesday statement released by the RFEF.

However, La Liga said it is up to the federation itself to implement the new technology, and said the referees and federation, ‘instead of assuming responsibility or apologising, are trying to transfer the blame to an organisation that is not responsible for making refereeing decisions,’ according to AP.

The mistake, if unfixed, could be extremely costly for Cadiz.

The club are currently 18th in the league with just three wins, and would face massive economic losses if they are relegated from LaLiga.