As you were, then. After a door swung open and opportunity knocked, Arsenal tripped on the step. So just like that, the balance of power in north London swung this way. And that.

What a pivotal day this could prove in the race for the top four. If you can still call it that while Arsenal remain in reverse gear. How many more chances will they have to wrest back control from Tottenham?

How many better ones than this? Southampton hadn’t won in the league for nearly two months. Before this Ralph Hasenhuttl’s side had lost five in six matches. And yet, after Spurs’ defeat earlier in the day, Mikel Arteta’s side dithered once more. 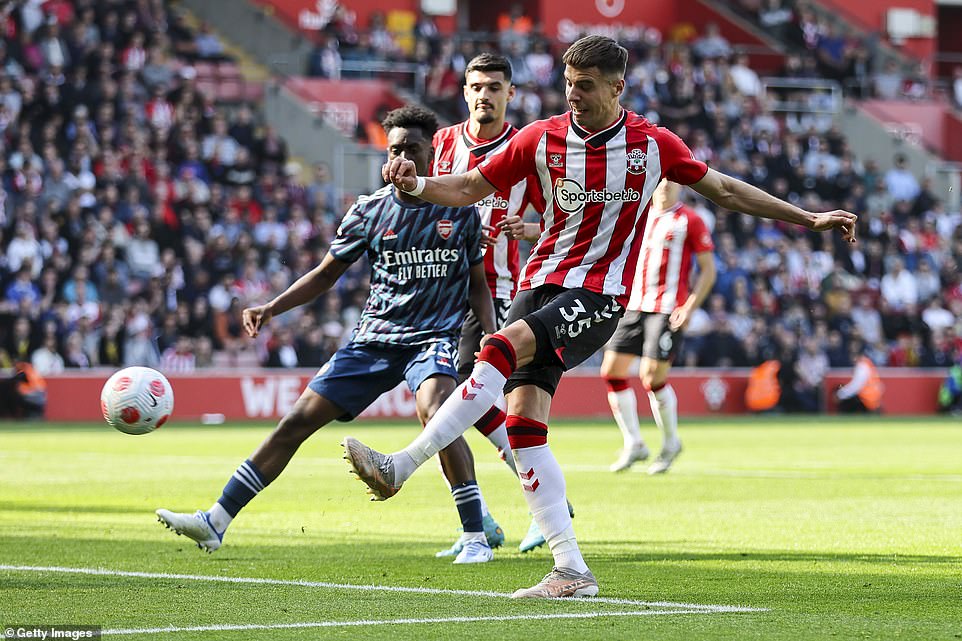 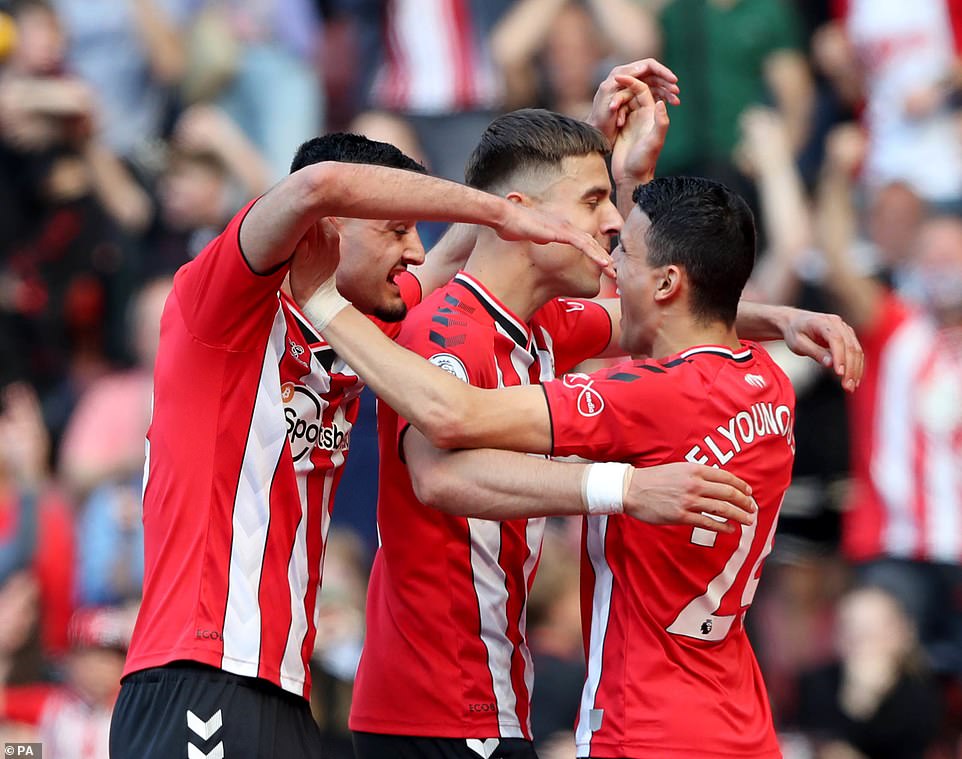 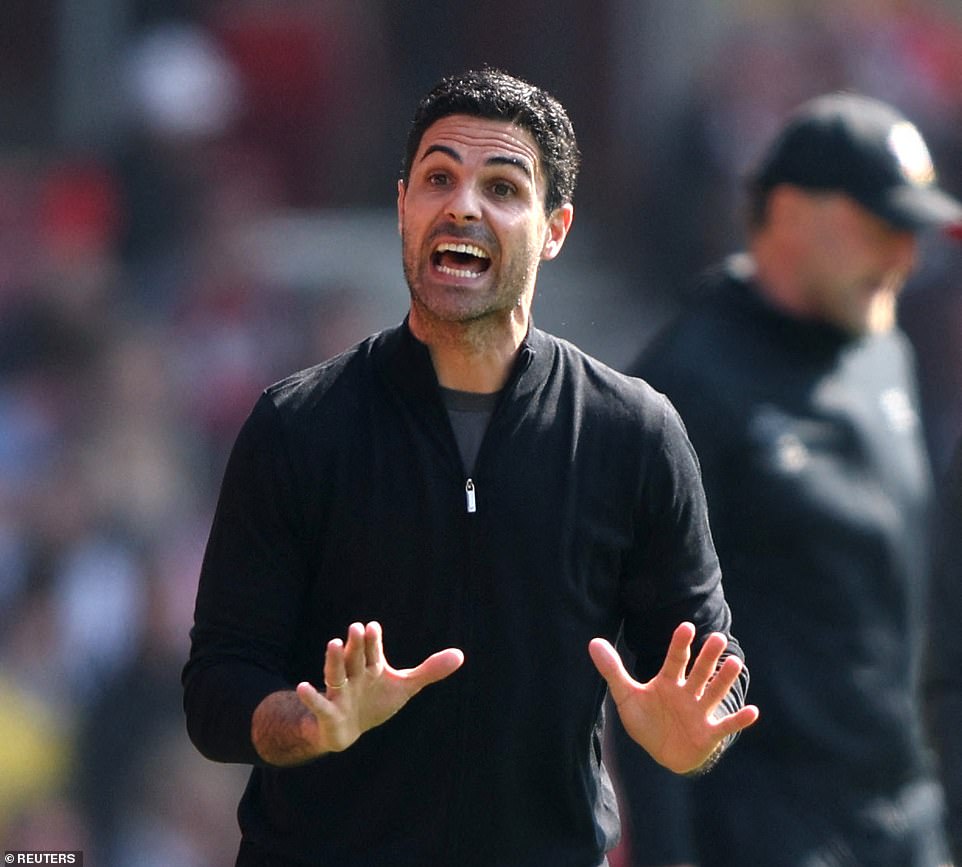 That is now four defeats in their last five games. Somehow, Champions League qualification remains in their hands. But the gap to Spurs remains three points and now Manchester United stand between Arsenal and fourth place, too.

This chance was spurned thanks to Jan Bednarek’s first-half goal. Arteta had, in fairness, predicted more twists and turns. At some point, though, his side might have to actually win a game. It took all of a few seconds for Arsenal’s supporters to begin flirting with fate.

‘Arsenal on the way to the Champions League,’ the away end bellowed immediately after kick-off – more in expectation than hope this time. Another Brighton hit-job in north London had shifted the mood once more.

Suddenly some of the pressure that swelled after consecutive defeats had eased and Arsenal played like it, too. Bukayo Saka had an early shot blocked; Gabriel Martinelli saw a curled effort beaten away by Fraser Forster. 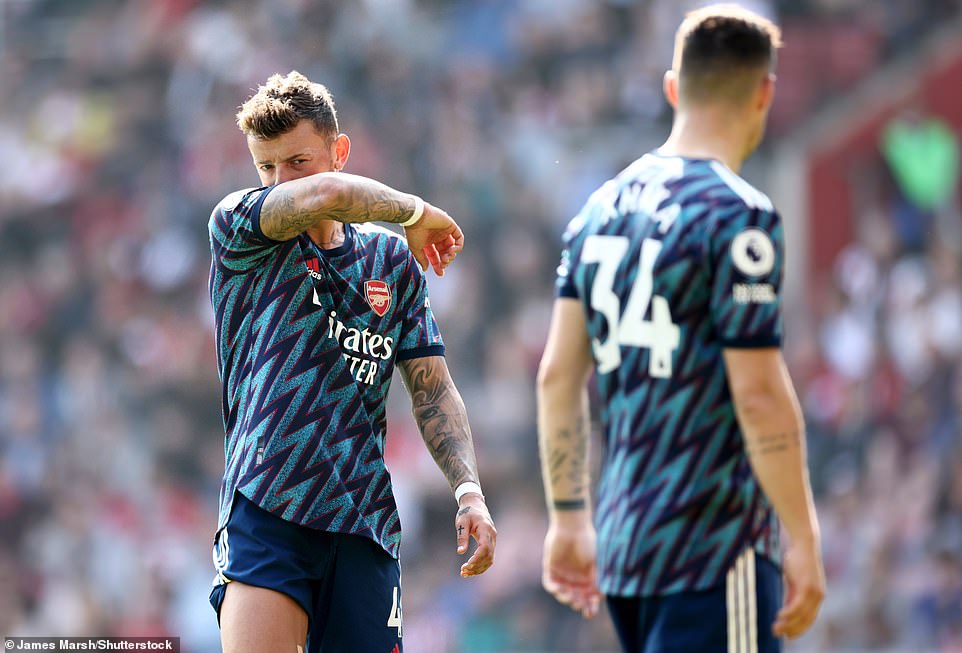 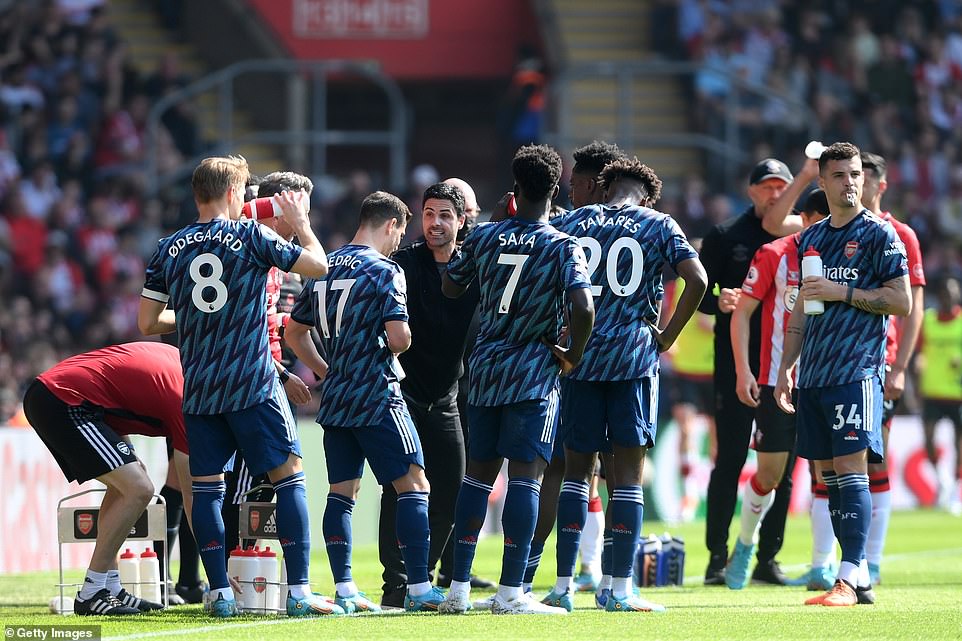 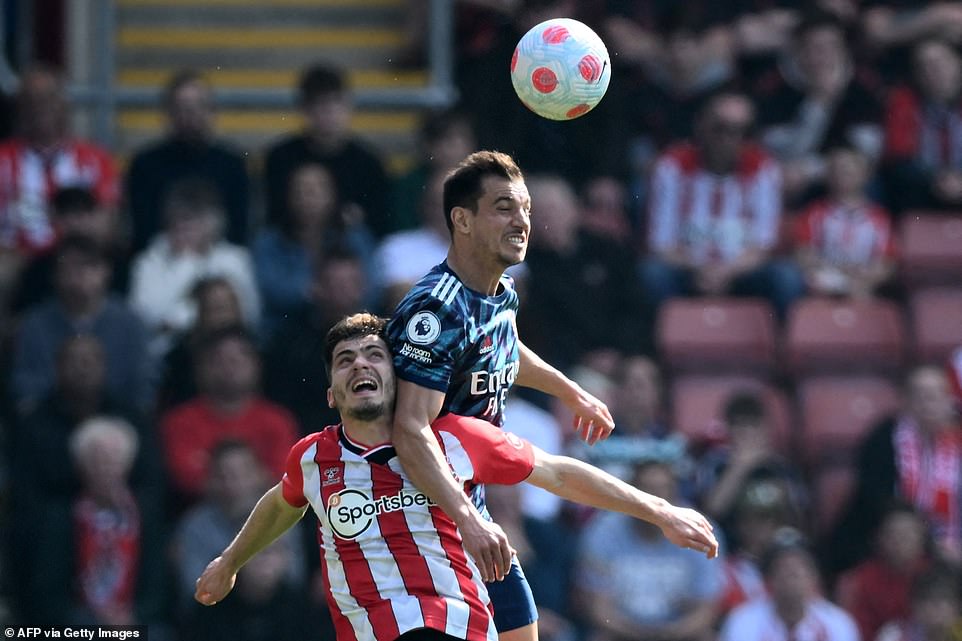 The absence of Alexandre Lacazette through Covid saw Martin Odegaard handed the armband and Eddie Nketiah given a start up front. That left Arsenal with a fresh-faced front-line, full of pace and promise. One that so nearly combined for the opening goal on 17 minutes.

Nketiah did well to intercept a loose pass and feed Martinelli down the right. His square ball ran all the way towards the back post, where Saka’s shot was kept out brilliantly by a scrambling Forster. It was a remarkable save but Saka ought really to have rendered the goalkeeper redundant.

The visitors still looked the more likely thereafter. Nuno Tavares, recalled following his nightmare at Selhurst Park, was a buccaneering outlet down the left. At the other end, however, Southampton had fired a few warning shots before they drew first blood. Stuart Armstrong forced Aaron Ramsdale into a low save before Armando Broja saw an attempted header deflected behind.

From the resulting corner, shortly before half time, Ramsdale punched clear towards Romain Perraud who, with his back to goal, hooked the ball back into Arsenal territory. 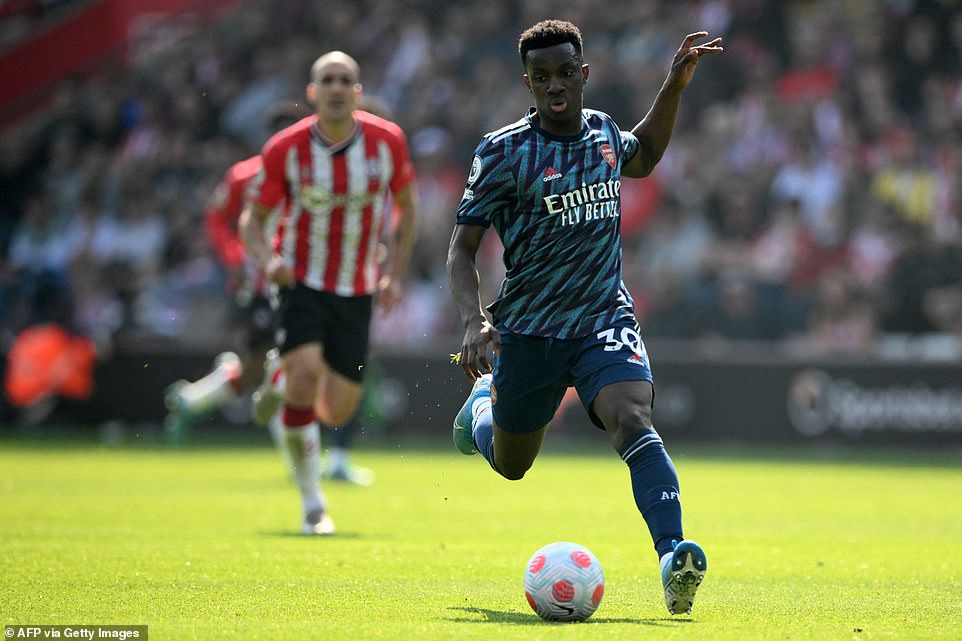 With captain Alexandre Lacazette missing out because of Covid, Eddie Nketiah made his first league start of the season 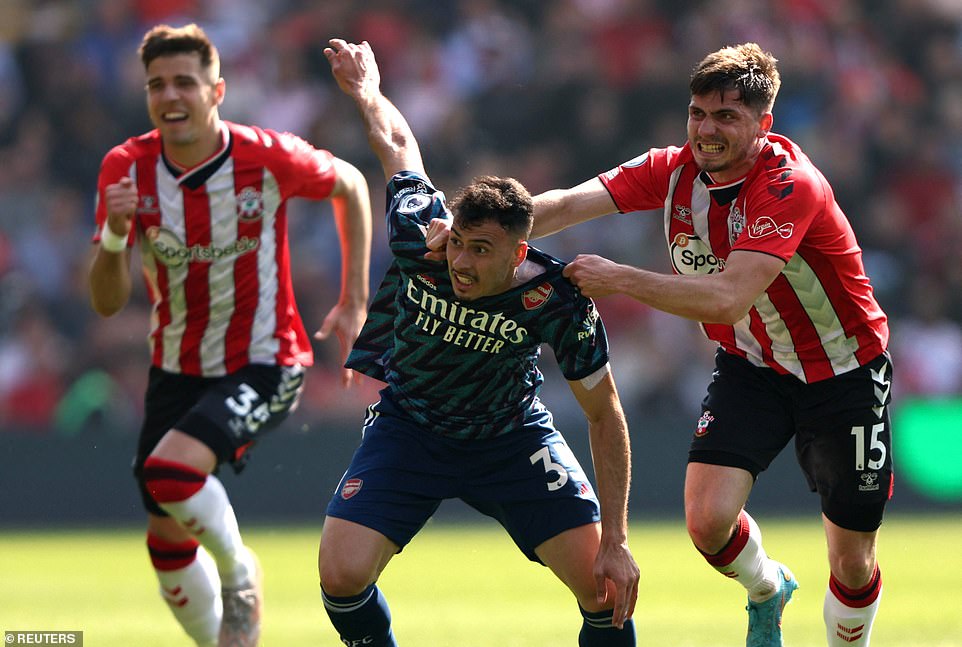 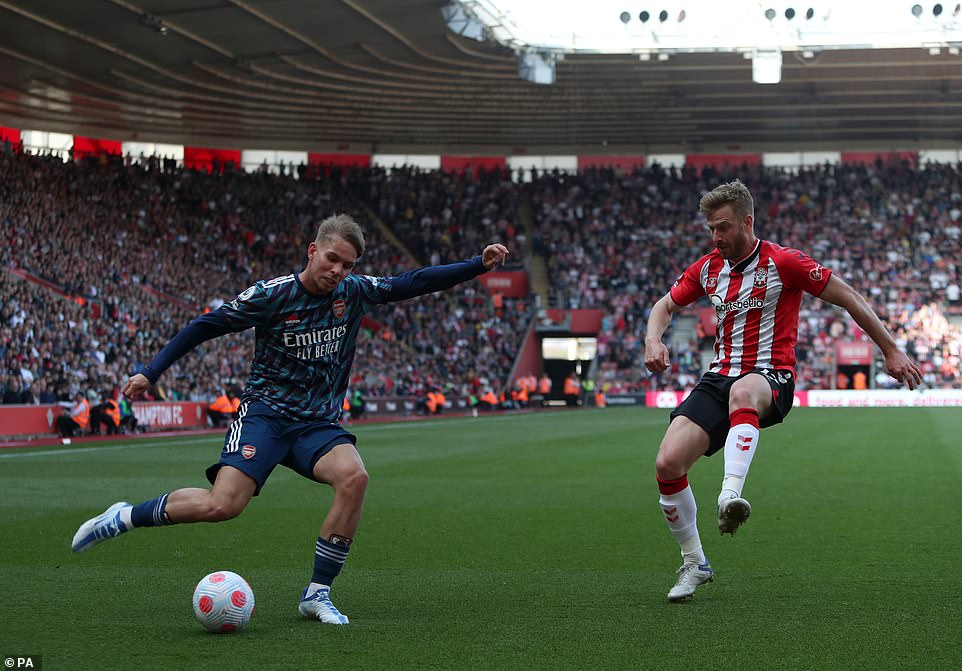 Mohamed Elyounoussi chased the lost cause to the byline before squaring for Bednarek to turn the ball beyond Ramsdale. It was an odd goal, befitting a rather curious first half, and another twist in the top-four race. Not that Saints cared about that one jot.

Hasenhuttl shuffled his pack following last week’s humiliation against Chelsea. They were 4-0 down at the break last week. This time Saints re-emerged with foundations on which to build and Arsenal struggled to knock them down. Nketiah flashed a neat flick across goal; both Martinelli and Odegaard sent shots into orbit.

It wasn’t until around the hour mark, and the introduction of Emile Smith Rowe, that pressure began to build on the Southampton goal. Saka curled an effort wide from 20 yards, substitute Nicolas Pepe hooked a shot past the post. And then Forster made a string of crucial saves.

The best came from Smith Rowe’s scuffed shot, when Forster clawed the ball from behind him. The goalkeeper then saved from Saka before Odegaard flashed wide and Arsenal’s fate was sealed.