‘See you soon!’ Man City further tease the arrival of Erling Haaland after their incoming striker tweeted a picture of him in full kit as a child… but he has still not been officially unveiled by the club ahead of £51m move

Manchester City have further teased the arrival of incoming striker Erling Haaland by responding to a Tweet from the Norwegian with a message of ‘see you soon’.

Haaland, one of the world’s most sought players, will officially join City from Borussia Dortmund on July 1 in a deal worth £51m.

City announced on May 10 that they had reached an agreement in principle with Dortmund to sign the 21-year-old but he has not yet been officially unveiled.

An event to reveal their big signing is planned following a social media campaign.

That appears to have already started as Haaland on Friday Tweeted pictures of him wearing a full City kit – with the name ‘Dad’ on the back in reference to his father Alfe Inge, who played for the club between 2000 and 2003.

Haaland captioned the two pictures with the phrase ‘to be continued’, accompanied by a ‘soon’ arrow emoji and a blue heart emoji.

City’s official Twitter account responded by saying ‘see you soon’ ahead of his impending arrival at the Etihad Stadium.

The club have also not yet confirmed what shirt number Haaland will wear. The Norwegian star is thought to prefer No. 9, which is currently held by Gabriel Jesus, who is expected to leave in the summer transfer window.

Earlier this month, Haaland previewed his transfer to City by posting a video of himself listening to Oasis hit Wonderwall.

Both Liam and Noel Gallagher, who formed the legendary band in the 90s, are huge City fans.

Haaland will come to the Premier League with a formidable record having scored 62 goals in 67 games for Dortmund. 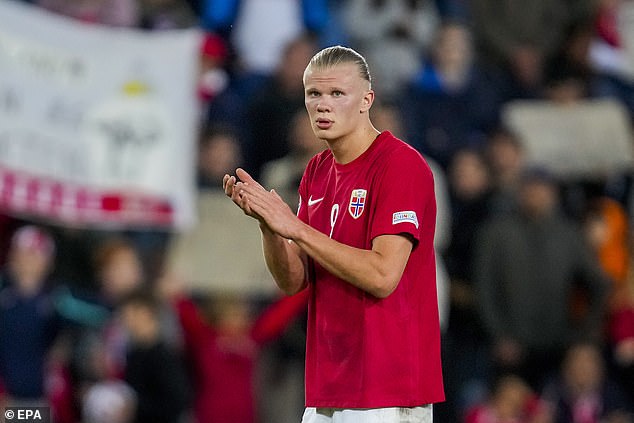