Talk about anti-climax. So much was riding on Saturday night’s Sydney derby: the early fortunes of both the Sky Blues and the Wanderers, for starters, but in a roundabout way, the fate of the A-League itself. This was the competition’s historic debut on Channel Ten, and it needed to be a cracker to get this supposed new era off to the right start.

So of course it was a scoreless draw. That’s not to say it wasn’t an absorbing contest at CommBank Stadium, where 23,118 raucous fans held up their end of the bargain by singing and chanting all the way through. It just didn’t end the way anyone wanted. 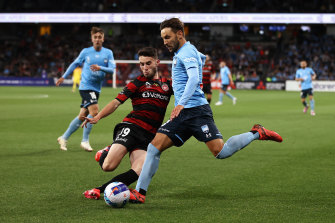 Milos Ninkovic tries to get a cross in at CommBank Stadium.Credit:Getty

Sydney FC will come away from it the slightly happier side. While they didn’t get the win they were looking for, they were missing three regular starters and still did enough to suggest they’ll be there or thereabouts again this season.

But for Western Sydney Wanderers and their coach Carl Robinson, the big question from last season remains. Largely outplayed at home – although they improved as the match wore on – it’s clear this new-look team will need time to gel.

It is time Robinson doesn’t have, and the Wanderers probably won’t give him after five consecutive seasons without finals football – although the late introduction of maligned ex-Premier League star Jack Rodwell, who nearly stole the show with a 30-yard thunderbolt with seven minutes to go, was a pointer in a promising direction.

The teamsheets told a tale of two rivals with vastly different approaches to recruitment. For Sydney, it was pretty much as you were. While Luke Brattan (suspension), Kosta Barbarouses (quad) and Bobo (calf) were missing, their starting XI looked very familiar, with only one new face – Elvis Kamsoba, who showed flashes of real improvement after being a whipping boy for three seasons at Melbourne Victory, and was one of the most inventive players on the park. 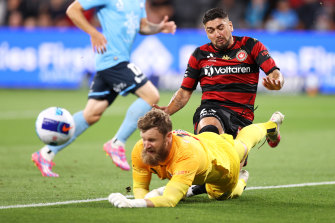 For the Wanderers, only two players from their starting line-up – Bernie Ibini and Thomas Aquilina – were with the club at the start of last season. The rest were brought in by Robinson, who starts this one as easily the A-League’s most under-pressure coach, and needs as many early wins as possible to keep the wolves at bay.

Perhaps it was no surprise, then, that the hosts were disjointed in possession throughout the opening half, as this new influx of recruits tried and failed to get a feel for one another. While the presence of new skipper Rhys Williams and his bushranger beard in the centre of defence added immediate steel to one end of the park, the likes of Ibini, Ramy Najjarine, Dimitri Petratos and Tomer Hemed were pretty much anonymous at the other, and there was little combination play in attack to get excited about.

Sydney looked far more comfortable on the ball early, fashioning the first genuine shot on goal through Milos Ninkovic, who proved yet again that age has not wearied him. Now 36 and surely in his last A-League season, the reigning Johnny Warren medallist was at his immaculate best, dazzling defenders and spraying visionary passes as only he can.

The Sky Blues also had the best chance of the first half, which came in the 32nd minute when Kamsoba whipped in a perfect ball from the right that picked out a free Trent Buhagiar, who started up front next to Adam Le Fondre. Buhagiar’s header was on target, forcing a terrific reaction save from Western Sydney’s new Spanish goalkeeper Tomas Mejias.

As the stalemate continued into the second half, the tension increased too, and neither side seemed able to deal with it adequately. Le Fondre kept peppering Mejias with shots, and Kamsoba kept probing with mazy runs, but there was no breakthrough. Perhaps Ibini should have provided it in the 68th minute, but he nodded Aquilina’s cross over the bar to cap another listless performance from him in red and black.

Then came Rodwell and his audacious long-range attempt to break the deadlock, which Andrew Redmayne somehow pushed wide. It was a fitting non-highlight to end a contest sadly devoid of drama – just the second time in 29 derbies that it ended without a goal.

Watch Messi, Neymar, Ronaldo and football’s biggest superstars in the UEFA Champions League with every match streaming ad-free, live and on-demand only on Stan Sport from this Wednesday 15 September.