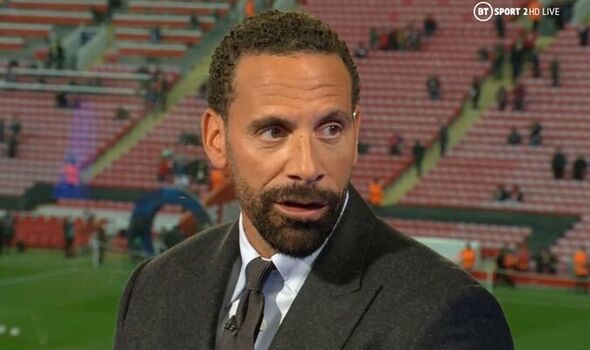 Rio Ferdinand has singled out four Liverpool players he believes are key to Jurgen Klopp’s side avoiding complacency in the second leg against Villarreal next week. Liverpool beat Villarreal 2-0 in the first leg of their Champions League semi-final at Anfield on Wednesday.

A Pervis Estupinan own goal put the Reds into the lead eight minutes after half-time before Sadio Mane doubled the advantage. Liverpool could have scored more on the night but will be huge favourites heading into the return leg in Spain next Tuesday.

Ferdinand says ensuring no complacency creeps in is key to Liverpool finishing the job. He claims captain Jordan Henderson as well as Andy Robertson, Virgil van Dijk and Trent Alexander-Arnold are the four “lieutenants” who will ensure that will not happen.

Speaking on BT Sport, Ferdinand said: “They have got to make sure that they fend off any type of complacency that could creep in, they can’t allow complacency to creep in anywhere. Yes, it is 2-0, but you still have an away tie, you have to go over there and give a professional performance.

“But the one thing that I will say about this team, is that they are a solid bunch, there is a togetherness there and they won’t allow [complacency]. The two people in that interview [Henderson and Robertson] there are two people who are lieutenants I feel behind the scenes, along with Van Dijk, maybe Trent now as well, who will control that culture against complacency. That is the thing that can trip you up.”

Henderson’s deflected cross went in off Estupinan to give the hosts a deserved lead. The Reds skipper enjoyed the bit of luck but insists work is still to be done next week.

Henderson told BT Sport: “They are a very organised team and we knew they would make it difficult. It was just important that we kept going and believe that we would eventually break them down. We did that with two good goals.

“First one was a bit lucky. Good build up but a bit lucky, in off the defender and keeper I think.

“But you need a bit of luck when a team plays with a low block. We got that and it lifted the crowd.

“Majority of the game, the counter-press was really good. It made it difficult for them. But the game is still alive and it will be tough in Villarreal.”