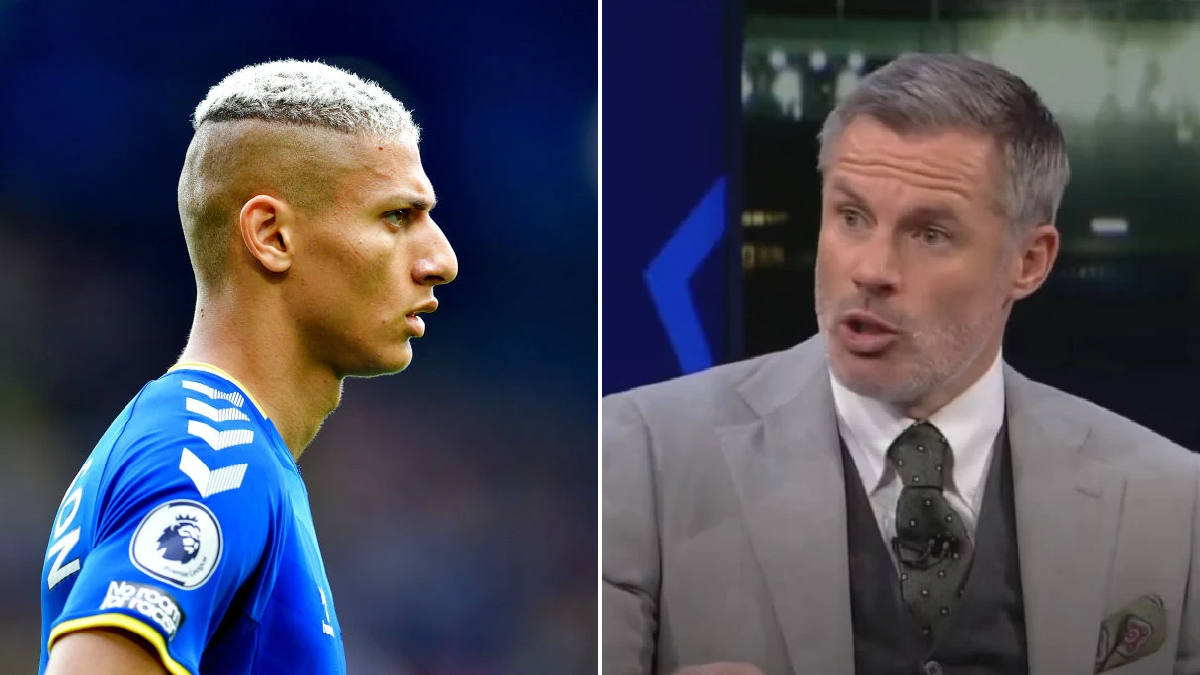 It appeared as though Everton’s fight for survival would go down to the final day of the season as Patrick Vieira’s Eagles took a 2-0 lead at Goodison Park on Thursday night.

Goals from Jean-Philippe Mateta and Jordan Ayew put Palace in control at half-time but Everton mounted a superb comeback and levelled the match through Michael Keane and Richarlison.

Richarlison tweeted at Carragher: ‘Wash your mouth before you talk about me and Everton and I don’t respect you.’

Carragher was left unimpressed by Richarlison’s play-acting during the Merseyside derby in April and Everton’s win over Chelsea last month.

He later said on social media: ‘Talking about Richarlison going down is nothing to do with bias.

‘Every Everton game I do he goes down three times like he’s got a big injury then just gets up! It’s not about getting a penalty or a foul but pretending he’s hurt when he’s not.’

Everton’s comeback win against Palace saw them climb to 16th in the Premier League, four points above the relegation zone.

Burnley were also in action on Thursday and held Aston Villa to a 1-1 draw to move level on points with 18th-placed Leeds United.

After Everton avoided the drop, manager Frank Lampard said: ‘It’s one of the greatest moments of my footballing life and career.

‘I’ve been very fortunate to have amazing times, especially at Chelsea as a player and a coach. But when you feel the feelings and desperation of what relegation brings to the table, it is different.

‘You need to dig in. You lose games, you fight to do something and then you lose another game. People think you should fly up the table and it’s never that way.

‘Coming in here three and a half months ago with my amazing staff, positive people who work so hard, and trying to affect things and getting a reaction from the players, from the fans and feeling unity when it looked split.

‘Nobody can question the celebrations at the end. It is easy to say “but you haven’t won anything”. You know what, come and work at this club for a few months and see the difficulties and what it means to people to stay in this league.

‘See us 2-0 down at half-time, playing poorly, a ridiculous second goal and then see the character they showed. See the fans on the pitch in good heart and spirit.

‘They have pulled us over the line, they have been more than a 12th man. But the players also deserve huge credit. An amazing night.’