London: Chelsea tightened their grip on third place in the Premier League with a 1-0 victory over 10-man West Ham on Sunday.

Elsewhere, Burnley beat Wolverhampton Wanderers 1-0 and Southampton drew 2-2 at Brighton. The late kickoff was the Merseyside derby between Liverpool and Everton at Anfield. 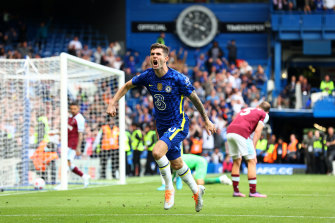 At Stamford Bridge, substitute Pulisic arrived in the box at the right time to guide home a superb pass by Marcos Alonso shortly after Jorginho had wasted his chance from the spot, firing straight at West Ham keeper Lukasz Fabianski.

West Ham defender Craig Dawson, one of their best players in a much-changed side, was shown a red card after a check by the VAR following a clumsy foul on substitute Romelu Lukaku, which resulted in the penalty.

Thomas Tuchel’s side ended a run of two straight defeats at home – against Brentford and Arsenal – but it is their forward line rather than defence that will concern the German manager ahead of their final few matches.

“He (Tuchel) just said to make a difference; to combine and make opportunities. It feels good to be more secure in the top four,” Pulisic, who replaced Timo Werner in the 76th minute, told Sky Sports.

“We needed a win at home and it feels great in front of our fans. We need to finish the season strong … some good league games and then a final (FA Cup against Liverpool). I needed to come in and make a difference and show I want to be playing.”

Seventh-placed West Ham made six changes to their starting line-up with an eye on Thursday’s Europa League semi-final first leg against Eintracht Frankfurt, a competition that offers them their best chance of reaching next season’s Champions League.

They looked on course to secure a point after N’Golo Kante’s deflected effort and Trevoh Chalobah’s rocket from distance drew saves from Fabianski, before Werner fired wide from a tight angle in the second half of a game that had few clear chances.

Victory meant Chelsea went five points clear of fourth-placed Arsenal, with a match in hand against Mikel Arteta’s side. They can consolidate their position with a win over struggling Manchester United on Thursday.

“It feels like a giant step. We have some games in hand. It was necessary and I’m glad,” Tuchel said of his team’s victory.

“The atmosphere is like this in the dressing room. We also deserved a bit of luck after the last results and how they were created here in our stadium.

“A big game now coming in Manchester. A good feeling with a late win. It lifts everybody’s mood.”