‘You cannot play good when the body language is not correct’: Pep Guardiola hints some of his City stars aren’t pulling their weight in training after disappointing draw with Everton – with Foden and Cancelo continuing to be left out

Sometimes it is hard not to feel sorry for Premier League managers. If they speak every few days, invariably there will be occasions when whatever they say whacks them on the nose almost immediately.

On Friday, Pep Guardiola was glowing about Manchester City’s reaction to the post-World Cup restart. He was ‘surprised’ at the high level of performances during victories over Liverpool and Leeds United, adding that it made him certain they were ready to give Arsenal a rough ride in the title race.

They probably still will, but City might find themselves 10 points behind the Gunners by the time they next play, at Stamford Bridge on Thursday, after chucking in a laboured display to only draw here. Everton were superb defensively, and stifled midfield for long spells, but City were nowhere near par. They ought to have won this three times over yet they failed the eye test and never truly looked like scoring. All of the ball, loads of shots and then the other team runs up the other end to score the only time they get anywhere near Ederson’s box. 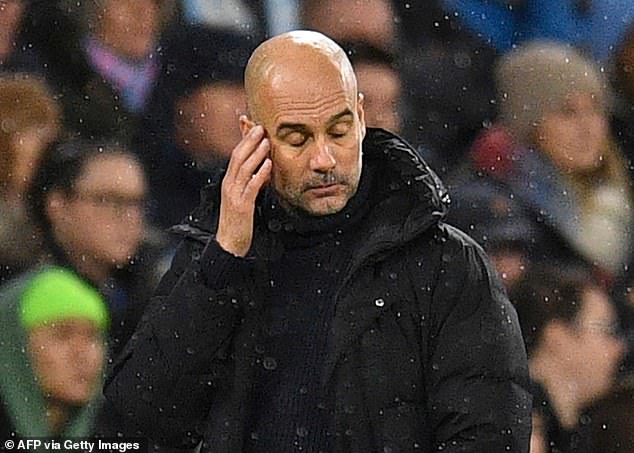 That film plays a couple of times a season at the Etihad Stadium — it just so happens that a home defeat by Brentford and a draw against Everton sandwich Qatar.

Guardiola always defends his group. ‘The way we’ve played in the last three games is one of the best since I’ve been here,’ he said. ‘We controlled long balls and second balls really well. We were better.’

The collective will rarely be publicly admonished — even when Guardiola has torn strips off them inside the dressing room. Criticising them outside their inner sanctum generally only occurs when City have won a game, as a motivational tool.

The same can be said of individuals, where he will back them to the hilt, and the revelation that Kalvin Phillips had come back ‘overweight’ last week was a definite outlier. Usually his messages to the squad are hidden inside answers about an altogether different topic and that was the case this weekend.

‘Every time it is difficult to choose the team for me — always top players are not playing,’ Guardiola said. ‘Lately, as I get older, I mainly look at the body language. In the training sessions and everything. You cannot play good when the body language is not correct.

‘Sometimes you choose the players for how happy they are. That is one of the main decisions with choosing the line-up, because with the skills, I know how good they are. The body language depends on them and sometimes they are not good and it is more difficult.’ 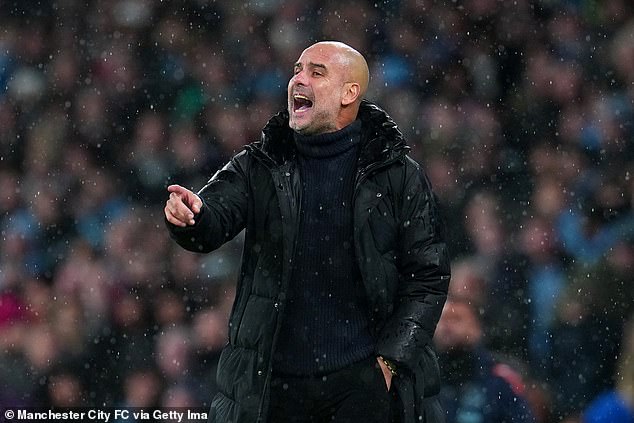 You are left to fill in any blanks to whom he is referring. Of the established players who are available, only Phil Foden, Joao Cancelo and Kyle Walker started all of City’s three matches in December from the bench. There may be mitigation with Walker, whose minutes might need to be managed after a groin injury, but the other two present intrigue given their stellar contributions in the last two title triumphs.

Nathan Ake has been told to continue at left back ahead of Cancelo, who has appeared shaky this season in a defence that has already conceded only 10 fewer goals than the whole of last season.

Foden, meanwhile, has started just one of City’s last six in all competitions. Jack Grealish and Riyad Mahrez are preferred in the wide areas and, on the surface, Foden’s ongoing omission seems confusing because City are undoubtedly a better team with him in it. But his selection, or non-selection, has now become a debated topic at both club and international level in recent months and that is unlikely to represent a coincidence.

‘I see something on the pitch, in the training sessions, and I use my intuition to use Jack in these games because he gives us extra passes,’ Guardiola said when asked about Foden, separately to his point on attitude. 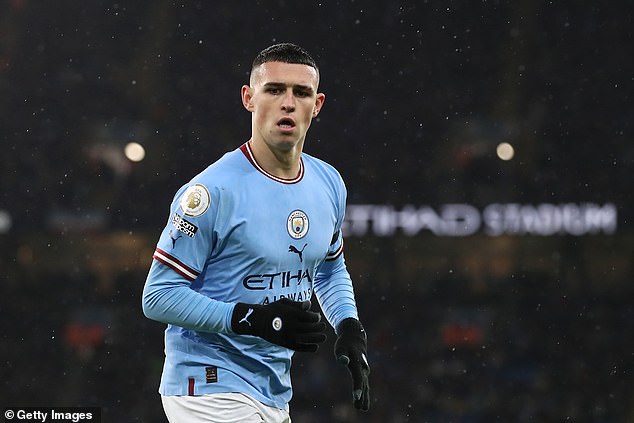 Phil Foden was backed by his Man City boss, despite just one start in their last six games

The City boss certainly has riddles to solve, particularly when faced by opposition who operate with five at the back like Everton.

Julian Alvarez, who returned early after triumphing at the World Cup, hopped off the bench in an attempt to steal a late winner and perhaps holds the key to stopping these results in the future.

He and Erling Haaland have started together three times this season. City’s aggregate score in those games is 11-0. Guardiola said that he is considering using them as a pair — but suggested he is uncertain. 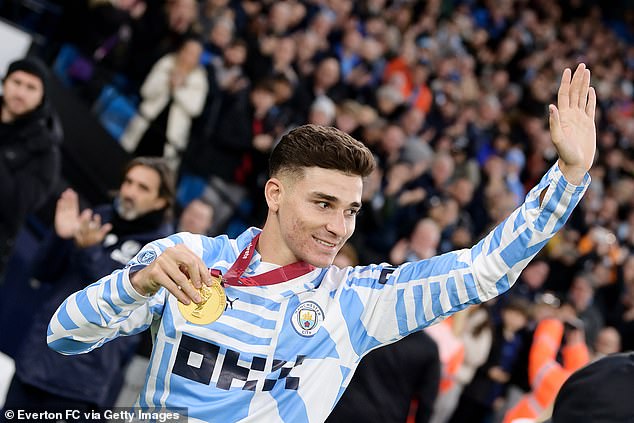 ‘It can happen, they can play together,’ he said. ‘The ball arrives (in the box) and you have two strikers there so you can score a goal. But to create these chances we have to make the process and sometimes for that you need other types of players.

Funnily enough, that was the problem for Demarai Gray’s stunning equaliser anyway.