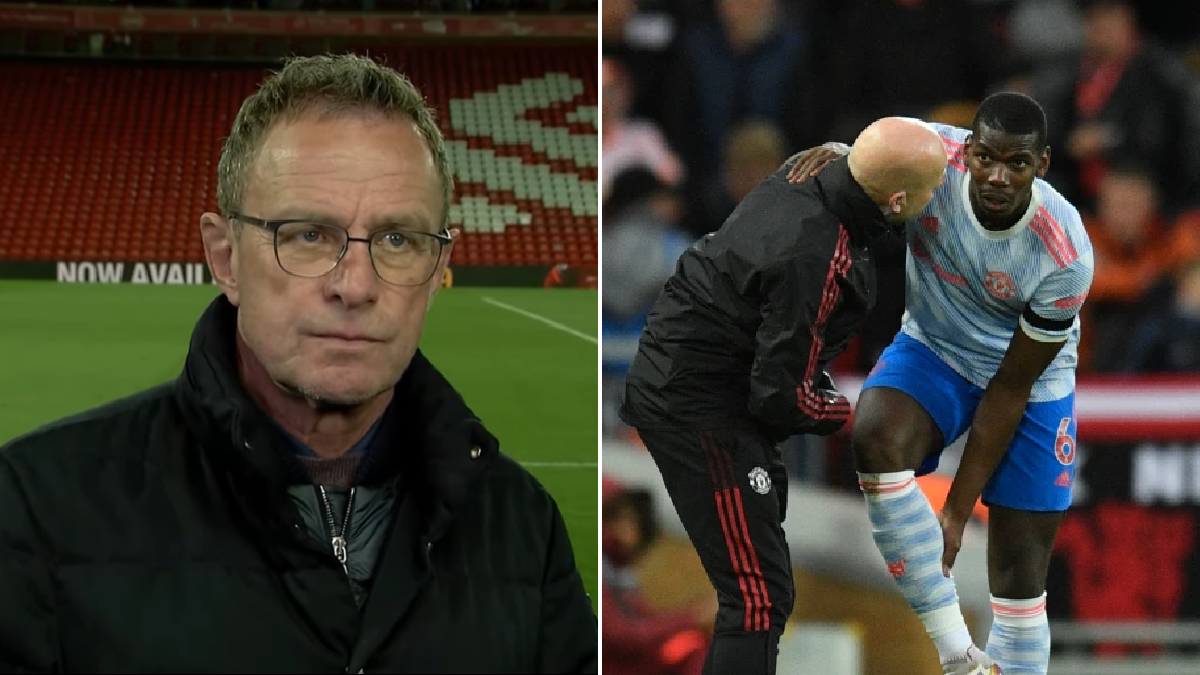 Ralf Rangnick does not expect Paul Pogba to play any part in upcoming matches against Arsenal and Chelsea after sustaining a muscle injury against Liverpool, while he eviscerated Manchester United’s injury record.

The Red Devils gave a meek and lacklustre performance at Anfield on Tuesday night, suffering a 4-0 defeat which damaged their top-four hopes, while they lost Pogba after just 10 minutes.

United’s clash with Liverpool was the first of a gruelling run of games which sees them visit Arsenal on Saturday lunchtime before hosting FA Cup finalists Chelsea the following Thursday.

Although Pogba still needs to be assessed by United’s medical team, Rangnick does not anticipate being able to select the World Cup winner anytime soon – though he did suggest Fred could be back in contention.

Asked about the extent of Pogba’s injury, Rangnick told MUTV after the match: ‘He pulled his calf muscle. As it seems right now this will be an injury not quite like the one Fred has that will be gone in one week.

‘I feel that he will not be available either for Arsenal or Chelsea.’

On the state of the squad as a whole ahead of travelling to north London, Rangnick continued: ‘I don’t know how many players will be available.

‘Hopefully we have a couple of them at least available but right now I don’t know. The game will take place in four days so for us it’s about only putting the focus on the next game.’

United are currently missing the likes of Luke Shaw, Edinson Cavani, Fred, Scott McTominay and Raphael Varane through injury and Rangnick feels the club must address and correct their woeful injury record.

Speaking to beIN SPORTS, Rangnick said: ‘[Pogba’s injury] is another issue, that’s now the seventh or eighth player missing out with injuries even though we’re only playing in one competition.

‘This also has to raise some questions. I’m not happy about that at all, but, as I’ve said, this is the sad truth right now and this is what we have to accept.’

Asked if he has any answers as to why United’s injury record has been so bad, he replied: ‘Liverpool are playing in four competitions and have nobody injured! So this has also got to do with: How do you train? What do you do? What kind of measures do you take in order to recover and be fully fit?

‘Those are questions that need to be asked and answered. Of course you can change it, other clubs have changed it, why should their players be fitter than our players? This is not something that automatically has to be like this.’