The 27-year-old was an Ireland youth international and made her senior debut in 2015 before turning her focus to Gaelic football due to a limited professional soccer pathway.

A planned pause turned into a long hiatus, exacerbated by Rowe’s decision to take up AFLW five years ago.

Rowe, who has trained with Ireland under coach Vera Pauw in recent years despite her playing absence, admitted she’d been unsure whether she’d make the squad again given she is contracted at Collingwood for next season.

But after Victory coach Jeff Hopkins was tipped off about her interest in a football return, Rowe started training with the A-League Women powerhouse, before signing with Collingwood’s blessings. 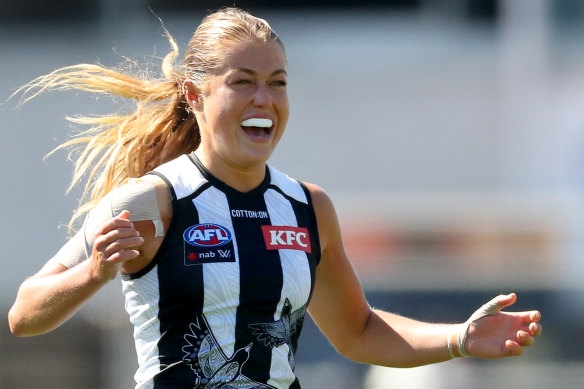 The winger has joined Victory initially on a three-week injury replacement deal for Melina Ayres (hamstring) and is eligible to play against Perth on Friday night.

If things take off, Rowe could even face the Matildas in Ireland’s World Cup opener on July 20.

“One can dream,” Rowe told AAP.

“I didn’t think that there would be an option to get back into the squad again, having been away for so long.

“Step one was getting back to playing soccer again, step two was getting signed to a club, which is Victory, step three is getting into the (Ireland) squad and then performing week in, week out.

“As a player you can never think far ahead with things like that because injuries and everything needs to go right for you.

“One can dream and obviously you always think big as a sportsperson but for now my focus is just on Victory.”

Rowe was part of Ireland’s golden generation that won their group and qualified for the semi-finals of the 2014 UEFA Women’s Under-19 Championship.

She admitted seeing friend and former teammate Katie McCabe shine at Arsenal had helped spark her interest in a return, which grew when she played briefly for her old club in Ireland two years ago.

“I finished on an abrupt note but I’d never felt like I’d finished,” she said.

“I’ve been away from the game longer than I’ve wanted.

“I just got a massive itch when I went back for a couple of weeks two years ago and I’ve been thinking about it since.”

Hopkins spoke to former Matildas goalkeeper and Collingwood skipper Brianna Davey about Rowe and was quickly convinced she would fit in.

The gun athlete is shaking off her rust with the round ball and Hopkins is certain she can make an impact at Victory, then a genuine run at Ireland’s squad.

“You can see at times the real quality in her game as well and the qualities that she’s got,” Hopkins told AAP.

“One thing she does have is a real determination. She’s a winner.”