Third-round exits in the FA Cup don’t come along very often for Arsenal. Unless, that is, Nottingham Forest are their opponents.

Failing to transfer their improved Premier League form to the world’s oldest knockout competition, Arsenal were beaten 1-0 by second-tier Forest on Sunday (Monday AEDT) in the second big shock of the third round – the stage where top-flight clubs enter the draw.

It’s only the second time in 26 seasons that Arsenal have fallen at the first hurdle. Forest were responsible for the other occasion, too, in 2018.

“We were not good enough,” Arsenal manager Mikel Arteta said, “and we have to apologise for it.”

Tottenham and Liverpool avoided the same fate as Arsenal, launching comebacks after falling behind at home to third-tier opponents. Tottenham beat Morecambe 3-1 and Liverpool won 4-1 against Shrewsbury.

By conceding an 83rd-minute goal to substitute Lewis Grabban at the City Ground, Arsenal became the highest-ranked casualty of this season’s FA Cup. 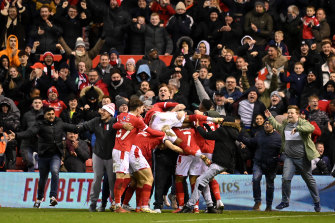 Nottingham Forest celebrate their goal as the fans erupt in the stands.Credit:Getty Images

So inept was Arsenal’s display that Arteta’s team failed to have a shot on target against Forest, the former European champions who have fallen on hard times since the turn of the century and are ninth in the Championship.

“It’s brilliant to get through and I hope the players now really believe in what we’re doing,” said Forest manager Steve Cooper, who is looking to lead the team back to the Premier League to play top-flight soccer for the first time since 1999.

It was in stark contrast to Arsenal’s recent performances in the Premier League, which have helped to lift the team into the Champions League positions. Just last week, Arsenal outplayed leaders and defending champions Manchester City before imploding after a second-half red card. 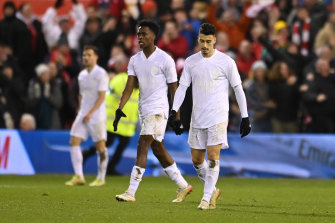 Arsenal wore an all-white strip for the match, instead of the usual red, in a stand against knife crime.

The FA Cup has served up some surprises at the third-round stage, no bigger than Newcastle losing at home to third-tier Cambridge United on Saturday.

A little bit of luck – or maybe it was pinpoint precision – proved crucial in Tottenham’s turnaround against Morecambe.

With his team trailing 1-0 after 73 minutes, Tottenham midfielder Harry Winks sent in a free kick from near the corner flag on the left wing and the ball flew over everyone and into the top corner.

“This one I meant,” Winks said, laughing.

Substitutes Lucas Moura and Harry Kane added further goals in the final five minutes for Spurs, who denied Morecambe a place in the fourth round for the first time in their 101-year history.

Liverpool started their comeback against Shrewsbury much earlier, equalising seven minutes after going behind in the 27th.

Kaide Gordon, one of five academy players handed a start in a youthful Liverpool line-up, became the second-youngest scorer in the club’s history – at 17 years and 96 days – with a coolly taken goal for 1-1 before Fabinho scored either side of a cheeky back heel goal from fellow Brazilian Roberto Firmino, who came on as a substitute. 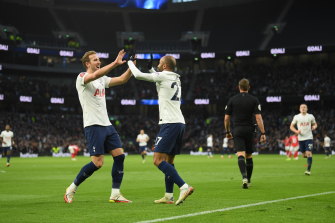 Liverpool manager Jurgen Klopp was back in the dugout after spending time in isolation following a positive test for the coronavirus, which came amid an outbreak at the club that led to the training ground getting closed for two days.

“This was the team we could line up today and the boys did really well,” Klopp said of his makeshift team.

West Ham won an all-Premier League match-up against Leeds 2-0, with the crucial opening goal – scored by Manuel Lanzini – controversially awarded after a potential offside against Jarrod Bowen. Leeds players complained about it on the field, and their chairman did so via his Twitter account.

Bowen added a second in the stoppage time as Leeds made a third-round exit for the ninth time in the last 12 seasons.

Many of the bigger teams have used the third round to give game time to their fringe squad members, but two players in particular didn’t take advantage of their opportunity.

Arsenal’s back-up left back, Nuno Tavares, suffered the ignominy of getting substituted in the 34th minute against Forest because of a poor display. He reacted by throwing his gloves to the ground in frustration before taking his place in the dugout.

Tottenham midfielder Tanguy Ndombele, meanwhile, was noticeably slow as he strolled off the field with his head down after getting substituted while his team was losing to Morecambe. The comparison with teammates Bryan Gil and Dele Alli, who were also removed as part of a triple change and sprinted off so as not to waste any time, was stark.

Ndombele, Spurs’ record signing, walked straight down the tunnel instead of watching his team’s fightback.

“I was a player and it happened sometimes to me that someone was unhappy with my performance,” said Tottenham manager Antonio Conte in an attempt to play down the incident.