Norwich 0-3 Newcastle: Joelinton double and Bruno Guimaraes strike push Canaries closer to relegation back to the Championship as Eddie Howe’s side put in dominant display at Carrow Road to move into top half

Few could have predicted that Joelinton, the man written off as a £40million flop, would become a cult hero at Newcastle.

His two first half goals at Carrow Road, on what was his 100th Premier League appearance, and a Bruno Guimaraes strike moved the Magpies into the top 10 and Norwich ever closer the trap door.

Joelinton has reinvented himself under Eddie Howe. The 25-year-old was signed as a big-money striker in 2019. Goals were expected, they did not come. He managed just four in his first season and two in the following campaign. 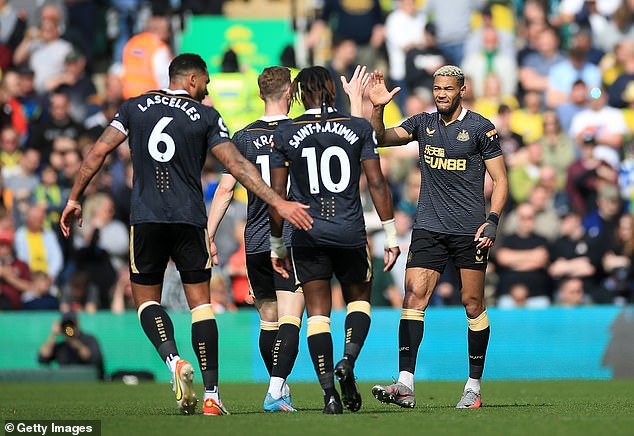 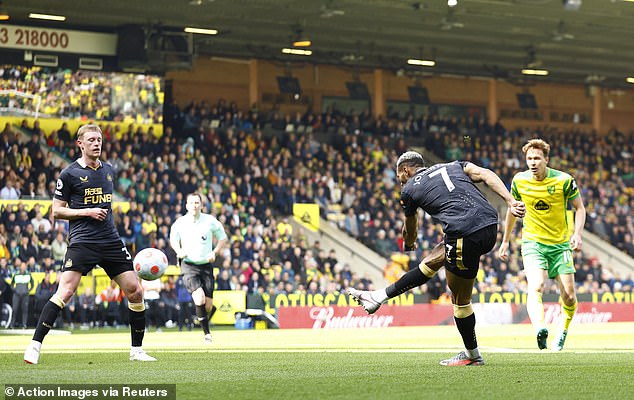 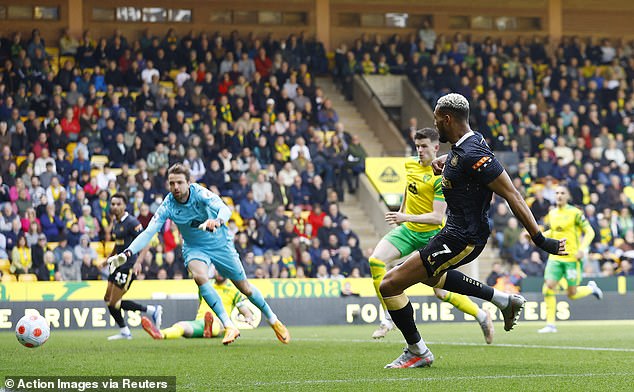 But this has been a breakout year for the Brazilian, who has thrived in a deeper role under Howe.

Only Joelinton and Declan Rice have over 30 contributions in defensive midfield statistics this season – which includes tackles, interceptions, clearances and aerial duels.

It was his standout performance against Manchester United back in February that first caught the eye – prompting Sky Sports’ Patrick Davidson to say ‘I didn’t know you were that good’ during the post-match interview.

Until this season, most of the Newcastle fans did not know either – they do now. The travelling away fans unveiled a flag for the Brazilian to mark his 100th top flight game and sung his name all game. He repaid them with two quick-fire goals at the end of the first half.

The first was a rocket shot which flew into the top right corner after the ball had dropped to him at the back-post. The second was a tap-in following some good build-up play from Guimaraes and Jacob Murphy.

The game was over by the 49th minute when Guimaraes pounced on Tim Krul’s weak pass to Kenny McLean before brilliantly chipping the ball over the Norwich goalkeeper.

The Canaries season may as well be over too. Their chances of survival before this afternoon were slim at best.

This was a must-win game if they were to have any chance of completing a great escape. Fans, players and staff must now be resigned to relegation.

Norwich and Newcastle both had five points when Dean Smith and Howe were appointed within a week of each other back in November. 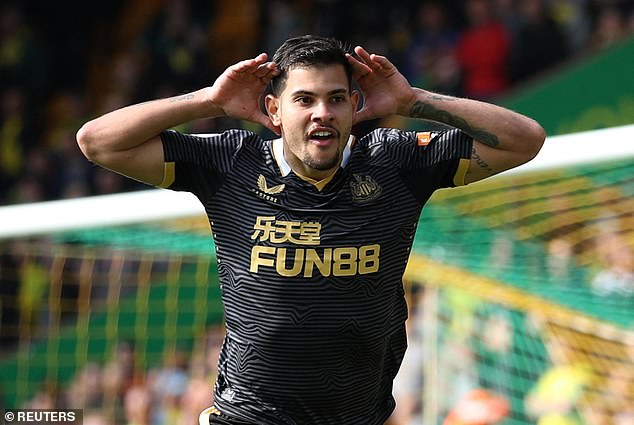 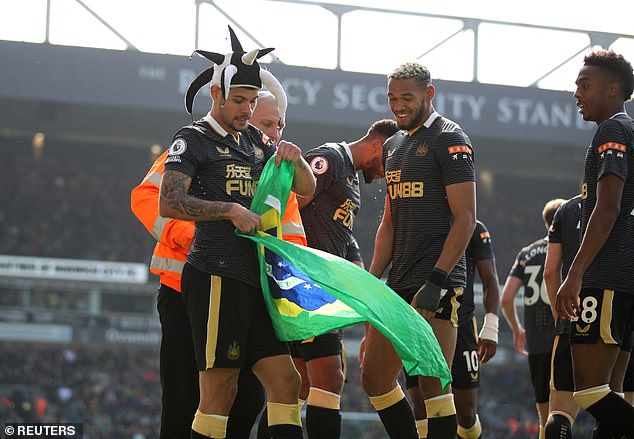 While Norwich have stayed rooted in the bottom three, Newcastle have propelled themselves up the table. They were winless when Howe joined the club.

Since then, they have won 11 matches. If they can stay in the top 10, it will be their highest finish in the Premier League since the 2017-2018 campaign under Rafa Benitez.

For Norwich, the Championship beckons. They had chances to open the scoring before Joelinton’s brace. First, Kieran Dowell volleyed over from close range after meeting Mathias Normann’s floated pass.

An even better opportunity presented itself to Dowell 10 minutes later. Pierre Lees-Melou released Teemu Pukki, who rounded Martin Dubravka before being forced wide. The forward did well to hold the ball up and cut-back for Dowell, but once again the midfielder fired over. 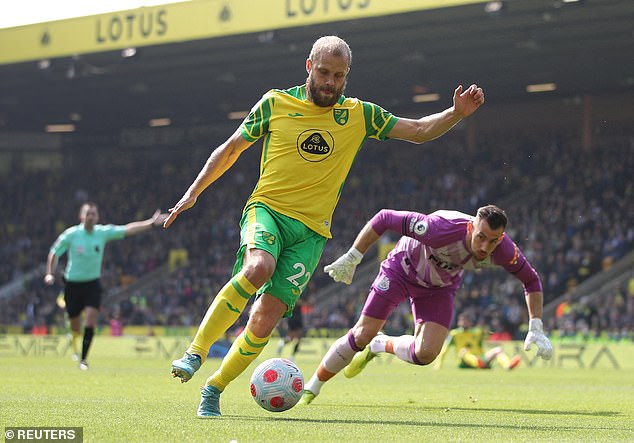 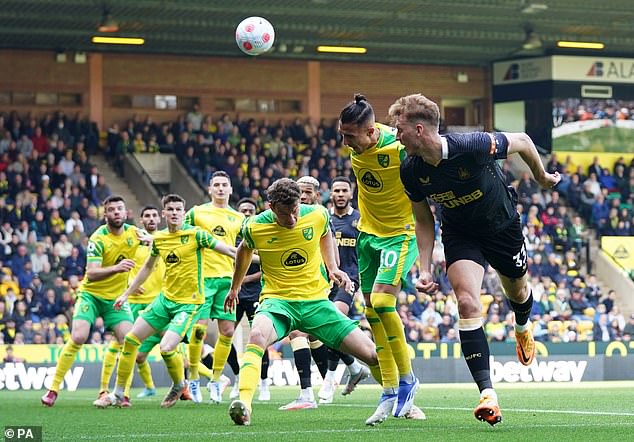 The Canaries have been too reliant on Pukki as a source of goals. The Finland striker is their top scorer with 10, Josh Sargent is second on two while eight players have one. That is why they will be playing second-tier football again next season.

Themselves and Fulham have become the perennial yo-yo teams of English football – with the Cottagers having already confirmed their place in the top flight for next season.

It will soon be five years since the two teams started a campaign in the same division. The 2017-2018 season saw the Cottagers promoted. A year later they were relegated, as Norwich took their place.

In 2019-2020, the reverse happened. This pattern repeated itself again last season and looks set to happen for a fourth time.

The Canaries cannot be mathematically relegated for another few weeks yet, but those inside Carrow Road this afternoon know the writing is on the wall.

Boos rang out from the home end at full-time. It is a matter of when, not if, relegation will be confirmed. 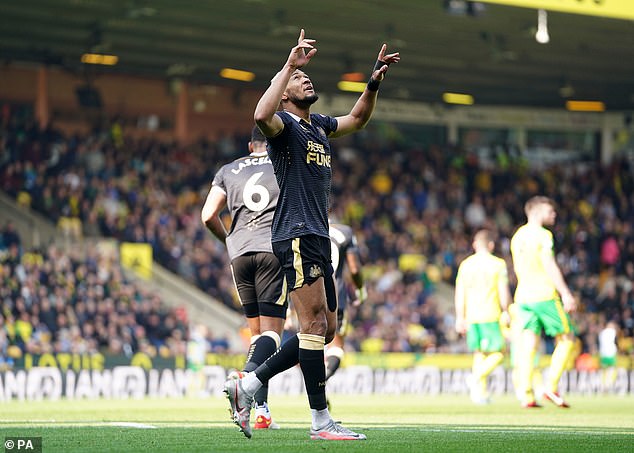