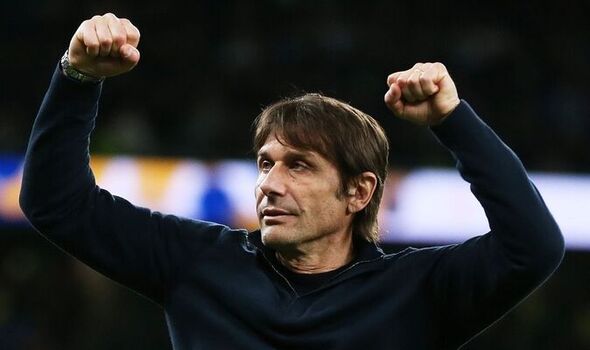 Antonio Conte’s Spurs took a giant leap towards the top-four on Thursday night when they created a night to remember with a 3-0 demolition of 10-man Arsenal. Tottenham were fired right up for this fiercely-contested north London derby from the get-go and their commitment to the badge paid dividends as Harry Kane netted twice in the first half before Son Heung-min put the game beyond reach.

Tottenham still need a favour from Newcastle or Everton if they are to finish fourth after 38 matches and Champions League football is the only way of totally guaranteeing Conte will be with the club next season.

The Italian is expected to remain with Spurs but has previously cast his future into doubt on several occasions – hinting he will walk if he is not backed by the board in the transfer market.

However, even if Daniel Levy is not prepared to dig his hands deep into his pockets to invest in new players, Conte can raise a substantial budget himself through player sales.

That’s because there is currently a lot of deadwood on his books, with most expected to depart at the end of the campaign.

Tottenham could recoup up to £166.2million (as per Transfermarkt valuations) if they negotiate smartly, although Fabio Paratici is likely to try and include Spurs players in swap deals.

One of the most likely to depart is Steven Bergwijn, who has failed to kick on after his late two-goal heroics at Leicester in January.

The Dutchman has failed to reach the heights expected of him after his stunning debut strike against Manchester City in 2020 and a return to Holland – with Ajax – is on the cards. He is valued at £16.2m by Transfermarkt.

Cameron Carter-Vickers is also expected to make his loan spell with Celtic permanent after impressing up in Scotland, where he has won the SPFL title with the Hoops.

Spurs have included a £6m option to buy the defender, who is also being tracked by other Premier League clubs.

Harry Winks, valued at £15.3m, is also set to end his stay with his boyhood club despite a mini-revival under Conte earlier in the season.

Defenders Davinson Sanchez (£27m) and Joe Rodon (£7.2m) could also move on after remaining on the fringes of Conte’s Tottenham team, although the Colombian did help Spurs earn a clean sheet against the Gunners.

Giovani Lo Celso is wanted by Villarreal on a permanent deal following a successful loan spell in Spain and he is valued at £19.8m – although Spurs will be expected to demand north of that figure given he cost a total of £55.3m from Real Betis in August 2019.

Although Lucas Moura is keen to see out his contract, Spurs are expected to entertain offers for the Brazilian, who is now worth around £15m.

Finally, Sergio Reguilon could make way with Barcelona among those interested in the Spaniard.

He has failed to perform consistently since joining from Real Madrid but is still thought to be worth around £25m.

Conte will have no qualms with losing any of the above, providing the board are able to secure respectable fees and worthwhile replacements for his Spurs squad…