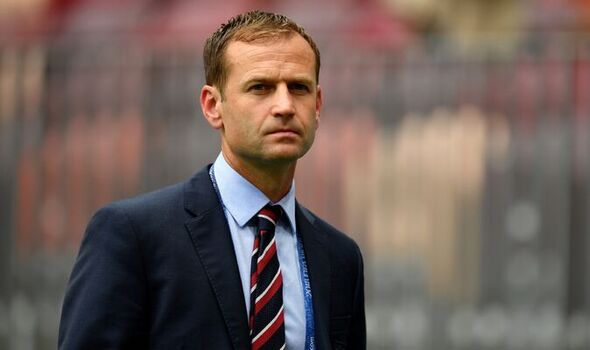 Newcastle announced the appointment of former Brighton transfer chief Dan Ashworth as their new director of football. With a sizable budget to work with, the Englishman could well make a marquee signing as his first addition at the club. Express Sport takes a look at four players who would represent an exciting first signing for Ashworth.

Lyon, Brazilian midfielders and Newcastle. We’ve heard this one before, haven’t we? Bruno Guimaraes’ superb form since his move from Lyon in January means he has been propelled to legendary status already by Toon fans.

His former team-mate Paqueta has also been excellent for the French side since his move from AC Milan in 2020, scoring 18 goals in 65 league games from midfield. And he could link up with his fellow countryman once more if Ashworth decides to firm up on Newcastle’s interest in the £50million attacker.

Matt Targett has been imperious for Newcastle since his loan move from Aston Villa in January, but a long-term deal is yet to be decided on. The Englishman would go back to Villa as second-choice left-back behind Lucas Digne and that would open the door for Newcastle to move for Lodi.

Lodi has been a mainstay in Atletico Madrid’s defence for three years and the Brazilian would represent an exciting change of direction in Newcastle’s strategy due to his attacking qualities, which are superior to that of Targett’s.

Diaby has been linked with the Magpies after a series of impressive performances for Bayer Leverkusen in recent years. The 22-year-old joined in 2019 from Paris Saint-Germain, and 35 goals and 37 assists in just 124 games has increased his profile and made him a hot prospect.

Leverkusen would demand a huge bid for his services given that he is one of their most valuable assets however. Yet Newcastle’s riches could mean it’s possible he makes a move to the north east.

Ashworth worked with Bissouma for Brighton back in his spell at the Amex Stadium, and could well do the same again by bringing him to Tyneside.

The midfielder has been a real star since his move to the south coast back in July 2018, and marshalled the midfield this season as Graham Potter’s men secured a top-half finish for the first time in their top-flight history.

Linked with Aston Villa, Liverpool and Arsenal in the past, the Malian is more than capable of holding his own in the top half. And with Ashworth’s links to Brighton, and previous links to Bissouma, a switch to St James’ Park is not unfeasible.